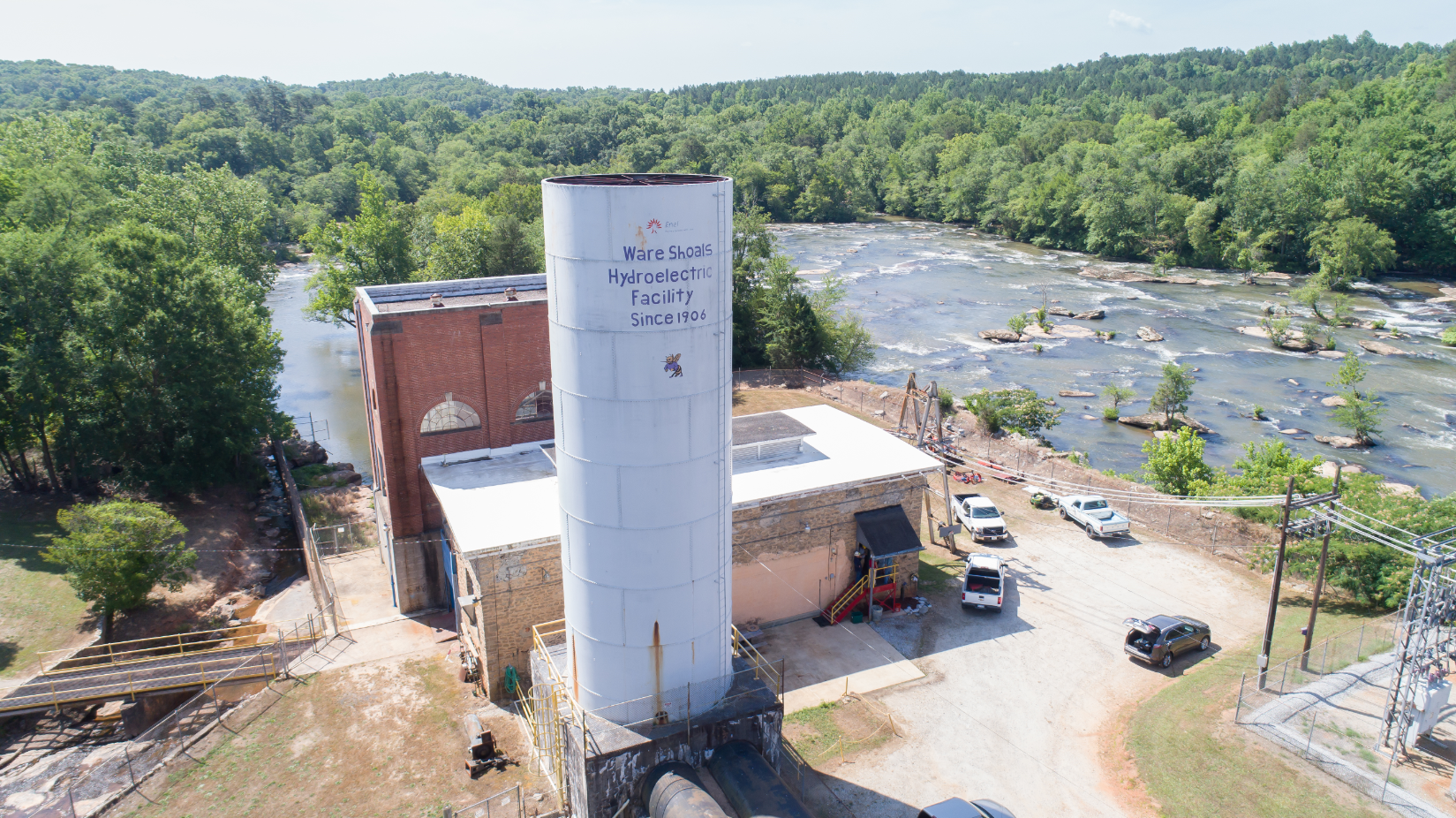 The historic 6.2-MW Ware Shoals Hydroelectric Project, located in South Carolina, was inducted into the Hydro Hall of Fame at the 2019 HYDROVISION International event. Established in 1906, the project has provided power to the town of Ware Shoals for over a century.

The 6.2-MW Ware Shoals Hydroelectric Project, located on the Saluda River in the U.S. state of South Carolina, was inducted into the Hydro Hall of Fame at the 2019 HYDROVISION International event. The Hydro Hall of Fame recognizes extraordinary achievement, with an emphasis on long-lasting facilities. Together, this prestigious group demonstrates the long-lasting and significant contributions of hydroelectric plants, including clean renewable power, emission-free generation, and reliability. Established in 1906, the Ware Shoals project has provided power to the town of Ware Shoals for over a century. This article explains how the historic hydro facility came to be, the changes made over the years, and how it continues to provide valuable electricity to the region.

Related: 2019 Class of the Hydro Hall of Fame inducted during HydroVision International

At the turn of the 20th century, South Carolina was experiencing new industrial growth, particularly in the textile industry. After the historical U.S. Reconstruction period reordered the state’s politics and economy, business leaders took advantage of new economic opportunities through renewed access to national markets. Reconstruction took place from 1865 to 1877, after the American Civil War. Textile mills were the backbone of manufacturing in the Palmetto State, as manufacturers took advantage of cheap labor and abundant cotton. However, the rapid expansion of the industry would require more than labor and raw materials. It would take power, and a lot of it.

The rushing rivers of South Carolina afforded manufacturers that power, and water wheels dotted the banks of waterways to power textile mills. In the town of Ware Shoals, located about 15 miles north of Greenwood, a small grist mill operated along the Saluda River. Senator Nathaniel Barksdale Dial of Laurens County envisioned the possibility of damming this river to power a cotton mill. To bring industrial growth to his part of the state, he sought to build a hydroelectric plant to power the textile mill.

Unfortunately, financial issues stalled the project, so Dial sold the textile mill to Benjamin Riegel. In 1902, Riegel founded the Ware Shoals Manufacturing Company and, in 1906, the hydro plant began operating to power Riegel Mill. The plant provided 4,800 horsepower to the mill, which contained 30,000 spindles.

Evolution of the technology

The Ware Shoals Hydroelectric Project is considered to be a run-of-river facility, with some headpond drawdown flexibility. The masonry dam is about 24 feet high, with 4.5 feet of flashboards on top. The dam spillway is about 500 feet long, and the right abutment includes a large tainter gate used for passing high flows as well as the minimum flows required in the bypass reach of the river for fish and wildlife preservation. The maximum reservoir drawdown is 3 feet, providing some usable storage capacity.

An earthen power canal diverts water from the Saluda River and flows about a half mile to the powerhouse. The original construction included four turbine-generator units, and 40-Hz generators produced electrical energy to supply the mill and nearby homes.

As consumer appliances and machines transitioned to 60 Hz, town leaders were required to find specialized suppliers, as all of Ware Shoals ran on the hydroelectric plant. Due to the increase of energy demand, officials installed a steam turbine at the hydro plant in 1922 to stabilize the power supply and reduce production curtailment

The first major upgrade to the Ware Shoals plant took place in 1939, when original Units 1 and 4 were replaced with a single vertical S. Morgan Smith Kaplan turbine coupled to a GE generator now referred to as Unit 1 (2.6 MW). With that replacement, generation was switched to 60 Hz, opening the town to the broader and rapidly advancing market of electrified home appliances. In the mid-1940s, the plant was modernized to sell electricity to the Duke Power Company, today known as Duke Energy. Aquenergy Systems, later acquired by CHI Energy, purchased the plant in 1985 and Enel Green Power then bought CHI and its subsidiaries in 2005.

Generation capability was again modified in 1983 when original Units 2 and 3 were replaced with a single horizontal Allis Chalmers Kaplan S-Tube turbine coupled to a McGraw Edison generator now referred to as Unit 2 (3.2 MW).

Additional major modifications to the project have taken place over the years, but the powerhouse, dam, canal and water-retaining structures still look similar to when they were constructed in the early 1900s.

Upgrades to the facility allow the project to operate more efficiently and safely. For example, the canal intake headgates were recently automated in 2018 redone with safer actuators that are also automated. Now, the canal intake gates are controlled automatically by unit water flow sensors and have means to close automatically.

Unit 2 was refurbished and automated with controls and a supervisory control and data acquisition (SCADA) system to allow for remote observation and operation of the unit by offsite personnel in 2017. Refurbishment and automation are planned for Unit 1 in 2021 as well.

While western South Carolina became a major hub for the textile industry, the region also faced headwinds as textile imports became more inexpensive. Ultimately, Riegel Mill, the centerpiece of the town’s economy and society for nearly a century, closed permanently in 1985. The closure of the mill, resulting in hundreds of layoffs, devastated the town. Nevertheless, the town of Ware Shoals has persisted, and, with it, its historic hydroelectric power plant has too.

EGPNA, part of the Renewable Energies division of the Enel Group, owned and operated the Ware Shoals Hydroelectric Project at the time it was inducted into the Hydro Hall of Fame.

Hull Street Energy (HSE) took ownership of Ware Shoals Feb. 1, 2020, with Central Rivers Power (CRP-US) operating the facility. CRP-US works closely with the town of Ware Shoals to ensure the safety and enjoyment of visitors to nearby recreation areas. The town park, a favorite place for Ware Shoals residents, is located along the Saluda River just downstream of the dam and upstream of the powerhouse, paralleling the power canal.

The Unit #1 overhaul is planned for the summer months of 2021.

Throughout the history of South Carolina, industries have come and gone, but the rushing waters of the Saluda River continue to flow. Indeed, Ware Shoals today is a different town in many ways from the one Nat Dial developed at the turn of the 20th century, but one constant remains: The Ware Shoals hydroelectric plant still produces clean, green energy from the Saluda River.

Beth Harris is operations manager for the South and West Region of CRP-US.

Editor’s Note: The 2021 class of the Hydro Hall of Fame will be unveiled during the opening keynote session of HYDROVISION International. Join us in Spokane, Wash., U.S., July 27 to 29. And if you have a plant that should be considered for induction in 2022, click here for a nomination form.