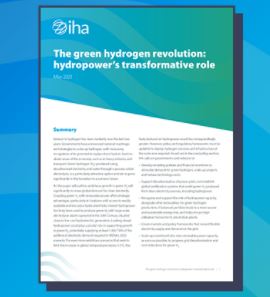 The International Hydropower Association (IHA) has released a research and policy paper that outlines how hydropower could be pivotal in supporting growth in green hydrogen.

Green hydrogen is produced through electrolysis using decarbonized electricity and water, and it is set to be an important component of the transition to net-zero carbon economies, IHA said.

Most hydrogen is produced from fossil fuels, but projections suggest renewable and low-carbon green hydrogen could grow dramatically and play a key role on the path to net zero. In its Transforming Energy Scenario published in its Global Renewables Outlook in 2020, the International Renewable Energy Agency (IRENA) said green hydrogen could supply up to 8% of overall global energy demand by 2050. More recent studies suggest it could be even higher.

The business-led Hydrogen Council says hydrogen could supply up to 18% of overall global energy demand by 2050, saving 6 gigatonnes of annual emissions and potentially creating a US$2.5 trillion per annum industry.

As the leading source of renewable electricity globally, hydropower is well-suited to producing green hydrogen and has played a leading role in this over the past 100 years, IHA said.

“Ambitious growth in green hydrogen will significantly increase global demand for clean electricity sources such as hydropower,” said Alex Campbell, IHA’s head of policy and research. “Looking ahead hydropower could potentially supply at least 1,000 TWh of the additional electricity demand required in IRENA’s 2050 scenario. For even more ambitious scenarios that seek to limit the increase in global temperatures below 1.5C, the likely demand on hydropower would be greater.

“To realize this potential, policyâ€¯and regulatory frameworks must be updated to deploy hydrogen services and infrastructure at the scale now required.’

In “The Green Hydrogen Revolution: Hydropower’s Transformative Role,” IHA calls on governments and industry to:

IHA is a non-profit membership organization whose mission is to advance sustainable hydropower by building and sharing knowledge on its role in renewable energy systems, responsible freshwater management and climate change solutions.