A method for determining the operational stability of tainter gates has been developed. The authors propose that this method be used to identify potential instabilities of operating gates and that it become a standard acceptance test upon completion of all new gate construction.

Tainter gates are used on dams worldwide for regulation and flood release. Frequently, tainter gates cannot be operated at small openings (less than about 5% of submergence depth) due to concerns about self-excited vibrations. In addition, these gates occasionally fail. For example, in 1967, a tainter gate at Wachi Dam in Kyoto prefecture in Japan failed at a small opening and was swept downstream.1,2 Another tainter gate failure occurred on July 17, l995, at Folsom Dam, California in the USA, possibly due to flow-induced vibrations.3

To determine how to prevent such gate failures, the authors have pursued a research program that involves laboratory testing of two- and three-dimensional model gates,4,5 full-scale field tests on operational gates,6,7 and theoretical analyses.8,9 The conclusion was that the underlying mechanism behind the failure of the gates at Wachi and Folsom dams was an essential dynamic instability to which all tainter gates may be susceptible.10 It is imperative to identify susceptible gates and take measures to prevent their failure. In 1991, the number of large dams worldwide approached 35,000; tainter gates are the most common spillway gate, with multiple gates at many of these dams.11

This article presents a method of excitation of tainter gates, analogous to impact testing of smaller structures, that permits identification of the dynamic characteristics, which are indicative of the gates’ potential for dynamic instability.

Tainter gate dynamics can be characterized by two predominant in-air natural vibration modes: the rigid body torsional vibration of the whole gate around the trunnion pin and a streamwise bending vibration mode of the skinplate.3,12 With the gate exposed to flowing water, these two vibration modes can couple through inertial and hydrodynamic forces.12 This coupled-mode vibration is accompanied by a fluctuation in the gate’s discharge and is capable of inducing violent, destructive self-excited vibrations.

Of special note is that the streamwise skinplate vibration induces a push-and-draw pressure, which does not consume energy from the vibrating gate but results in a large added mass effect that reduces the frequency of the in-air streamwise skinplate vibration mode in flowing water, often coming dangerously close to the rigid body rotational frequency. If the two frequencies coalesce, the comparatively small amplitude flow-rate-variation pressure can spontaneously amplify the coupled-mode vibration.

For the whole gate rigid-body vibration around the trunnion pin, this coupled-mode self-excited vibration can be represented by:

– Î¸ is the reduced vibration amplitude of the skinplate center;

– Ïˆ is the reduced vibration amplitude of the whole gate around the trunnion pin.

– Î¾aÎ¸ is the in-air damping ratio of rotational vibration around trunnion pin;

– Î±I’ is the non-dimensional moment of inertia; and

For the in-water streamwise vibration of the skinplate, this coupled-mode vibration can be represented by:

– Î´p is the pressure correction coefficient;

– Î±IÏˆ is the non-dimensional moment of inertia;

– rsa is the non-dimensional rotation radius; and

– FaÎ¸ is the basic Froude number.

Hydrodynamic pressure is absent from Equation 1 because the whole gate rigid-body vibration is excited by the inertia torque of the skinplate. In Equation 2, the first term on the right side represents the energy source that excites the streamwise vibration due to flow-rate variation under the gate.13 The dynamic stability diagram for the gate can be determined by simultaneously solving Equations 1 and 2, using numerical computer simulation.

Identification of the in-air and in-water natural vibration characteristics is essential in ascertaining the dynamic stability of tainter gates. In-air characteristics can be determined by experimental modal analysis using an impact hammer. In water, however, the energy that can be input with an impact hammer is insufficient because of the water’s large added mass. Instead, the tensile failure of a machined steel rod was used to input sufficient energy to excite the relevant mode shapes and provide accurate, repeatable data.

A small-diameter machined steel rod was installed between the bottom center of the skinplate and the spillway concrete. The gate was gradually raised in a step-wise fashion until the rod was loaded past its capacity and broke.

The diameter of the machined portion of the rod is critical to the method. If the diameter is too small, the impulsive load is insufficient to excite the vibration; if it is too large, too much excitation is provided to the gate and lifting system. The diameter was determined using the elongation-to-tension-load characteristics of the gate lifting chains. Based on our experience, elongation of the lifting wires/chains due to the load of the steel rod resistance should not exceed about 1 mm.

For correct testing, it was essential that the operator stop raising the gate immediately when the steel rod breaks. A load cell was attached in series with the steel rod to measure the tension load.

Field vibration tests with the steel rod breaking excitation were undertaken on 24-ton and 77-ton tainter gates in the USA, as well as 40- and 73-ton tainter gates in Japan. As an example, test results and the dynamic stability analysis of the 24-ton tainter gate, denoted as Gate T, in the USA is presented.6 The upstream water level at the tested condition was close to maximum design level. 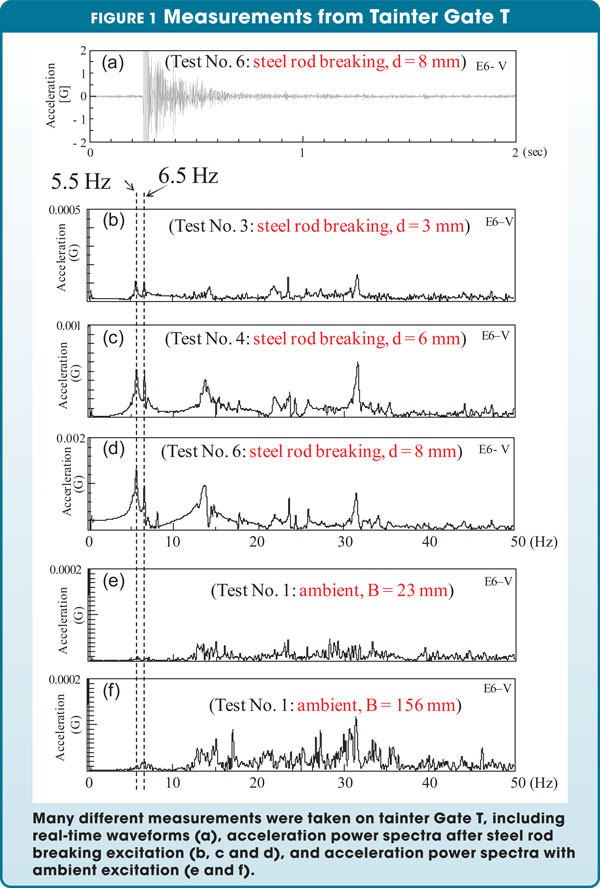 Figure 2 on page 38 shows the mode shapes extracted from the modal testing. Figure 2a shows the mode shape of the skinplate streamwise vibration with a frequency of 5.5 Hz. Based on the modal analysis, the whole skinplate performs a streamwise “parallel vibration” in the press-shut direction (when the skinplate moves in the downstream direction, the whole gate moves downward). The damping ratio estimated from the power spectra using the half-power method takes a comparatively large value of 0.016 to 0.03. Figures 2b and 2c show two vibration modes with a frequency of 6.5 Hz. The skinplate undergoes streamwise rotational vibration in Figure 2b while vibrating in the tangential direction in Figure 2c at the same time, suggesting a streamwise rotational vibration coupled with a vertical vibration.

The streamwise rotation center height is about 2 m from the bottom of the skinplate. The damping ratios take on values of 0.011 to 0.015. These damping ratios do not including Coulomb damping.

Ambient excitation tests were conducted on Gate T to assess their suitability in identifying the gate’s natural vibration characteristics. The acceleration power spectra, shown in Figures 1e and 1f, and measured at gate openings of 23 mm and 156 mm, respectively, show many higher frequency components in the 15 Hz to 40 Hz range. The spectra contain no significant peaks near frequencies that can be identified as modes of gate vibration from dynamic analysis. Therefore, it appears impossible to identify the in-water natural vibration frequencies for the dynamic stability analysis of the gate using ambient excitation.

At the measured values of Î©nwx = 5.5 Hz and Î©aÎ¸ = 6.5 Hz, the frequency ratio is 0.846. In addition, the in-air damping ratio was estimated to be Î¾ax = 0.03 for the skinplate streamwise parallel vibration. The point defined by these two values is plotted as the filled circle in Figure 3a on page 38. The location of the data point just above the stability curve indicates that the strength of the coupling of the parallel vibration mode with the whole gate rotation mode is insufficient to drive the coupled-mode instability, and the gate narrowly escapes instability. 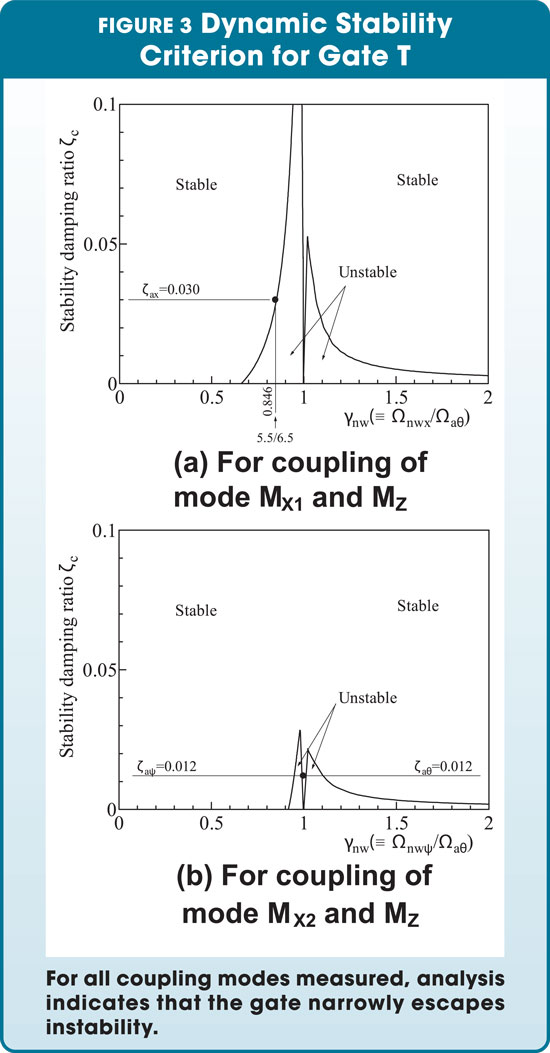 Similar calculations made for the coupling of modes MX2 and MZ produced the dynamic stability diagram shown in Figure 3b. The overall level of dynamic instability is far smaller than that of Figure 3a. The frequencies of Î©nwÏˆ = 6.5 Hz and Î©aÎ¸ = 6.5 Hz result in a frequency ratio of 1. The in-air damping ratio is estimated to be 0.012 for the skinplate streamwise rotational vibration. This data pair is plotted as the filled circle in Figure 3b. The location again indicates a narrow escape from the unstable region.

Based on this analysis, one may conclude that Gate T barely maintained its dynamic stability for the coupling of mode MX1 with MZ and mode MX2 with MZ.

As explained earlier, the in-water natural vibration characteristics of the tainter gates cannot be determined by ambient excitation. To discuss the essential dynamic stability and instability of the gate, it is necessary to conduct tests with impulsive excitation, such as the steel rod breaking tests. 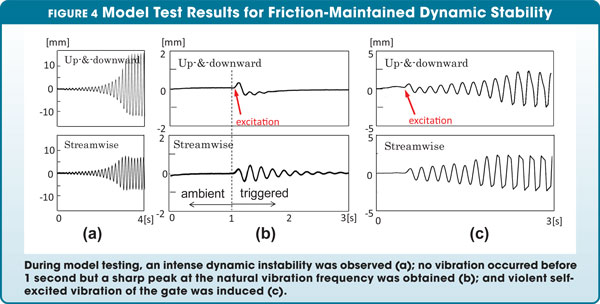 Under this unstable condition, rubber seals were attached to the sides of the skinplate to add Coulomb friction damping to the model gate. When water was discharged from a small gate opening in this state, no vibration occurred, as shown at times before 1 second in Figure 4b. This trace indicates the Coulomb friction maintained the appearance of dynamic stability, although the model gate has an essential dynamic instability. This trace is analogous to the measurement on the full-scale gate with ambient excitation.

Under the same conditions with the rubber seals in place, a weak vertical displacement trigger was introduced to the model gate. The clearly damped waveforms were measured and a sharp peak at the natural vibration frequency was obtained, as shown after 1 second in Figure 4. This is analogous to the measurement state for the steel rod breaking excitation in the full-scale gate.

When the amplitude of the displacement trigger exceeded the threshold value for the Coulomb friction, violent self-excited vibration of the gate possessing this essential coupled-mode dynamic instability was induced (see Figure 4c).

Through use of steel rod breaking excitation, the gates considered here maintained the appearance of dynamic stability due to Coulomb friction. In addition, it was clearly shown that the dynamic characteristics of full-scale gates cannot be accurately identified using ambient excitation.

The authors hope their testing method can become a standard acceptance test upon the completion of construction of all new gate projects and that it can be used as a tool to identify potential instabilities in tainter gate installations to assure the long-term safe operation of these gates.

The authors wish to acknowledge financial support provided by Grants-in-Aid for Scientific Research from the Japan Society for the Promotion of Science. Field vibration tests on the full-scale tainter gates were made possible through the special consideration, understanding and cooperation of the U.S. Department of Interior’s Bureau of Reclamation, U.S. Army Corps of Engineers and several Japanese gate companies. The authors wish to express their sincere appreciation to these people for their contributions to facilitate the testing.