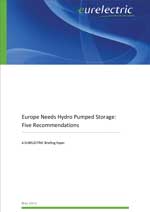 The paper was prepared by the hydro working group, which is chaired by Karen Seelos, who is vice president of international affairs for the power generation division of Statkraft Energi AS in Norway.

According to the paper, hydropower is Europe’s major source of renewable energy and pumped storage in particular backs up variable generation and delivers important system services to enable other renewables. However, further development of hydropower is hampered by five obstacles, the paper asserts. The five recommendations posited in the paper to remove these obstacles are:

– Remove double grid fees for pumped storage and consider a European scheme, in conformity with the Third Package (legislative proposals for electricity and gas markets);

– Establish a level playing field between pumped storage and other storage technologies;

– Reaffirm that pumped storage is a competitive, not a regulated, business;

– Address the trade-offs between environmental legislation and the low-carbon agenda; and

– Set up the European Single Energy Market without delay.

Eurelectric is an association representing the interests of the pan-European electricity industry, as well as its affiliates and associates on other continents.

Australian utility Snowy Hydro Limited has been awarded an Australian Business Award for Community Contribution in 2012. This year marks the third consecutive year Snowy Hydro has won the award in the industrial category.

“These types of accolades don’t come easily,” says Tara Johnston, Program Director for the awards. “They are underpinned by vision and leadership, both of which require a clear dedication to research and development.”

Alstom’s Renewable Power division is hoping to bolster its global reach by establishing a Global Technology Centre at its hydro industrial facility in Tianjin, China.

The GTC is part of a US$122.4 million investment announced in November 2010, which will eventually see Alstom Hydro China become a “full value chain entity.”

Alstom says the GTC had already begun research activities in July, and an additional laboratory is scheduled for completion at the site in summer 2013.

The company says the GTC was built in part to anticipate China’s hydroelectric boom, which is expected to grow by more than 65% from 2011 to 2020 – ultimately reaching a total installed capacity of 380 GW.

Trelleborg Sealing Solutions offers a glossary of commonly used engineering and sealing terms that can be accessed on the Internet or on an iPhone or android phone.

This free Sealing Technology & Engineering Glossary contains definitions for more than 2,000 terms. It is available online at: www.tss.trelleborg.com, or the app can be downloaded by searching for “Trelleborg” in the Apple app store or Google play.

The glossary can be searched via keywords or browsed alphabetically.

The bank says an assessment of hydro sustainability will guide the government in implementing master plans for hydropower in the next 30 years. Tanzania has many projects under consideration or development, including 90 MW Rusumo Falls, 388 MW Ruhudji, 222 MW Rumakali, 2,100 MW Stiegler’s Gorge, and projects on the Kagera River.

The consultant hired will assess the sustainability of existing and identified hydro schemes, including effects of climate change on future power production, upstream effects of human activity on hydro production, and proposals for adaptation investments and capacity development.

The Institute of Electrical and Electronics Engineers (IEEE) has produced two new standards for the hydroelectric industry.

IEEE Guide for Control of Small (100 kVA to 5 MVA) Hydroelectric Power Plants is a 56-page standard intended to provide a description of the electrical control and monitoring requirements for equipment and systems associated with small hydroelectric power plants.

IEEE Guide for the Installation of Vertical Generators and Generator/Motors for Hydroelectric Applications is a 52-page standard that describes the procedures for installation of all types of synchronous generators and generator/motors rated 5 MVA and above to be coupled to hydraulic turbines or hydraulic pump/turbines having vertical shafts.

The Zambezi River Authority (ZRA) will perform a feasibility study and environmental and social impact assessments for the 1,600 MW Batoka Gorge project on the border of Zimbabwe and Zambia. ZRA, which is jointly owned by Zimbabwe and Zambia, has applied for World Bank funding for the US$3 billion Batoka Gorge to be built on the Zambezi River between Victoria Falls and Lake Victoria.

ZRA plans to hire a consultant to review and update previous studies of Batoka Gorge and to help produce a full bankable feasibility study and tender design for optimal layout of the project. The study is to be used to help source financing for the project.

ZRA also plans to hire a consultant to undertake an environmental and social impact assessment that would involve reviewing and updating previous preparatory studies, evaluating the design, and developing the assessments as well as environmental management plans and resettlement action plans.