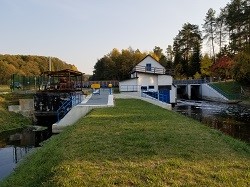 Thordon Bearings, through its subsidiary T-G DNALOP, announces it has been awarded a PLN1.3 million (US$328,933) grant from Poland’s National Centre of Research and Development (NCBiR) to design, manufacture and market a series of micro-hydro turbines in the 5 kW to 100 kW range.

The PLN 1.8 million ($455,446) project will mark Thordon Bearings’ entry into the hydro turbine market, after TG-DNALOP’s acquisition in March 2019 of the 67-kW Struzyska hydropower plant near Pila, Poland.

Thordon Bearings will collaborate with the Polish Academy of Sciences to develop a low-noise, pollution-free, high-efficiency, double-regulated Kaplan-type turbine based on permanent magnet technology.

“We are delighted that NCBiR has approved funding for the development of a new hydro turbine,” said Tomasz F. Jerzak, general manager of T-G DNALOP, Thordon’s manufacturing plant in Poland. “A key element in being awarded the grant is that the development will result in Poland’s first completely pollution-free turbine for sale to hydropower sites all over the world.”

Work will start in October to prepare the Struzyska facility for turbine manufacture and testing, with the plant’s existing 17-kW No. 2 turbine scrapped to make way for the new design. The other two machines will be completely refurbished to showcase the new turbine along with Thordon’s new range of water-lubricated turbine guide bearings, wicket gate bearings and face seals, all of which will be key features of the environmentally sustainable turbine. The first test hydro turbine is expected to be installed and commissioned at the Struzyska facility in December 2020.

While coal-fired power plants dominate the Polish energy market, renewable energy-based power generation is forecast to grow exponentially over the next decade as part of Poland’s long-term strategy for sustainable development. “Currently, hydro power makes up less than 2% of the total amount of electricity generated in Poland,” said Greg Auger, Thordon Bearings’ hydro and clean power business unit manager. “However, we understand that Poland’s objective is to increase their share of energy from renewable sources to 15% over the next few years including constructing small hydropower plants and modernizing existing facilities, so we hope to be an important part of this transformation.”