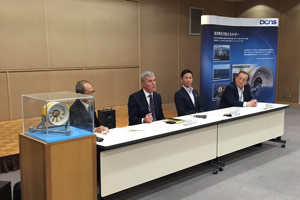 A consortium led by Kyuden Mirai Energy Co. has announced its plan to test what could become Japan’s first large-scale tidal energy project.

The plant, which would be located near Goto in Japan’s southwestern Nagasaki Prefecture, is expected to generate about 2 MW of power when it begins operation in 2019.

OpenHydro said site surveys are expected to begin this year, with procurement, fabrication and cable laying set to begin in 2017. The Scottish manufacturer will build the project’s generating unit in France before shipping it to be anchored on a subsea base built by Nippon Steel & Sumikin Engineering.

“This 16-metre turbine will be the first commercial-scale tidal device to be deployed in Japanese waters,” OpenHydro CEO James Ives said. “Through this demonstration project, we will work with our consortium partners to foster local skills and expertise.”

Once installed, the pilot turbine will undergo a year of tests that will, developers hope, lead to the development for larger installations around Japan.

“In the future, we will manufacture devices for commercial-scale arrays in Japan, underlying again the potential of the industry to create jobs and economic benefit where significant tidal resources are available,” Ives said. “As such, this test device is an essential step in the development of a tidal industry in Japan.”