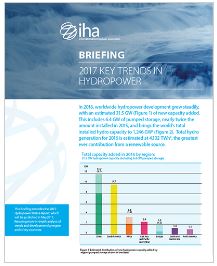 By comparison, the 2016 report indicated that about 33 GW of new hydropower capacity was commissioned worldwide in 2015.

“The latest data shows that the hydropower sector is continuing to grow steadily across the world, and we are seeing a renaissance in pumped storage development,” says Richard Taylor, chief executive of IHA. “This is indicative of hydropower’s increasingly important role in providing flexible support to renewable energy systems, as countries around the world take steps to meet the carbon reduction goals set out in the Paris Agreement.”

The briefing also outlines the most significant current trends affecting hydropower, identified through IHA’s media monitoring, outreach, and annual survey of the sector:

2017 Key Trends in Hydropower precedes the 2017 Hydropower Status Report, which IHA says will feature more in-depth analysis of key topics and regional activity. This report will be launched at the 2017 World Hydropower Congress in Addis Ababa, Ethiopia, in May.