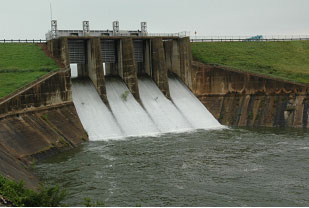 Tarrant Regional Water District (TRWD) is spending $1 million during the next three years for a team from the University of Texas at Arlington to study if recent earthquakes in the area have had any impact on dam safety at Eagle Mountain Dam in Tarrant County, Texas.

Eagle Mountain Dam and Lake are located about five miles northwest of Fort Worth, on the West Fork Trinity River just north of Lake Worth in northwestern Tarrant County.

Published reports indicate one of the TRWD dam safety engineers, Louie Verreault, said, “We hear these stories from southern California. They have a 6.0 earthquake, and suddenly, a dam failed. Well, we need to know what the impact is from the smaller ones.”

In 2007, TRWD asked Parsons Brinckerhoff Inc. to perform a comprehensive seepage and stability assessment of both dams at Eagle Mountain Lake as part of a proactive management strategy for its existing infrastructure, according to the Association of State Dam Safety Officials (ASDSO). “Although there were no indications of concern, TRWD wanted to assess each dam to provide confidence in another 80-plus years of service.”

In 2014, ASDSO awarded TRWD and Parsons Brinckerhoff its National Rehabilitation Project of the Year for their work to rehabilitate Eagle Mountain Lake’s spillway dam.

Verreault said the work conducted during the next 36 months would also help TRWD develop a framework to assess if future tremors might pose risks.