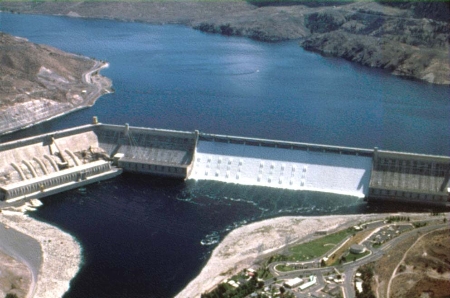 The U.S. Bureau of Reclamation’s Grand Coulee Dam was not damaged when a series of earthquakes rattled the area the area Tuesday morning.

According to the Pacific Northwest Seismic Network, a 4.2 magnitude earthquake was recorded at 9:42 a.m. with an epicenter about 25 miles north of Grand Coulee, with a aftershocks registering magnitude 2.0 about 20 minutes later and another of 1.8 magnitude about three hours later.

USBR said operation of the dam and the Grand Coulee hydropower project was not interrupted.

Grand Coulee has the highest cumulative generating capacity of any hydro project in the United States and supplies energy to 11 western states. The bulk of the 550-feet-tall, 5,223-feet-long concrete structure was completed in 1941, with the Third Power Plant added in 1974.