PULC’s greatest challenge was the 30-foot-tall Great Falls at Montague and the rapids below the falls. A log crib dam was built to divert water into a 2.5-mile-long transportation canal cut across level ground, bypassing the treacherous falls and a large bend in the river and rejoining the river just south of the confluence of the Deerfield and Connecticut rivers. The canal, completed in 1798, was 20 feet wide and included a series of locks each with a lift of 15 feet. Similar projects were under way in Hadley, Mass., as well as Vermont and Connecticut, and by 1828 six transportation canals had been completed. 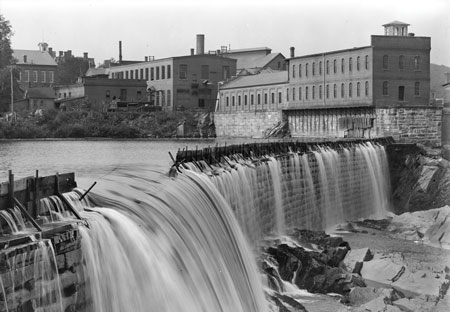 PULC ran a successful business charging tolls to freight boats until the 1830s, when newer steamboats too wide for the canals and the burgeoning rail business put an end to the water-based transportation industry. The last towboat bypassed Great Falls in 1856.

PULC successfully petitioned the Massachusetts legislature to relieve it of the obligation to provide navigation in 1854, and in 1860, Col. Alvah Crocker and other eastern Massachusetts investors purchased a controlling share of the stock. PULC was renamed Turners Falls Company (TFC) in 1866.

TFC built a stone-filled timber dam 1,200 feet long and 35 feet high across the river between the towns of Montague (east shore) and Gill (west shore). A power canal was built parallel to the river below the dam – 600 feet long by 50 feet wide and 10 feet deep. A headgate house was built on the Montague side of the dam to control the water flow from the river into the canal. Mill sites were laid out and water power was sold to manufacturing businesses to run their machinery.

By 1904, TFC decided to manufacture electricity, and renovations to the structure and canal began anew. New headgates were built at the dam and the canal was widened, deepened and extended 1,000 feet to the site of Turners Falls Station No. 1, where a 5-MW hydroelectric powerhouse was under construction.

By 1906, Station No. 1’s first 1-MW turbine-generator unit was producing enough power to supply the downtown areas of Turners Falls in Montague and Riverside in Gill. An agreement was reached with the Connecticut River Transmission Co. in Amherst and a 23-kV transmission line was built from Turners Falls to Amherst, 20 miles to the south. By the end of 1907, Turners Falls was sending power to Amherst.

Philip Cabot, representing a group of Boston-based investors, purchased holdings in TFC, Amherst Gas Co., Greenfield Electric Light and Power Co., and Easthampton Gas Co. in 1907. He became a director in all of these companies and a year later was president of three of them. New transmission connections and relay stations were built to expand the territory and pave the way for the next development – the construction of Station No. 2 (later named Cabot Station), which would allow the company to take advantage of the Connecticut River’s full 60-foot drop in height within its water rights.

Beginning in 1912, a new concrete dam was built below the old crib dam. The canal was widened to 128 feet and deepened to 18 feet, followed by the excavation of a new canal section 130 feet wide by 4,000 feet long and 25 feet deep. The end of the 2-mile-long canal widens into a forebay pond about 600 feet wide by 3,000 feet long. The size of the pond was designed to handle sudden load increases without excessive loss of head.

Upstream of the powerhouse, a wasteway was built with a concrete spillway and 12-foot by 10-foot wooden gates – 10 of them – mounted between piers. The wasteway can handle the full canal flow, to assist with sloughing ice flows from the canal and handle excess water following a sudden drop in load. The gates were operated by hoists controlled from the station switchboard.

The forebay leads to the head wall of the station, which contains 18 head gates (three per unit) operated using an electric gantry crane. The original crane was built by Exeter Machine Works of Pennsylvania and contained a trash collector for clearing the trashracks installed in front of the headgates. Each penstock is made of three concrete chambers more than 9 feet wide and 13 feet tall. They merge 60 feet from the intake and form a scroll case that sends the water through a set of stay vanes and into the turbines.

July 1914 saw the consolidation of TFC and Amherst Power into the Turners Falls Power and Electric Co. (TFPEC), a public utility falling under the jurisdiction of the Board of Gas & Electric Light Commissioners. Additional transmission lines were built with interconnections in Leverett, Chicopee, Agawam, Springfield and Ludlow. TFPEC quickly bought out several small utilities in these communities.

The 36-MW Station No. 2 came on line in 1916 with four units. The water wheels were vertical, single-runner type built by the I.P. Morris Co. and rated at 9,700 hp. The wheels drove the 7,500 kVa General Electric 66-kV, three-phase, revolving-field alternator at a normal speed of 97.3 rpm with a system frequency of 60 cycles.

In 1916 the units were placed in service and they contain Kingsbury thrust bearings, a technology that was patented in 1912. The original Kingsbury equipment is still in the machines and only the pads have been periodically refurbished.

In March 1917, an article about the construction of Station No. 2 was published in the General Electric Review: “…. the largest single hydroelectric development so far contemplated in the New England States and as indicative of the rapidly increasing industrial activities of the central Massachusetts section. Its interconnections with the Greenfield Electric Light & Power Co., the Easthampton Gas Co., the United Electric Co. of Springfield and the New England Power Co. make practically certain a continuous supply of power and show the increasing tendency of power companies to interconnect their lines for exchange of power in case of emergencies and unusually heavy demands.”

Almost immediately, TFPEC’s power load was growing beyond the station’s capacity. The upper canal walls were raised to gain additional head and the final two planned units were completed in 1918. Station capacity increased to 45 MW. At the same time, another substation in Springfield and new transmission lines from Granby to the Mount Tom substation were constructed to send the power further afield.

A second article appeared in the General Electric Review in November 1919, authored by F.L. Hunt, chief engineer of TFPEC, who addressed “the economics that can be effected by the use of power from large central stations, equipped with up-to-date machinery, and the economical use of water power. He shows that by closing down 121 isolated plants and using central station, supply nearly 400,000 tons of coal was saved in one year.”

Cabot spent 12 years building the company, but resigned due to poor health in 1919. The remaining directors renamed Station No. 2 to Cabot Station as a tribute to his efforts.

In the late 1920s when New York- and Chicago-based financial institutions were buying up utilities, TFPEC joined eight other utilities to create a voluntary trust, the Western Massachusetts Co. Over the years, smaller utilities merged with the larger ones, and by 1942 the four remaining utilities (TFPEC, Pittsfield Electric Co., United Electric Light Co., and Greenfield Electric Light and Power Co.) had consolidated as Western Massachusetts Electric Company (WMECO).

Northeast Utilities invested heavily in developing nuclear power in New England in the 1960s, which led to the construction of the 1,080-MW Northfield Mountain Pumped Storage Station a few miles north of Cabot Station in 1969. The project was designed to pump water for storage and later generation use to even out the peaks and valleys in the demand for electricity in conjunction with the nuclear energy baseload.

The new plant required changes to the dam at the head of the Turners Falls power canal to increase the storage volume of the 20-mile-long pond on the Connecticut River between the Vernon, Vermont Dam and the Turners Falls Dam (the additional storage acts as the lower reservoir for the Northfield Mountain station). The Connecticut River and its tributaries contain about a 1,000 dams used to store spring freshet waters and to control the flow of water, for agriculture, flood control and hydroelectricity.

Turners Falls Dam consisted of the sections in Montague and Gill, which were connected by a natural rock island known as Great Island. The modifications to the 630-foot-long Montague spillway included raising the height of the fixed crest section and replacing 480 feet of flashboards with four bascule gates 120 feet long by 13.3 feet high. A new Gill Dam was constructed on the western shore downstream of the 1912 dam and three tainter gates were added, each 40 feet wide by 39 feet high.

The Northfield Mountain control room operators began to remotely operate the units at Cabot Station in the 1990s. In addition, the bascule gates on Montague Dam and head gates at the gatehouse are operated from Northfield Mountain.

Three fish ladders were installed at the Turners Falls facilities and began operation in 1980. They include the Cabot Station, spillway and gatehouse fishways. The fishways were designed to permit passage of upstream migrating fish around Turners Falls Dam.

The Cabot Station fishway has 66 Ice Harbor-type overflow weirs that have 10-foot-wide by 16-foot-long pools, each pool 1 foot higher than the previous pool. The entrance to the fish ladder is at the north end of the station. Shad exiting the ladder enter the power canal.

The gatehouse ladder is a vertical slot type, with seven 16-foot-wide by 17.2-foot-long pools each with two 1.75-foot vertical slots for shad to pass into the next pool. A public viewing center and a counting window are located at the end of the fishway before shad exit into the impoundment above the dam.

The Cabot units were nearing the end of their useful life when they were upgraded beginning in mid-2001, completing two units per year. The upgrades improved reliability and increased station capacity and annual output by 17% with no increase in hydraulic capacity.

When Massachusetts instituted mandatory deregulation in 1998, Northeast Utilities was forced to sell its generation assets. Cabot was first purchased by an NU affiliate, Northeast Generation Co. in 2000; then sold to Energy Capital Partners (ECP) in 2006. ECP’s wholly owned subsidiary, FirstLight Hydro Generating Co. (FirstLight), included Cabot Station and a dozen other hydro facilities. FirstLight was sold in 2008 to GDF Suez North America and then again in June 2016 to Canada’s Public Sector Pension Investment Board. FirstLight is currently operated by H2O Power LP, based out of Ontario, Canada.