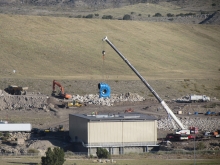 The Southeastern Colorado Water Conservancy District announces that its 7.5-MW James W. Broderick Hydroelectric Power Facility at Pueblo Reservoir began operations the last week of May, after testing and commissioning were completed.

The plant will produce electricity by harnessing flows that pass through the north outlet of the dam into the Arkansas River. The district signed a Lease of Power Privilege with the U.S. Department of Interior’s Bureau of Reclamation in August 2017 and began construction shortly afterward. Reclamation approved full operations last week.

Mountain States Hydro LLC of Sunnyside, Wash., was the general contractor for the design-build project, which was financed through a $17.2 million low-interest loan from the Colorado Water Conservation Board and the district’s Enterprise program.

“This is an important step for the district,” said Southeastern’s Executive Director Jim Broderick. “We envision this as a long-term revenue source for Enterprise programs, such as the Arkansas Valley Conduit. Equally important will be the new source of clean power we have created.”

The project was formerly called Pueblo Dam, and the district board voted to name it for Broderick in April 2019. The plant was constructed on a dedicated connection to the North Outlet Works, which was constructed by Colorado Springs Utilities as part of the Southern Delivery System. Three turbines and two generators can be used individually or in tandem to take advantage of releases from Pueblo Dam ranging from 35 to 810 cubic feet per second. The plant will generate 28 million kWh of electricity annually.

The genesis of the project came in 2011, when Reclamation published a notice of intent to develop environmentally sustainable hydropower at Pueblo Dam. Southeastern, Pueblo Water and Colorado Springs Utilities partnered in the application for the LOPP. Southeastern remained as the sole signer of the lease in 2017, after working on a preliminary design with Mountain States. Colorado Springs Utilities is working with Southeastern to provide technical assistance and power scheduling both during startup and operations.

Power from Pueblo Dam Hydro will be sold to the city of Fountain, and to Fort Carson, through a separate agreement with Colorado Springs Utilities for the first 10 years of generation. For the next 20 years, Fountain will purchase all of the power generated by the plant.

“We are proud to assist Fort Carson with its renewable energy initiatives, collaborate with the City of Fountain and strengthen our ties to the Southeastern Colorado Water Conservancy District,” said Colorado Springs Utilities General Manager John Romero. “This project further leverages the investments that citizens of the region have made in both the Fryingpan-Arkansas Project and the Southern Delivery System.”