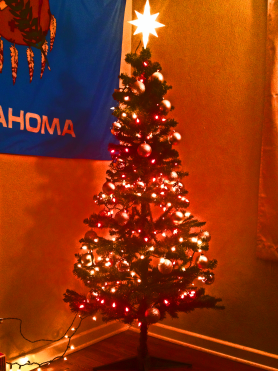 I’m not sure that it’s a tangible or improvable skill like, say, playing the piano (which I was at one time relatively good at) or hacking divots into the golf course (which might be why I’ve never been asked to participate in the annual HydroVision International tournament), but I am bad — woefully so, in fact — at Christmas.

I’m told there’s an art to wrapping gifts. I don’t have it. My presents are easily identifiable as the ones with sloppy creases and ribbons tied in knots I learned in Cub Scouts instead of from watching Martha Stewart.

Meanwhile, my artificial tree is envious of Charlie Brown’s droopy sapling — and to further demonstrate my Christmas ineptitude, I strung it with orange lights as an homage to my alma mater, Oklahoma State. You know. Because that makes sense, right?

It seemed like a good idea until I fell asleep on the couch one night, only to hit my head on the coffee table when I rolled off it in a panic-induced stupor thinking the orange glow were flames consuming my apartment instead of the Christmas tree standing innocently in the corner.

I’m not even good at deciding what I want for Christmas, and aside from the US$2 million two-person submarine I saw in the SkyMall catalog during my most recent flight, I’m mostly just hoping I’ve been good enough for Santa Claus to bring me a new vacuum cleaner and some dress socks.

I thought it might befit the season, however, if I were to make a holiday wish list for the hydropower industry as the editor of HydroWorld.com and not as a 30-year old who still secretly wants Legos and G.I. Joe action figures.

So, without further ado, here are the five things I’d wish for if I could have anything for the hydroelectric world:

1)  I wish that Brazil can make significant strides in the development of its hydropower sector, particularly with regard to a number of the larger projects that have been plagued by delays and controversy. Though the importance of hydroelectricity as an energy commodity has never been more prominent — particularly as the country sprints to prepare for the upcoming FIFA World Cup and 2014 Olympic Games — projects like the 11.2-GW Belo Monte and 1.8-GW Teles Pires have been halted numerous times through the past year alone.

2)  I wish that the United States Congress continues to make hydropower a priority in the following year. Two bills signed off by President Obama in August are indeed a good start, and additional legislation currently moving through the Senate would only add to what has already been enacted. The fact that hydropower has been included in two recent national renewable portfolio standard proposals is also a victory for the industry, but as often seems to be the case, there is still more work to be done.

3)  I wish for more multinational hydropower investments in emerging and recovering markets. With the World Bank announcing its renewed support for large hydroelectric projects earlier this year and other financial institutions following suit, it’s fantastic to see lenders proactively choosing to invest in hydropower for both its energy production and ancillary benefits. This is especially true for many of the African and Asian projects we’ve covered this past year where irrigation and flood control are as significant considerations as electricity. Small hydropower hasn’t been left out either, given that localized projects are helping provide electricity in areas where grids might not otherwise be able to reach.

4)  I wish for even more advances in the marine and hydrokinetics sector. The MHK market might still be a bit alien to hydropower traditionalists, but with significant research being done around the globe, wave energy and tidal power aren’t going anywhere. And though development is still an emphasis, the real race now seems to be toward full-scale commercial production.

5)  I wish for more news out of Canada. While writing the cover story for the December 2013 issue of Hydro Review magazine, it became apparent to me that I could do a better job of finding more day-to-day news from our northern neighbors. And like Ralphie Parker dropping hints for an official Red Ryder, carbine-action, two-hundred shot range model air rifle, this is where I leave my email address and encourage those of you doing work in Canada to let us know what you’re up to.

I think this is the point in virtually every Christmas movie where a doe-eyed child emerges from a crowd of cynical non-Santa believers and tells them if they all hope really hard that their wish will come true.

So, perhaps if we all wish together, the industry will get some of what it wants this holiday season.

And as for me, I think I’ve changed my mind. Skip the submarine and give me an Oklahoma State victory over Hydro Review sales director Howard Lutzk’s Missouri Tigers in the Cotton Bowl instead.

Happy holidays from all of us here at HydroWorld.com, Hydro Review and HRW-Hydro Review Worldwide magazines.