The relation between measured fish swim paths and flow field information can be represented by probability distributions. These distributions, together with a particle tracking algorithm, can be used to predict fish behavior under various flow conditions not only at the site where swim paths were measured but also at other locations.

Downstream migration of juvenile salmon can be hindered by dams, which create pools that alter hydrodynamic cues and expose fish to potentially higher predation risk and longer migration time. A model, based on actual fish movements, that predicts juvenile salmon swimming patterns in the forebay of a dam could be used to estimate residence times, migration route selection, and bypass efficiencies, as well as evaluate the benefits of options intended to enhance downstream migration.

Juvenile salmon swimming in the forebay of a dam that impounds water for hydropower can pass through the spillway or turbine units. Many dam owners have built structures intended to provide a fish passage route that ideally presents less deleterious conditions and thus enhances downstream migration (i.e., surface collector). The efficacy of these structures is usually evaluated using hydroacoustic and radiotelemetry studies.1,2,3,4

The combined analysis of measured swim paths and flow field information can assist in determining hydrodynamic conditions favorable to downstream migration. Several studies have linked fish behavior and hydrodynamics,1,3,4 focusing on juvenile salmon movements on the near field (~20 m) of possible downstream routes (e.g., turbine intakes and surface bypasses). These studies do not provide all the information needed to develop an individual-based model that simulates juvenile salmon swimming patterns in the forebay of a dam. 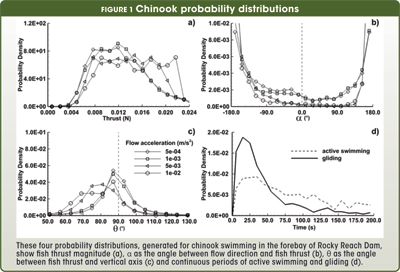 This article presents the use of a numerical model that simulates juvenile salmon swimming behavior. Model parameters were obtained by analyzing swim paths (measured using acoustic tags) together with computational fluid dynamics (CFD) results. Fish positions were tracked through the study area using a three-dimensional acoustic tracking array. Swim paths for chinook were measured at Rocky Reach Dam and for sockeye and steelhead at Priest Rapids Dam. Numerical simulations predicting fish behavior focused on Priest Rapids. Chinook measured data were available at both dams but only swim paths measured at Rocky Reach were used to configure the model to test the concept of transferability of fish behavior between dams.

By solving Newton’s second law at every measured location, fish thrust magnitude and direction were obtained. Fish velocity and acceleration were calculated from the measured paths. Flow field information at every measured location was obtained from CFD simulations. These results were used to develop probability distributions that represent juvenile salmon swimming behavior given flow conditions. Probability distributions were implemented in a particle tracking algorithm that, in conjunction with flow field information from CFD simulations, was used to predict juvenile salmon swimming behavior in the forebay of Priest Rapids. 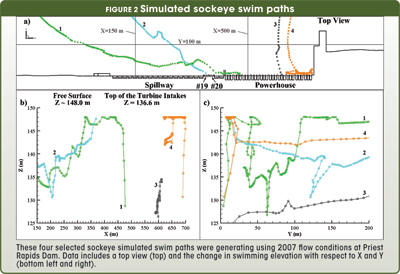 Priest Rapids on the Columbia River in Washington is owned by Public Utility District No. 2 of Grant County. It has a 10-unit powerhouse and 22 spillway bays. For the simulated years, spillways 19 and 20 operated as top-spill. The model extends about 5,000 m upstream of the dam and includes Goose Island.

At Rocky Reach, the main axes of the spillway and powerhouse are nearly perpendicular. The dam has 12 spillway gates and 11 generating units. At the downstream end of the powerhouse, there is a surface collector to capture downstream migrants.

The length and mass of chinook ranged from 0.14 to 0.22 m and from 0.03 to 0.1 kg, respectively. Length and mass for sockeye and steelhead was not available, so 0.15 m and 0.04 kg were assumed. This assumption of constant length and mass is likely to affect the results of the model. The impact can be quantified by repeating the methodology presented in this article using measured swim paths with individual length and mass available.

Three CFD simulations were used to correlate measured swim paths and hydrodynamics: results for Rocky Reach in 2005 (chinook) and Priest Rapids in 2007 and 2008 (sockeye and steelhead). The 2007 simulation was used to test the model’s predictive capabilities. Spillway and turbine discharges were obtained by averaging several consecutive days with nearly steady-state conditions.

The conditions at Rocky Reach were determined by averaging plant operations from May 19 to 23, 2005. The surface collector draws about 161 m3/sec, which represents 5% of the river flow. About 96% of that flow is pumped back to the forebay. For the simulated days, spillway flow represents 20% of the river flow.

CFD code ANSYS FLUENT was used to obtain the flow field. Reynolds-Averaged Navier Stokes equations were solved using a finite volume method. Pressure and velocity were coupled using the SIMPLE algorithm. Turbulence closure was achieved with the k- model. Meshes were generated using GRIDGEN 15.15. Simulations for both dams were run on grids with 3.5×106 and 1.0×106 nodes.

An analysis of forces at every measured location was carried out to determine the fish thrust and ultimately probability distributions that represent fish swimming behavior.8 Newton’s second law on fish is:

The flow field from CFD simulations was interpolated at every fish location, and Equation 1 was solved in a Lagrangian reference frame to determine FT.

Figure 1 on page 40 shows distributions for all measured chinook locations. The distributions for fish thrust, , and show results for fish actively swimming. A value of 0 degrees for represents fish swimming in the same direction as flow, and 180 degrees or -180 degrees indicate fish swimming against flow. The angle between the vertical axis and fish thrust direction is . Fish swimming upwards and downwards are represented by <90 and >90, respectively. Periods of continuous active swimming and gliding are shown in the bottom right frame of Figure 1. As flow acceleration increases, chinook tend to swim tail-first and show a preference to swim upwards.

The second stage assumes that the movement of fish is subject to fundamental physical forces. Changes in velocity and direction are accomplished by solving Newton’s second law. This approach avoids simulated fish movements beyond fish swimming capacities as it is possible in a model that directly modifies fish velocity.

Research on horizontal and vertical spatial distributions as they approach dams8 indicates juvenile salmon tend to locate themselves around the river thalweg in the horizontal direction. And they tend to occupy the first 15 m of the water column. Juvenile salmon roughly follow the bulk of the flow upstream of dams.2,3 This article assumes that an initial particle distribution proportional to the total river flow roughly complies with the above findings. The particle initial distribution was obtained with the 2007 flow conditions at Priest Rapids. Three thousand particles were injected about 2,000 m upstream of the dam. The same distribution was used for the species simulated.

Figure 2 on page 40 displays four sockeye swim paths predicted with the model, using 2007 flow conditions at Priest Rapids. Fish 1 and 2 approached the dam swimming close to the right bank (looking downstream). Fish 1 swam in front of top-spill bays 19 and 20 and passed downstream through Unit 2. Fish 1 was overpowered by the downwards flow from the unit. The exit route for Fish 2 was bay 19. Fish 3 and 4 approached swimming close to the left bank and passed through the powerhouse. At about 100 m upstream of the dam, Fish 3 swam at a depth of 18 m, continued approaching at a slightly downwards trajectory and passed through Unit 7. Fish 4 exhibited milling behavior close to the free surface and in proximity to Units 10 and 9 and passed through Unit 10. Travel times from the injection plane until the final migration route were 3.6, 2.8, 2.1, and 2.4 hours for Fish 1, 2, 3, and 4, respectively. 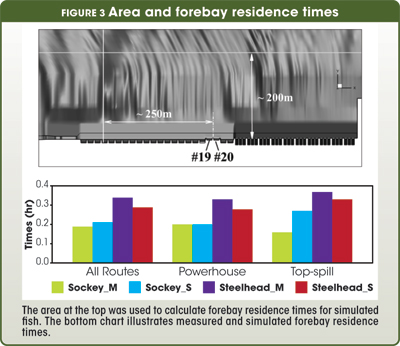 Results for sockeye have an average relative error of about 26%. The biggest discrepancy is found for simulated fish that passed through the top-spill. For simulated fish that selected the powerhouse, results are the closest to the measured values. For steelhead, the numerical model tends to underpredict forebay residence times. The average relative error for steelhead is about 13%. For this species, residence times calculated with the simulated swim paths are consistently shorter than the measured times. The model captures the tendency in steelhead to spend more time than sockeye in the forebay of Priest Rapids before passing downstream.

The percent of tagged fish passing downstream of Priest Rapids in 2007 is reported10 for the three species and discriminated by migration route. Simulated swim paths were also used to calculate passages through the bypass and powerhouse. Passages calculated with passive particles without any behavioral rule were also computed. Figure 4 shows passages for passive particles, chinook, sockeye and steelhead. Model predictions for the three species are closer to the measured values than results calculated using passive particles. Passages calculated with simulated and measured swim paths show the same trends, with steelhead and sockeye having the highest and lowest passages through the bypass, respectively. However, numerical results consistently underpredict passages through the bypass, with this being more apparent for steelhead. 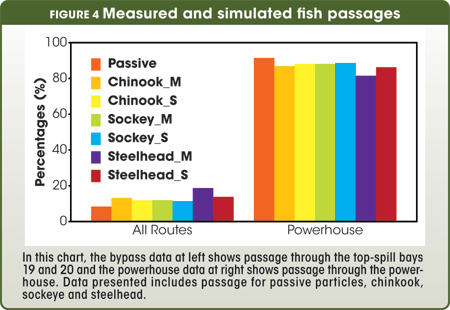 Relative errors between passages estimated with the measured and simulated swim paths were:

On average, passages through the bypass calculated with the model have a relative error of -12.4%. Results for sockeye and steelhead show the smallest and highest errors, respectively.

Based on average values of swim thrust magnitude and orientation, the zone where fish are likely to be overpowered by turbine flow is roughly located below a depth of 10 m and extends about 20 m upstream of the turbine draft tubes. Results for tagged and simulated fish presented in Figure 4 report fish final exit, including volitional and non-volitional passage.

The model with fish behavior performs better than the assumption of passive behavior and predicts differences between steelhead and sockeye residence times. Model configuration for chinook used swim paths measured at Rocky Reach. The good agreement between final exit predictions for chinook at Priest Rapids could indicate that the individual-based model can be used to transfer fish behavior from one dam to another. Furthermore, it suggests the existence of universal relations between fish behavior and hydrodynamics that could be used to design fish bypass structures and to assess the impact of different flow conditions on fish attraction.

Discrepancies between measured and simulated forebay residence times are, on average, within 20%, with the biggest error found for sockeye passing downstream through the bypass. The model underestimates the time steelhead swim in the forebay of Priest Rapids before passing downstream. However, model predictions show that steelhead spend more time swimming in the forebay than sockeye, as was calculated with the measured swim paths.

Flow conditions for the CFD simulations were obtained from averaging consecutive days with nearly steady plant operation. Minor changes in turbine operation could alter the flow field near the draft tubes. Therefore, using hourly plant operation can yield a more accurate representation of the hydrodynamic conditions.

The model assumes simulated fish select swimming variables based on current flow conditions. A possible modification can be to develop probability distributions that encapsulate behavior given current and past flow and swimming conditions.

Antonio Arenas Amado, PhD, is an assistant research scientist, Marcela Politano, PhD, is an associate research engineer, Larry Weber, PhD, P.E., is director and Santiago Lopez is an M.Sc. student with IIHR Hydroscience & Engineering at The University of Iowa. Mark Timko is a senior fishery biologist with Blue Leaf Environmental.