Cameron Ironside is programme director for the International Hydropower Association.

Development of the significant amount of hydropower potential available worldwide, particularly in countries where large resources remain untapped, may be sufficient to satisfy a sizeable portion of growing electricity needs while also presenting an opportunity to boost economies and human wellâ€being.

Many decision makers, particularly in the developing world, are assessing their countries’ hydropower potential and the contribution these projects can make, particularly with regard to climate change mitigation and adaptation. There is a growing appreciation by governments of the benefits of developing hydropower projects in a sustainable manner.

Equally, for some time the hydropower sector has required a comprehensive, globally applicable tool to assess and demonstrate the sustainability of hydro projects – a point that was highlighted by the Final Report of the World Commission on Dams, released in 2000.1 Today, large infrastructure projects such as these are, understandably, expected to undergo rigorous impact assessments to evaluate, for example, any social or environmental concerns that may need to be addressed or mitigated as part of the project implementation. But, until now, the hydropower industry has lacked a tool that brings together the many varied aspects of these assessments.

In 2008, the International Hydropower Association (IHA) began working with representatives from several organizations to define a sustainability assessment tool that would meet this need. These organizations consisted of:

– Social and environmental non-governmental groups, such as Oxfam, The Nature Conservancy, Transparency International and WWF;

– Governments, including China, Germany (observer), Iceland, Norway and Zambia; and

– Commercial and development banks, such as those that are signatory to the Equator Principles (a credit risk management framework for determining, assessing and managing environmental and social risk in project finance transactions) and the World Bank (observer).

IHA was formed in 1995 under the auspices of UNESCO and addresses the role of hydropower in meeting the world’s growing water and energy needs as a clean, renewable and sustainable technology. The non-governmental association has members active in more than 80 countries.

As part of the process of developing this protocol, field trials were conducted in 16 countries, across six continents, engaging 1,933 individual stakeholders in 28 countries. The primary objectives of these trials were to validate the forum’s work so far, by providing feedback on how well the Draft Protocol was measuring sustainability, as well as to inform the final revision. Trials were conducted by hydro project developers, owners and operators.

The forum incorporated the expertise of partners in China and Zambia with regard to working with communities affected by hydropower project development, and consulted with affected communities during both of the two development phases of the protocol and worked with them during trialling of the draft protocol. These efforts, and the learning developed through them, strongly influenced the final version of the protocol, which was launched in June 2011 in Iguassu, Brazil.

“For years, the environmental community has been looking for industry leadership to raise the environmental performance of hydro projects and to avoid bad projects altogether. Industry awareness is certainly increasing, but there is still an urgent need for practical tools in the field,” said Dr. Joerg Hartmann, Water Security Leader, WWF. “Working with IHA on the protocol has already proven to be a very effective way for WWF to reach a broad group of utilities, investors and regulators.” WWF is one of the world’s largest conservation organizations, and Hartmann was a key member of the Hydropower Sustainability Assessment Forum.

The protocol enables the proponent of a hydropower project to obtain a calibrated assessment of numerous relevant sustainability topics. A project’s sustainability profile is produced using these assessment tools as a framework. Using this framework, multiple stakeholders are able to become better-informed on the sustainability profile of a specific project using a common language, and so develop strategies to address any weaknesses. Commissioning an assessment, to be performed by an independent, accredited assessor, does not automatically enable a developer to claim that a project is sustainable, but it provides the pointers a developer may need to improve sustainability through all stages, from planning to operation.

“For the first time, the issues of governance, transparency, integrity and accountability were addressed in the Hydropower Sustainability Assessment Protocol. This will significantly facilitate the sustainability of the planning, design, implementation and operation of hydroelectric projects.” said O`Leary, Transparency International’s representative on the Water Integrity Network International Steering Committee. The Water Integrity Network was formed to support anti-corruption activities in the water sector worldwide.

The Hydropower Sustainability Assess-ment Protocol, now available as a tool to inform dialogue and policy, represents a significant advancement toward achieving sustainability in the hydropower sector. It offers a consistent, globally-applicable method of assessing performance in about 20 (depending on the stage being assessed) vital topics related to the sustainability of hydropower facilities. These topics cover the three principle pillars of sustainability – social, economic and environmental – and include issues such as downstream flow regimes, indigenous peoples, biodiversity, infrastructure safety, resettlement, water quality and economic viability (see Table 1, above).

This new approach to promote continuous improvement in hydropower sustainability has been designed so that sustainability can be assessed anywhere in the world, covering a broad range of possible case scenarios. This makes it a potentially valuable tool for investors and other financial institutions operating across diverse geographies.

The protocol can be used during all stages of hydropower project development: early stage, preparation, implementation and operation. Thus, the impacts of a project already in development or operation will be better understood, allowing for any necessary improvements or mitigation measures. It also allows for new projects, still at the planning stage, to be better evaluated and designed before construction begins.

IHA is in the process of accrediting assessors who will be qualified to undertake credible and objective assessments. The results of an official assessment may by published online or in print if such an accredited assessor has been used.

The ability to rapidly interpret and transparently communicate the results of an assessment of a project, based on documented evidence and objective analysis, is key to ensuring that the protocol is useful to a wide variety of stakeholders. To facilitate this, the results will be presented using a standardized structure and diagram that resembles a spider diagram, detailing where, on the scale of 1 to 5, an assessment topic result lies.

A clear profile of sustainability

The assessment tools form a framework used to produce an informative project sustainability profile. While this profile is not itself an accreditation of hydropower sustainability, it can be useful in raising awareness of a project’s weaker aspects. The protocol is a complementary tool and so its application strengthens and supports sustainability tools and standards that already exist. 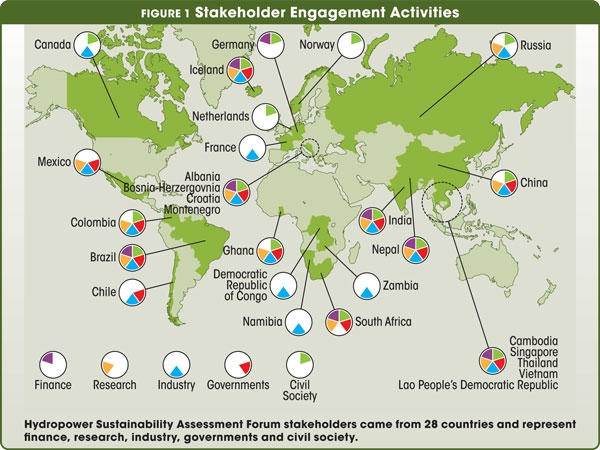 The Governance Committee’s authority extends to approving any changes to the protocol, ensuring that assessments constitute appropriate applications of the protocol, developing training materials, accrediting assessors and completing any revisions to the terms and conditions. Governance Committee members will be elected from issue-specific expert groups referred to as “chambers,” representing environment or conservation organizations; social impacts, project-affected communities, and indigenous peoples’ organizations; financial institutions; developing and developed country governments; and industry. In a direct effort to foster inclusiveness, the Governance Committee welcomes and encourages input from, and engagement with, all stakeholders involved in the development of hydropower. Figure 1, above, shows the countries and types of stakeholders involved in development of the protocol.

This positive response from the hydropower industry demonstrates the wide interest in applying the protocol among organizations keen to promote continuous improvement of hydropower sustainability performance.

“Sustainability Partners are leading the way in taking this opportunity to apply the protocol, a significant step in advancing hydropower ever more sustainably,” said Abdel-Malek.

IHA also announces the Hydro4LIFE project that will form the basis for Sustainability Partners whose projects that are situated within the EU will be assessed using the Hydropower Sustainability Assessment Protocol. Hydro4LIFE is a European Commission-funded project to assist the implementation of the Hydropower Sustainability Assessment Protocol in the EU. The project is 50% co-funded by the European Commission’s Life+ Environment Policy and Governance program and 50% by IHA, with a total budget of €1.2 million (US$1.7 million). It is coordinated by IHA and is running from September 1, 2010, to September 1, 2013.

More on the Hydropower Sustainability Assessment Protocol, including downloadable copies, can be accessed by visiting: www.hydrosustainability.org.

Energy is vital for economic growth and stability, and it directly affects the prices of goods and services that its presence makes possible. There are major benefits from hydropower at the local, regional and global levels, as a source of clean, renewable, low-carbon energy. Although energy provision is not specifically a UN Millennium Development Goal, it nonetheless underwrites a number of these goals. Achieving these goals will be difficult without the development of more electricity resources and in particular the expansion of rural electrification. Hydropower will continue to play a fundamental role in addressing both energy and water needs worldwide.