More
Home Dams and Civil Structures Dam Design and Construction A US$1.8 million river bank stabilization in Folsom, Calif., is part of... 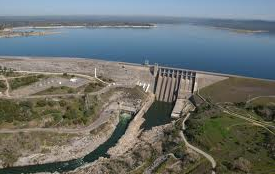 In a press release from the U.S. Army Corps of Engineers (Corps), the organization’s Sacramento District awarded a US$1.8 million contract to Newland Entities Inc. of Marysville, Calif., to stabilize 400 feet of the American River’s right bank using 32-foot-long rock bolts.

The Corps’ Sacramento District has been overseeing construction of an auxiliary spillway at 198.72-MW Folsom hydroelectric project to address hydrologic risk identified by the Bureau of Reclamation’s Safety of Dams program. Construction began in May 2012 on the US$900 million Joint Federal Project of the Corps, the Bureau of Reclamation, California Department of Water Resources, and Sacramento Area Flood Control Agency.

The dam’s spillway, according to the release, would allow the Bureau of Reclamation to do two things: make more controlled water releases, compared to its current ability, from Folsom Dam and secondly, during large storms release water sooner in the process in its management process.

The stabilization project is expected to begin in June and end by December, weather-dependent.

According to the release, storm releases from Folsom Dam’s auxiliary spillway enter the American River with increasing forces and high angles, even after passing a series of engineered water-slowing features. 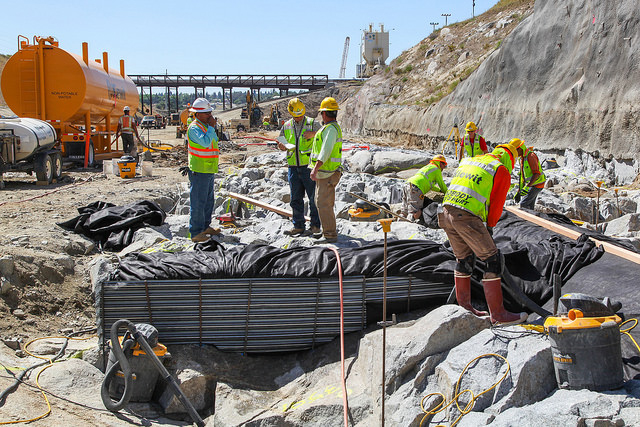 (U.S. Army photo by Todd Plain/Released)
Contractors for the Sacramento District prepare for concrete placements at the Folsom Dam auxiliary spillway project’s upper chute April 29, in Folsom, Calif. Preparations include survey work, surface cleaning and installing groundwater drainage systems (underneath black fabric on right) prior to nighttime placements. The U.S. Army Corps of Engineers Sacramento District, together with the U.S. Bureau of Reclamation and state and local partners, is building the spillway to reduce flood risk throughout the Sacramento region.

The combined flows could destabilize part of the riverbank making it vulnerable to erosion.

“Crews will use a highline system to lower themselves and their wagon drills down to the project area — it’s going to be a tough job.”

To deal with site challenges crews will use ropes, climbing harnesses and platforms to hang above the river and drill as many as 48 rock bolts into the bank, while also reinforcing some areas with concrete to further stabilize the slopes — all while keeping drill cuttings and fluids from entering the water.

Folsom Dam is a 340 ft high and 1,400 ft long concrete gravity dam on the American River in Northern California, about 25 mi northeast of Sacramento. The dam, flanked by earthen wing dams, originally opened 1956.

The Corps-built hydroelectric project was transferred to the Bureau of Reclamation upon its completion.

The dam and its catchment area, Folsom Lake, are part of the Central Valley Project, which is a multipurpose project providing flood control, hydroelectricity, and irrigation and municipal water supply.