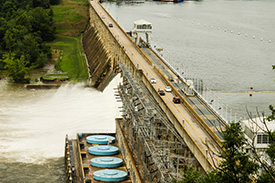 Ameren Missouri announces a major construction project will begin at Bagnell Dam and its associated Osage Energy Center this spring, to install a series of new anchors and concrete on the downstream side of the dam.

This work is anticipated to cost $52 million and take about 18 months.

The 242.59-MW Osage Energy Center, on the Osage River, has operated for 85 years. The last major structural upgrade at Bagnell Dam was completed in the early 1980s with the installation of 277 post-tensioned anchors to hold the dam into the bedrock, Ameren Missouri reports.

This latest upgrade will be conducted in three parts: installing 68 new post-tensioned anchors to hold the dam to the underlying bedrock, placing concrete between the highway piers to add weight to the dam, and installing a new concrete overlay to replace work and cracked concrete on the east and west sections. In total more than 66 million pounds of new concrete will be added, Witt says.

The work “will have no effect on the energy generating capacity of Osage Energy Center,” according to a press release.

Ameren Missouri has a total generating capacity of 10,200 MW from 10 “energy centers.” The company has three hydroelectric energy centers: Osage, 142-MW Keokuk on the Mississippi River in Iowa and 442.5-MW Taum Sauk pumped storage in Missouri.