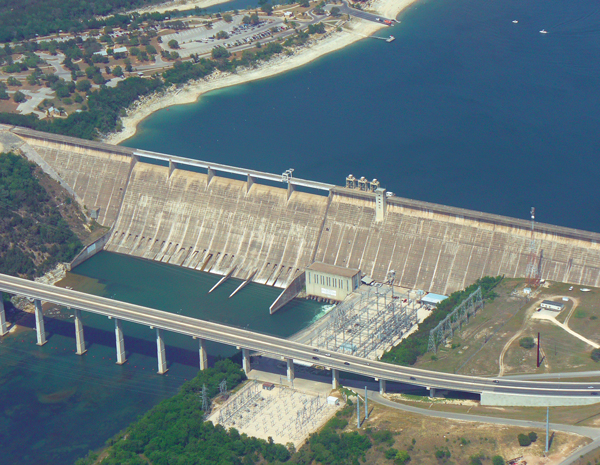 Things in Texas sometimes are bigger by comparison, and Mansfield Dam is no exception. Assessing its foundational stability is paramount because Mansfield is the tallest dam in Texas at 278 feet and is classified as high hazard by the Texas Commission on Environmental Quality.

According to the National Dam Safety Review Board, the Federal Emergency Management Agency and federal agencies that build and manage dams, “high hazard potential” applies to any dam, should the dam fail, where human life is at risk.

To determine Mansfield Dam’s geotechnical foundational stability status, engineers needed to investigate the assumption that the original foundation drains significantly reduce uplift along the base. The investigation employed several field and laboratory tests to reach an engineering conclusion on the dam’s safety level.

Mansfield Dam is on the Colorado River about 13 miles from Austin, Texas, and consists of a 278â€ftâ€tall concrete gravity section flanked by a zoned earthfill wing dam up to 100 ft tall. The dam impounds Lake Travis, a major water supply and recreational reservoir. The dam also serves as the only flood control structure for the Lower Colorado River Basin. A powerhouse next to the dam provides electricity via three turbine-generator units with a capacity of 108 MW.

The dam was designed by the U.S. Department of Interior’s Bureau of Reclamation and was constructed by the Lower Colorado River Authority (LCRA) and Reclamation between 1937 and 1941. Reclamation was prominently involved in operation and maintenance of Mansfield Dam until 1997, when LCRA assumed full ownership. The dam was initially called Marshall Ford Dam.

The original design incorporated two grout curtains and two lines of foundation drains. Sixtyâ€two uplift monitoring stations were installed as part of construction. Subsequent reviews of the dam’s performance by Freese and Nichols under contract with LCRA and comparisons to stateâ€ofâ€practice design criteria revealed concerns that data from the uplift monitoring stations were not reliable. Several uplift monitoring points failed over the years due to corrosion. Stability analyses indicate effective foundation drains are critical to dam stability. As part of the current assessment performed by Freese and Nichols and Brierley Associates, siteâ€specific values for the foundation rock and concrete/rock interface were obtained and vibrating wire piezometers were installed below the base of the dam for revised stability analyses. The piezometers provided the ability to measure and record rapid responses to changes in pore pressure beneath the dam with fluctuating reservoir levels.

History of the dam

Initial construction began in 1937, but after a severe flood in July 1938, LCRA opted to redesign and raise the height of the dam 80 ft to add storage capacity. The dam was constructed in two stages, with Stage 1 referred to as low dam and Stage 2 as high dam.

The concrete section in the first proposed dam was 198 ft tall and was well on the way to completion when the foundation “platform” for construction of the subsequent upstream raised dam section was started (see Figure 1).

Galleries for grouting and drainage were constructed near the concrete/rock interface in each stage. The drainage galleries are located 12 ft and 73 ft downstream from the upstream face. A line of 25â€ftâ€deep holes at about 10â€ft centers was drilled at a 6â€degree angle upstream in each of these galleries and filled with grout to reduce foundation permeability. Foundation drains were drilled at a 6â€degree angle downstream from these galleries into the foundation. The foundation drains are 2 1/8 in diameter on 10â€ft centers and are typically 60 ft deep.

The original 62 monitoring stations were installed in six lines from upstream to downstream to monitor the uplift profile across the foundation (see Figure 1 on page 10). The uplift monitoring points were constructed by placing 2-in iron pipe vertically in concrete with the bottom of the pipe 6 in above the rock surface. After the concrete was placed, 1 3/8-in-diameter holes were drilled through the pipe and into the foundation rock. The steel pipe was then routed to the drainage gallery and fitted with pressure gages.

Reclamation directed Mansfield Dam inspection and maintenance until 1997, when LCRA assumed ownership. In 2006, a review was conducted of the dam and its performance and previous studies or analyses relative to current stateâ€ofâ€theâ€art design. Review found that many of the values used in previous stability analyses were based on typical published values rather than siteâ€specific data. Among the assumed values were the unit weight of concrete and the apparent cohesion and coefficient of internal friction of the foundation and dam/foundation interface.

In addition, dam stability was found to be sensitive to the uplift reduction assumed because of drain effectiveness. Previous stability analyses assumed a drain effectiveness of 67% because data from uplift monitoring stations suggested the drains were functioning properly and about 67% effective. However, the reliability and accuracy of the monitoring stations were questioned in several previous reports. The readings have considerable scatter and appear unrelated to lake levels. Many of the instruments show little change in reading even though the head fluctuates 90 ft over the period of record.

Figure 2 (on page 10) shows typical readings in the second dam stage, and Figure 3 (see page 14) shows typical readings in the first dam stage. The readings were further questioned as corrosion damage began to affect the exposed section of pipes, causing some of the monitoring points to stop working. The procedure for reading the instruments has varied several times in an attempt to collect reliable data.

Federal dam safety guidelines call for a reliable uplift data and regular drain maintenance program to justify 67% drains efficiency. Minimal drain maintenance has been performed at Mansfield Dam, involving only measuring drain depths several times and finding them to be nearly the same depth as they were at construction.

The comprehensive facility review found significant uncertainty in the dam’s previous stability analyses. Due to the lack of a drain maintenance program and the uncertainty surrounding the uplift monitoring data, 67% drain effectiveness was not justified. A sensitivity analysis of the dam stability found reductions in drain efficiencies, and unit weight of concrete or strength properties of the foundation would result in the dam not meeting required factors of safety for stability.

A risk assessment performed as part of the review suggested that action was required to further evaluate the risk.

The review team recommended drain effectiveness be investigated by installing modern piezometers to determine if the pressure gages were reporting correctly. It was also recommended that site-specific information be obtained on material properties and strengths such as unit weight, cohesion, and friction angle of the concrete and foundation rock.

The next step was cleaning the drains in a 50â€ft section to determine the effect on measured uplift pressures. The drain cleaning restored the drains to near original depth. Observed pressures in three of the 12 monitoring gages in this location were reduced, but they began rising again shortly after cleaning even though the lake level significantly dropped. The uplift readings were made with the original uplift gages, which have questionable accuracy. The results of the drain cleaning were inconclusive, and the data from the original gages were once again questioned.

In 2011, the primary purposes of the foundation investigation were to obtain material samples for testing and to install vibrating wire piezometers to verify the uplift monitoring station readings.

Twelve boreholes were drilled in the drainage galleries near the bottom of the dam. Due to limited access, a skid rigâ€boring machine was used. Power and water hoses were run hundreds of feet to reach the boring machine. Continuous core samples in the 40â€ to 75â€ftâ€deep boreholes were taken. Coring through the concrete averaged 30 minutes per ft while coring through the rock averaged 11 minutes per ft.

All of the borings penetrated the base of the dam and extended into the limestoneâ€bearing stratum. Vibrating wire piezometers were installed at the concrete/limestone interface in all the borings and at deeper depths in six of the borings.

Mansfield Dam is situated within a widespread outcrop zone of the Cretaceousâ€aged Glen Rose Formation. In the Austin area, the formation consists of about 700 ft of hard and soft limestone, dolomite and marl, which forms a distinctive, stairâ€step topography. The borings conducted for this investigation confirmed that the dam is supported directly on gray to tan limestone of the Glen Rose Formation.

In general, the foundation rock below the base of the dam consists of thin to thick beds of predominantly hard limestone with occasional softer argillaceous limestone seams and layers. Grout infilling of rock discontinuities from the initial construction activities was observed in a few of the borings drilled for this investigation.

Based on these findings and interpretations of the direct shear test results, a cohesion intercept of 72 psi and friction angle of 36 degrees was used in the base sliding stability analysis. Previous analyses had assumed cohesion intercepts of 74 to 123 psi and friction angles of 37 to 45 degrees. The testing results indicated that the previous analyses overestimated the foundation strength.

Eight tests to determine the unit weight of concrete were run. The results ranged from 140 to 149 pounds per cubic ft (pcf) with an average of 146 pcf. This resulted in a 3% reduction in the mass of the dam from previous analysis, equal to about 115,000 pounds at the maximum section.

As part of the foundation investigation, 18 vibrating wire piezometers were installed in the 12 boreholes. The instruments are automatically read by dataloggers four times each day. Figure 3 (see page 14) shows typical readings from two of the piezometers. The data indicate the uplift is directly related to lake level and data collected to date has much less scatter than the original uplift monitoring points. The piezometers generally indicate the upstream drain reduced uplift pressures to near tailwater and that the pressures were at tailwater by the downstream drain.

The stability of the dam was reevaluated, with the material properties based on the material testing. The uplift assumptions in the stability analysis used trends extrapolated from the second stage dam piezometers. A straightâ€line uplift was assumed from the lake level to the extrapolated upstream drain elevation and then straight line to tailwater. No reduction due to the second line of drains was assumed. The analysis found that the dam is stable against overturning and sliding using the uplift profiles developed from this study.

Key conclusions from this study include the following:

— Data from the geotechnical exploration and laboratoryâ€testing program reveal the dam is founded on a firm foundation with an appropriate concrete/rock contact at the base of the dam. No weak layers below the interface were identified.

— Construction joints were not observed in the concrete core, suggesting an intimate bond between concrete lift joints.

— Data from the new piezometers supports the assumption that the original foundation treatment and drains result in significant uplift reductions along the dam base.

— Stability analysis found the dam to be stable, with the uplift reduction provided by the foundation drains.