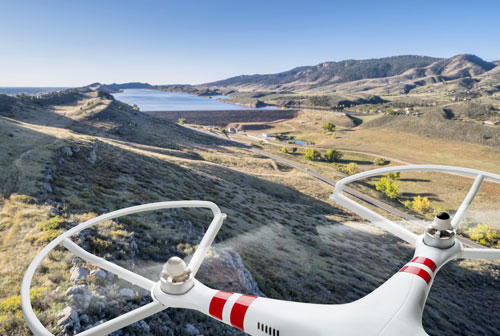 Modern technologies like drones, computer models and phone apps are offering opportunities for hydro project owners and operators to approach and complete work in a new way. This article offers information on how several of these technologies are being applied.

Admittedly, technology in the hydropower field doesn’t move nearly as quickly as it does in say the areas of computers or mobile phones. But, the good thing is that many of the advances made in technology for use in fields outside hydroelectricity can be applied in unique ways. And that means that everybody gains.

This article features some modern technologies and how they have been, or can be, applied at dams and hydro projects. Hopefully this information will spark some innovation on your part or provide a new way of looking at (and solving) a problem at your facility.

Dam safety will use unmanned aircraft in the immediate future

Unmanned aerial vehicles (UAV) or drones use technology easily identifiable to the general public. Two of the most recognized configurations are fixed- and rotary-wing aircraft. Not to be confused with armed, remotely operated unmanned fixed-wing aircraft, the rotary-wing UAV platform is emerging as an ideal technology for dam safety inspection.

With regard to either fixed- or rotary-wing, officially, the Federal Aviation Administration (FAA) uses the term unmanned aircraft systems (UAS).

Whatever your chosen term — UAV, UAS or drone — according to FAA, “introducing UAS into the nation’s airspace is challenging for both the FAA and aviation community, because the U.S. has the busiest, most complex airspace in the world. The FAA is taking an incremental approach to safe UAS integration.”

Rob Romocki, P.E., a former dam safety program manager who retired from the U.S. Army Corps of Engineers, shares the same view as FAA and many dam safety engineers; UAVs are an emerging technology well-suited for dam safety inspections.

Many private dam owners, dam safety inspectors and industry observers echo what Romocki told Hydro Review during the 2015 U.S. Society on Dams annual conference in Louisville, Ky. “The use of UAV for dam inspections is an emerging technology that needs to be pursued,” Romocki said. “It’s a matter of safety and cost effectiveness, and using these vehicles is a better choice on some occasions than using inspectors attached to a rope, rappelling down the face of a dam.”

To that end, the U.S. Congress has mandated FAA develop federal guidelines to use UAS. Congress also ordered FAA to integrate UAS into the national airspace, via official policy, by September 2015. In the meantime, FAA said it is partnering with several industry associations to promote safe and responsible use of UAS.

You can learn more about current guidelines by reading FAA’s “Know Before You Fly” literature.

Expanding the applications for CFD modeling

Computational fluid dynamics (CFD) modeling is not a “new” technology, but its uses for the hydroelectric power industry have been expanding over the past few years.

For example, Flow Science Inc. offers a CFD software called FLOW-3D that can be used to simulate free-surface flows for industrial and scientific applications. For the conventional hydropower industry, FLOW-3D has been used to:

— Evaluate flow distribution and vortex generation of a redesigned penstock intake;
— Model the tailrace below a hydropower project to determine the best location for a fish lift; and
— Develop the hydraulic design for a new development, including powerhouse intake, spillway structure, stilling basin and other regulating structures.

An interesting application of this technology has been to marine hydrokinetic energy. For example, FLOW-3D will be applied to tidal energy research, through Flow Science’s partnership with Minerva Dynamics in England.

And the company provides information on use of FLOW-3D to perform ocean waves resonance analysis of an oscillating wave column energy converter. The converter, the SDK Wave Turbine developed by Sendekia, was tested to determine a variety of factors related to the non-steady, irregular nature of wave energy and how that affected the device in terms of flow pattern, chamber design, energy dissipation, energy gathered, turbine design and wall thickness.

The advantages of using CFD for this particular application included model stability, a good interface (pre- and post-processor) and good calculation speed. In addition, disadvantages were seen, including measurement on baffles, post-processing calculations, and volume losses and wave reflection on boundaries.

Many other companies offer CFD software that has been used for modeling related to hydropower, including ANSYS’s Fluent v. 14.5 and STAR-CCM+ v8.

Although the Pacific Northwest National Laboratory’s “Sensor Fish” might lack scales and gills, the tool — now in its second generation — is helping researchers better understand the physical stresses imposed by hydroelectric equipment on their real counterparts.

PNNL’s newest Sensor Fish is roughly the size of a juvenile salmon, with a length of about 3.5 inches and a diameter of about 1 inch. Each unit is filled with a variety of sensors that provide data on pressure, acceleration, strain, turbulence, temperature and other forces experienced by fish as they travel through Kaplan and Francis turbines.

The Sensor Fish was created in large part due to an anticipated surge in the relicensing of many U.S. hydroelectric plants in coming years — a significant component of which is assessing how fish fare when migrating through powerhouses.

PNNL also expects the Sensor Fish to have a wide application amongst small hydropower developers, which are benefitting from and growing in number following strong federal support in recent years.

The newest generation of Sensor Fish has already been tested at Washington’s Ice Harbor and Boundary dams, with additional testing at an Australian irrigation structure, a dam on the Mekong River in Asia and three small hydro projects in the U.S. through the end of the year.

Sensor Fish are currently manufactured by hand at PNNL’s Bio-Acoustics & Flow Laboratory and cost $1,200 apiece. The lab said it hopes to transfer the technology to a manufacturer at some point in the future, making the Sensor Fish more widely available to operators and researchers.

Commercially available scanning sonar systems use technology the hydropower industry is adapting in its quest to maintain aging hydro-related infrastructure. In this case, data most needed from sonar includes: quality measures, collection efficiency and accuracy of geographic position.

According to the U.S. Army Corps of Engineers, its inspectors and engineers use a combination of sonar systems to overcome problems, accompanying hydraulic structural inspections in which the Corps uses divers or remotely operated vehicles.

The Corps cites using scanning sonar as one example that can help it conduct inspections that have greater accuracy because the technology has many inspection and survey applications for water resource projects.

The Corps is the largest public engineering organization in the U.S., and information it published indicates scanning sonar systems could collect survey grade bathymetry and three-dimensional (3D) point clouds of underwater features. Point cloud data can be used to develop 3D computer models or to compute estimates of lengths, areas or volumes.

Typical scanning sonar applications include inspections of scour, undercutting, concrete abrasion, exposed rebar, and accumulation of sediment around or debris on intakes.

In its report on the need to research improvements in sonar technology, the Corps said it is necessary to develop deployment techniques for inspecting features unique to large hydraulic structures, such as embankment and concrete dams.

When Apple introduced its App Store in July 2008, it did so with the promise that “there’s an app for that.” Nearly seven years and more than 1.4 million listed apps later, the App Store does indeed offer something for everyone — including hydropower project owners and operators.

Many technology and equipment companies are using their apps for both Apple iOS and Google Android devices to replace functions that once required dedicated meters or computers, giving users the ability to instantaneously access information from the palms of their hands.

For some parts manufacturers like Trelleborg Sealing Solutions, apps give members of the hydro industry the ability to do their jobs quicker, and without being constrained to their desks.

“We are always looking for ways to make our customers’ lives easier, and with the workforce becoming more mobile every day, we need to provide tools that can be used on the go,” Trelleborg project manager Wolfgang Heinrich said of the company’s ISO Fits and Tolerances, O-Ring Calculator and Unit Hardness Convertor apps.

Meanwhile, technology developers like In-Situ Inc. are using apps to augment their own equipment, eliminating the need for proprietary devices for data collection. For instance, In-Situ offers packages that include either its smarTROLL Rugged Dissolved Oxygen or Multiparameter sensors, which rely on mobile applications to display data to users.

The advantages, In-Situ said, are that the apps require no training and reduce costs for operators, while also adding additional features like GPS and photo tagging using mobile device capabilities.

Utilities and other project owners are also getting in on the act, with plant operators like the Tennessee Valley Authority turning to apps as a means of better communicating with the public. By installing TVA’s Lake Info App, users can check lake elevations, water release schedules, operating guides, navigation lock information and more.

An orthophoto (or ortho-rectified photo) is an aerial photograph that is geometrically corrected for topographic relief, lens distortion, and camera tilt. Seattle City Light has used low-elevation orthophotography to track large woody debris movement in the South Fork Tolt River. The utility has a 15-MW project on this river, which provides spawning area for chinook salmon and winter steelhead, both listed as threatened under the Endangered Species Act.

Seattle City Light placed large woody debris in the river to create log jams, with the goals of improving access of fish and other organisms to historic side channels in the river, recruiting and capturing gravel from existing deposits, bolstering decaying jams, and increasing the distribution of salmon spawning.

Monitoring was needed to provide data on the effectiveness of this work.

To capture images, the utility used an aerial mapping camera attached to a fixed wing plane. The camera features a 6-inch focal length lens and is gyroscopically stabilized and equipped with forward motion compensation. The photo scale was 1 inch equals 350 feet. Previously, aerial photographs available to Seattle City Light had a scale of 1 inch equals 1,600 to 2,000 feet. The choice of scale was a balance between the goals of the photography, cost (the finer the scale, the more photos and flight lines required), and limitations due to topography (steep forested terrain limits how close a plane can fly to the ground).

The utility hired Aero-Metric Inc. to fly the area when the leaves were off the trees, river flows were at their lowest during the time period, and conditions were overcast (to reduce glare). The digital images, produced at 0.25′ pixel (rather than the typical 1′ pixel scale) to maintain clarity when zooming in, were orthorectified and incorporated into the company’s geographic information system (GIS).