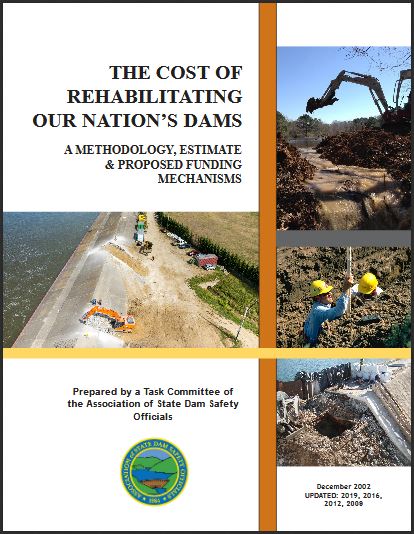 The cost of rehabilitating federal and non-federal dams in the U.S. has risen to more than $70 billion, according to a 2019 update of a report from the Association of State Dam Safety Officials (ASDSO). The cost to rehabilitate those dams where the risk is highest exceeds $23 billion.

Using the information in the 2018 National Inventory of Dams (NID), ASDSO estimated the cost of rehabilitating the country’s more than 90,000 dams. In 2003, ASDSO published its original cost estimates in a report entitled, The Cost of Rehabilitating Our Nation’s Dams: A Methodology, Estimate and Proposed Funding Mechanisms. The report was updated in 2009, 2012, 2016 and 2019.

Occasional upgrade or rehabilitation is necessary due to deterioration, changing technical standards, improved techniques, better understanding of the area’s precipitation conditions, and changes in downstream populations or land use, ASDSO says.

ASDSO says an important step toward reducing cost is creating and supporting funding assistance by the federal government and states. The majority of dams in the U.S. are privately owned, leaving owners solely responsible for financing dam upkeep and upgrades.