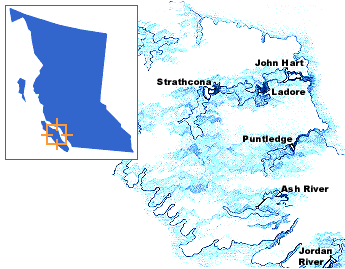 Ahead of its proposed seismic upgrades beginning as early as 2020 at the Campbell River hydroelectric system, BC Hydro announced this week it has partnered with the United States Geological Survey (USGS) to conduct geophysical field testing at the system’s facilities.

Campbell River hydroelectric system comprises three projects and work began at the 67.5-MW Strathcona facility on May 25 and will continue to May 29. Testing is scheduled for the 126-MW John Hart project on May 27 and 28, and 47-MW Ladore Falls on May 30 and 31, according to BC Hydro.

A provincial crown corporation based in Vancouver, British Columbia, Canada, information from BC Hydro indicates that together, the three developments harness a watershed of more than 1,400 km2 and produce bout 11% of Vancouver Island’s power demand.

“Our dam safety program is always looking at ways to improve our seismic knowledge and how our facilities may respond when a significant earthquake hits the region,” said Stephen Watson, BC Hydro spokesperson. “We’ve been fortunate to be able to collaborate with the United States Geological Survey to improve our characterization of the rock beneath our three large dams on the Campbell River system. The USGS field crew has limited time in our province and we’ve been able to develop a joint research initiative to carry out some field work.”

According to BC Hydro, crews will use long survey lines to monitor various waves directed below the ground surface. These waves present no public risk. How the waves refract into or reflect from the surface and interfaces, will provide engineers with knowledge of site rock characteristics.

In addition to bettering its knowledge of site rock conditions to provide increased confidence on how each facility may react to ground shaking from an earthquake, the utility is planning to meet increasing power demand.

BC Hydro’s Site C Clean Energy Project will be a third dam and hydroelectric station on the Peace River in northeast B.C. It will provide 1,100 MW of capacity, and annually produce about 5,100 GWh. As the third project on one river system, Site C will gain significant efficiencies by taking advantage of water already stored in the Williston Reservoir. In December 2014, the Site C project received approval from the provincial government to proceed to construction. Construction of the project started in summer 2015 and will be completed in 2024.