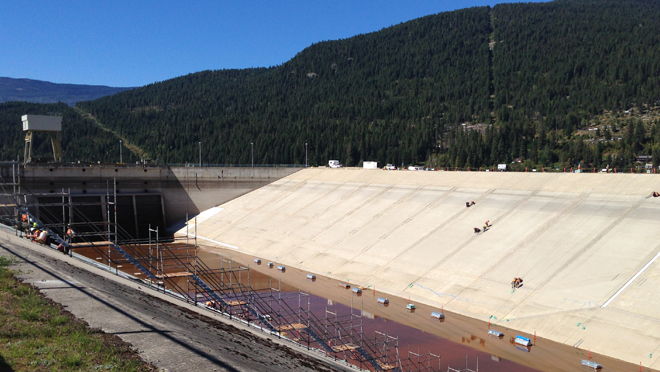 BC Hydro crews have drained Kootenay Canal in order to upgrade the canal lining at the 572.2-MW Kootenay Canal hydroelectric project in British Columbia.

The Canadian utility also reported it finished a five-year project to replace switchgear at the 1,085-MW Mica hydroelectric project on the Columbia River.

Utility crews are to line 16,500-foot-long Kootenay Canal with an extremely durable and specialized geotextile material designed for water storage in canals and reservoirs. The material is expected to extend the lifespan of the canal by about 50 years at a total cost of C$10 million (US$8.86 million).

Meanwhile, BC Hydro said it is taking steps to meet operational requirements while the project is under way. Crews are rerouting water through 51-MW Corra Linn Dam, owned by utility FortisBC, along the Kootenay River. Some water also is being stored in Kootenay Lake until it can be used when the Kootenay Canal project returns to service.

The Kootenay Canal project was built on the Lower Kootenay River in 1976 to take advantage of flow regulation by other hydro projects on the river.

BC Hydro also said it completed a project to install replacement switchgear at the 1,085-MW Mica project in British Columbia. The 500-kilovolt switchgear delivers electricity from Mica’s underground turbine-generators to above-ground transmission lines.

The project replaced 37-year-old equipment in use since Mica was built in the 1970s. New switchgear equipment also was installed to accommodate two new generating units being added as part of the 1,000-MW Mica project expansion.

In addition to ensuring reliable power, the new equipment is to improve safety and reduce greenhouse gas emissions at the facility. The work created nearly 1.5 million person-hours of employment during construction from 2009 to 2014.

BC Hydro took bids in June to replace low-voltage circuit breakers and related equipment at Mica and four other hydroelectric projects in British Columbia.