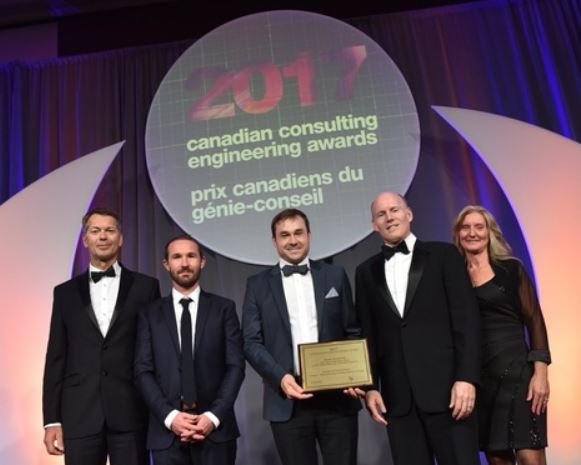 The 16-MW Box Canyon Hydroelectric Project “best demonstrates outstanding environmental stewardship” in Canada, and Knight Piesold accepted the Tree of Life Award for its work on this project. Additionally, the 62-MW Jimmie Creek project received an Award of Excellence.

In fact, an article in the October/November 2017 issue of Canadian Consulting Engineer says Box Canyon “may have the most hydraulically complex design of any run-of-river hydroelectric project in North America, if not the world.”

“The project will provide renewable energy for the BC electrical grid for the next 60 to 75 years, generating approximately 46 GWh/year,” the magazine says. The project began operating in January 2016 and has a 40-year electricity purchase agreement with BC Hydro, according to Box Canyon Hydro Corp. parent company Elemental Energy.

Other companies working on the project include Chant Construction Company as project manager and Jacobs Brothers Construction as prime contractor.

A technical paper on the Box Canyon project presented at HydroVision International 2017 received a Technical Paper of the Year Award.

According to a press release from SNC-Lavalin, the engineering, procurement, construction management (EPCM) contractor for Jimmie Creek, the project offered many challenges and notable features, among them overcoming the steep terrain and mitigating the impact of weather, two years of careful planning to overcome the remote location with no road access and limited access with float plane and boat/barrage, and construction of a new powerhouse built on an elevated rock platform in a compact area to minimize the project footprint.

The Jimmie Creek project is owned by Alterra Power Corporation and is located in the Toba Valley in British Columbia. It produces up to 159,000 MWh of electricity annually. The project is located in Klahoose, First Nation territory, and numerous key contract opportunities were awarded to Klahoose First Nation companies, SNC-Lavalin says.

The company says this is the third award given to the Jimmie Creek Hydroelectric Project, with the other two being the Clean Energy BC Project Excellence Award and the ACEC-BC Award of Excellence in Energy.