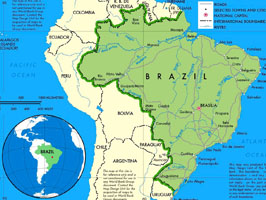 Opinions vary and scientific data mounts as to why Sao Paulo, Brazil, is experiencing one of the country’s most severe droughts in recorded history. But, all affected by the drought agree — many of the hydroelectric facilities that serve Sao Paulo are below 10% capacity.

During the past nine months, the lack of water that flows through, or is maintained in, Brazilian hydro facilities is having an immeasurable negative effect on social concerns in Sao Paulo. An article on TheWeatherNetwork.com reports people suffering from forced water rationing have “burned buses in protest as taps run dry and hijacked water tankers in desperation.”

Why is the situation so dire in areas of the South American nation that is known for its abundant tropical areas?

According to data from the Brazilian governmental organization responsible for measuring the country’s power output, the Ministry of Mines and Energy (MME), domestically operated hydro facilities produce about 70% of Brazil’s electricity. “The public service plants remain as the main contributors, with 84.9% of total generation. The main source is hydropower, although there was a decrease of 5.9% in 2013 compared to 2012,” said the MME.

In reality, this means the country is only able to call upon one-third of its electricity needs from other generation technologies during times when hydroelectricity wanes. The 2014 Brazilian Energy Balance Report, a 288-page aggregate data sheet released by MME, reports the country’s power output in the following categorizations:

Scientific data may offer some of the reasons why the Sao Paulo region is experiencing drought, based on the normal volume of atmospheric moisture absent this year.

According to data from the World Resources Institute, “Brazil showed the best improvement of any country, cutting annual forest loss in half between 2003-04 and 2010-11.” However, the Center for International Forestry Research reports reforms to Brazil’s Forest Code in 2012 provided amnesty to farmers involved in illegal deforestation activities before July 2008. The move also reduced the area of forest landowners need to retain, thus favoring agricultural expansion.

From 2012-13, the country experienced a 28% increase in deforestation. Because 5% of Brazil’s gross domestic product comes from agricultural activities, farmers’ lobbyists successfully argued their case for the reduction of protected areas.

Many published reports indicate trees absorb much of the water in the earth’s atmosphere and hold it within the ecosystem. In the case of the tropical rainforests in Brazil, the volume of water the trees store and release into the atmosphere is locally referred to as “flying rivers.”

The released-water vapor from the trees falls back to earth as rain. Current information cannot confirm the increased deforestation in the Sao Paulo area is the singular cause of the drought, but data gathered in the region found the “flying rivers” did not arrive during the normal August to September timeline. Additionally, with the loss of trees also comes the loss of water that is able to circulate within an ecosystem. This water loss contributes to arid land unsuitable for farming and suffering for all inhabitants who depend on water and the generated-hydroelectricity.