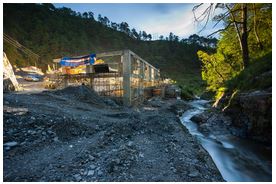 Unidentified armed men were successful in bombing the control room of the 14-MW Sabangan hydro plant in the Philippines, damaging 90% of the equipment at the tapping plant and knocking the facility off line.

Although details of the event, which happened just yesterday, are scarce, Hedcor posted a statement regarding the event on its Facebook page.

“At around 11 pm on October 10, the control room of the 14-MW Sabangan Hydropower Plant tapping point in Otucan Norte, Bauko, Mountain Province was bombed by unidentified armed men.

Nobody was hurt during the incident. We have ensured that all Hedcor personnel are safe and accounted for.

We are cooperating with the Philippine National Police and the Armed Forces of the Philippines, who are investigating the incident and have enhanced security on site.

Although 90 percent of our equipment at the tapping point was damaged, we have activated our Business Continuity Plan to restore the Sabangan Hydro operation within the soonest possible time.

The Sabangan power plant, more than a renewable energy facility of AboitizPower and Hedcor, is a community endeavor. The plant contributes to the welfare of our host community through royalty shares and energy regulation (ER 1-94) shares out of plant operations. We employ people from our host community, we pay local and national taxes, and our CSR activities try to uplift the lives of our neighbors.

We denounce this attach that resulted in the curtailment of power supply and the hampering of development in the province. We continue to closely coordinate with the local governments of Bauko, Sabangan and Mountain Province on our next steps to recover from this unfortunate incident.

Sabangan Hydro was constructed in 2013 and started operating in 2015.

Sabangan is on the Chico River and generates 55 million kWh of electricity annually.

The project was given the green light for construction by the Mountain Province provincial governor in July 2011.

It consists of a 3.2-km-long system from the intake weir to the powerhouse. The powerhouse contains two Pelton turbine-generator units. The project’s conveyance line may be tapped as a source of irrigation for crops by the local residents.

Project owner Hedcor is a subsidiary of Aboitiz Power.