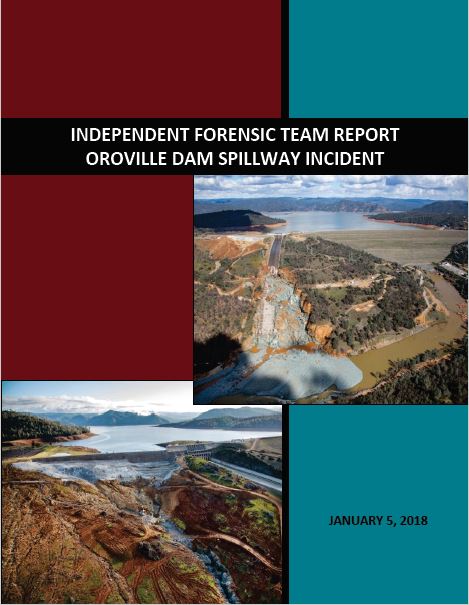 Below are some telling statements surrounding the spillway incidents at Oroville Dam in California, U.S., that occurred in February 2017:

“The incident cannot reasonably be ‘blamed’ mainly on any one individual, group, or organization.”

Nonetheless, “Challenging current assumptions on what constitutes ‘best practice’ in our industry is overdue.”

In its final report, officially released today (from which the quotes above were taken), the Oroville Dam Spillway Incident Independent Forensic Team said there was no single root cause of the incident, nor was there a simple chain of events leading ultimately to the necessity of the evacuation order. “Rather, the incident was caused by a complex interaction of relatively common physical, human, organizational, and industry factors, starting with the design of the project and continuing until the incident.”

Human, organizational and industry factors were cited as:

In the end, the team determined “There were many opportunities to intervene and prevent the incident, but the overall system of interconnected factors operated in a way that these opportunities were missed.”

Specific to DWR, the report says:

“The dam safety culture and program within DWR … was still relatively immature at the time of the incident and has been too reliant on regulators and the regulatory process.”

“… DWR has been somewhat overconfident and complacent regarding the integrity of its civil infrastructure and has tended to emphasize shorter-term operational considerations … [resulting] in strained internal relationships and inadequate priority for dam safety.”

In the end, the lessons learned are probably the most important take-away from the incident and provide a way forward for dam safety worldwide. They are:

As the report succinctly states:

“The fact that this incident happened to the owner of the tallest dam in the United States, under regulation of a federal agency, with repeated evaluation by reputable outside consultants, in a state with a leading dam safety regulatory program, is a wake-up call for everyone involved in dam safety.”