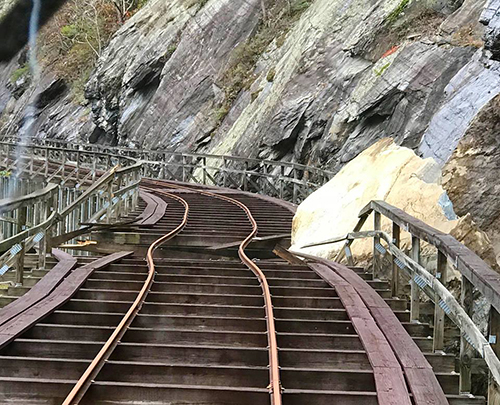 Just after 6 pm GMT (noon CST) today, a rock slide caused damage to a section of a wooden water flume used to supply the Tennessee Valley Authority’s (TVA) 23-MW Ocoee No. 2 hydropower plant located on the Ocoee River in Tennessee.

TVA used several of its social media platforms to post information saying, “A rock slide has damaged a section of the Ocoee No. 2 wooden water flume. There are no injuries reported and no known damage to property downstream. The intake gate to the flume closed immediately, and water is now being diverted down the river channel. TVA site personnel are assessing the damage.”

TVA media relations confirmed the information and said the area in which the damage occurred is “rugged terrain” and crews will begin developing plans to remove to the large boulder that impacted the wooden flume and effect repairs.

No timetable or estimated costs to repair the damage were immediately available.

The Ocoee No. 2 powerhouse, completed in 1912, contains two generation units and is located nearly five miles downstream from the project’s dam.

Ocoee Dam No. 2, is 24 miles above the mouth of the Ocoee River, near the center of the Ocoee Gorge, a steep-sided valley through which the Ocoee Rivers flows westward in the Appalachian Mountains. The dam is constructed of timber crib filled with rock and is 30 feet high stretching 450 feet across the river.

“At the dam, water from the river is diverted into a flume, a wooden trough supported on a bench carved out of the mountainside,” said TVA. “The flume carries the water to a point where it is discharged through pipes to the powerhouse more than 250 feet below.”

According to TVA, the flume system allows the amount of power generated by the 30-foot-high dam to equal that of a 250-foot-high dam. The flume is on the U.S. National Register of Historic Places.

Tennessee is located in the Southeastern U.S. and is the 36th-largest and 16th-most populous state. TVA is a federally owned U.S. corporation and the utility’s service area covers most of Tennessee; portions of Alabama, Mississippi and Kentucky; and areas of Georgia, North Carolina and Virginia.