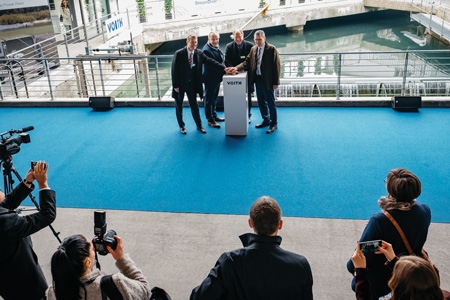 The American Society of Civil Engineers has issued a D grade to America’s dams in its most recent Infrastructure Report Card.

The report, released by ASCE every four years, assigns a letter grade to 16 different categories, including dams. ASCE’s grade for dams remained the same as it was in the 2013 report – a D – while America’s cumulative “GPA” also remained the same at a D+.

The lack of change in the letter grade belies a significant increase in the number of dams ASCE considers to be “high-hazard”, however, with the organization noting that number has climbed to almost 15,500 – up from 14,000 in its last report. Meanwhile, the amount needed to repair these high-hazard structures has increased from an estimated $21 billion to $45 billion.

“The average age of our nation’s dams is 56 years,” the report said. “By 2025, seven-out-of-10 dams in the United States will be over 50 years old. Fifty years ago dams were built with the best engineering and construction standards of the time.

“However, as the scientific and engineering data have improved, many dams are not expected to safely withstand current predictions regarding large floods and earthquakes.”

Full details about the ASCE review can be found at www.InfrastructureReportCard.org.

Voith has completed the construction of a small hydropower plant in Heidenheim, Germany, while also announcing that it will outfit a small project to be built in South Bend, Indiana, U.S.

The first plant – named “Alte Bleiche – is located at Voith’s Heidenheim factory on Germany’s Brenz River. The 35-kW project not only generates power for the manufacturer’s facilities, but also as a demonstration plant for Voith’s customers and employees.

Ground for the Alte Bleiche plant was broken last April.

The year-long construction process saw significant collaboration with Voith’s apprentices, who participated in the design, manufacture and installation of the turbine and control system assemblies. Students from the Cooperative State University Baden-Wurttemberg were also called upon to provide management and engineering services.

Powering Alte Bleiche is one of Voith’s “StreamDiver” turbine units, which will also be installed in the plant in South Bend.

The project is to be installed on the St. Joseph River and will be used to support the University of Notre Dame’s campus sustainability plan that is designed to eliminate the institution’s use of coal by 2020, while cutting the university’s overall carbon emissions by more than 50% by 2030.

Transmission lines will run from the powerhouse – located in Seitz Park near downtown South Bend – to campus, providing about 7% of Notre Dame’s total electrical needs.

Construction on the plant is expected to being this year, with completion scheduled for mid-2019. Voith said the hydro project will not change the aesthetics of park, save for a small surface building that will house control equipment.

The first, awarded by Czech water management authority Povodi Vltavy sp.p, will see Mavel perform a complete overhaul of the 1.9-MW Stvanice hydroelectric project, with work to include the refurbishment of existing turbines, installation of a new runner and distributor, and rehabilitation of the plant’s existing generators.

Mavel said work on Stavnice is expected to be completed in the second quarter of 2019.

The Czech manufacturer was also awarded selected by Povodi Lave s.p. to refurbish the Veletov plant, which is located on the Labe (Elbe) River east of Prague. Per the contract, Mavel will build a new powerhouse; supply a turbine, generator and related equipment; and install, test and commission the project.

Upgrades at Veletov are scheduled for the third quarter of 2019, at which point the plant will have an output capacity of 848 kW.

The U.S. Environmental Protection Agency, Department of the Interior, Army Corps of Engineers and other agencies and programs relevant to the hydroelectric power sector all see funding cuts in the federal budget proposal released in March by President Donald Trump.

If approved by Congress, the EPA would take the biggest hit of any federal department, with a 31.4% – or $2.6 billion – decrease in funding from Fiscal Year 2017. The proposal eliminates 3,200 jobs and reflects Trump’s stated goal of minimizing the EPA.

Newly-confirmed Secretary of the Interior Ryan Zinke would see his department’s budgets slashed to $11.6 billion, or 11.7%, after increases the past five years and an allocation of $13.1 billion in FY 2017.

State government officials of Sarawak, one of two Malaysian states on the island of Borneo, say Sarawak has reached an agreement with the federal government to purchase the 2,400-MW Bakun hydropower project.

Reports estimate the purchase price is US$1.3 billion to US$1.8 billion.

Commissioned in 2011, the Bakun project is Malaysia’s largest hydropower plant, developed at an estimated cost of about US$1.6 billion.

Tun Openg said formalization of the acquisition is expected in May.

The Kenya Tea Development Agency Ltd. has been stopped from awarding a tender for the construction of three small hydropower projects pending a decision from the African country’s High Court.

However, a complaint filed by Hydropower International Ltd. said that award is void because Boom Systems replaced Hadish Engineering with a new partner, VS-Hydro Ltd., after the tendering process ended.

The stay is temporary, but will remain in effect until the court determines whether the award should be voided entirely.

The hydro projects affected include the 1.8-MW Rupingazi, 2.5-MW Cehmosit and 3.6-MW Kipsonoi plants, which are planned for three rivers of the same names.

The Kenya Tea Development Agency received a US$55 million loan from the International Finance Corporation in December 2015 to help construct seven small hydropower plants which are intended to power its factories and supply excess grid to Kenya’s grid.

Samoa looking to cut back on diesel with Fuluasou hydropower plant

Officials from New Zealand, Samoa, the Asian Development Bank and European Union have broken ground on the 700-kW Fuluasou hydroelctric plant in Samoa.

Speaking at a ceremony near Apia, Samoan Prime Minister Tuilaepa Sa’ilele Malielegaoi said the small hydro project is part of the Polynesian island’s effort to reduce its dependence on diesel generated power.

More than 60% of Samoa’s energy is currently produced with diesel, according to ADB data, with fuel costing about 10% of the country’s gross domestic product every year.

The Samoan government is footing the majority of Fuluasou’s costs with a $5.63 million investment, though the EU is adding a $5.06 million grant and New Zealand a $2.49 million grant.

Fuluasou was one of seven small plants in Samoa being studied by ADB.

The user selection board of the €11 million (US$11.8 million) Funding Ocean Renewable Energy through Strategic European Action (FORESEA) project has awarded “Recommendations for Support” to 15 offshore renewable energy technologies.

FORESEA offers a series of funding and business development support packages to ocean energy technology developers at technology readiness level 5+ (i.e., those looking to test subsystems or full-scale systems in a real sea environment) to help lever the further investment needed to take their products to commercialization. FORESEA is funded by the Interreg North-West Europe program and lead by the European Marine Energy Centre (EMEC) in the Orkney Islands, UK.

FORESEA awarded the following technology developers to test their technologies at the indicated test center:

The project is being developed by Snowdonia Pumped Hydro and has sparked controversy due in large part to its location near Snowdonia National Park. However, the UK has been bullish in its support not only for renewable generating sources, but also energy storage projects, making Glyn Rhonwy an attractive proposition.

“There are signs that the government is taking storage seriously,” SPH managing director Dave Holmes said. “The National Infrastructure Commission last year urged swift action on storage, and a team inside the Department of Business, Energy and Industrial Strategy is looking urgently at how planning barriers and market disincentives to storage can be addressed.

“We see the grant of permission for our Glyn Rhonwy scheme as highly significant, signaling a real change that will enable the U.K. to meet carbon reduction targets, while keeping electricity secure and prices for consumers under control.”

According to the Welsh developer, Glyn Rhonwy could deliver about 32 million MWh over its expected life of 125 years. Meanwhile, an equivalent 700 MWh lithium-ion plant would deliver 2.1 million MWh before needing its batteries replaced.

“This means electricity delivered by pumped hydro is twenty times cheaper per MWh than lithium-ion batteries over its lifetime, and carries less environmental baggage,” Holmes said.

The project was originally proposed and approved with a capacity of 49.9 MW, though SPH later decided to install higher output turbines, raising the capacity to 99.9 MW. The developer previously received approval from the UK Planning Inspectorate for the capacity increase, though it is still waiting for approvals from the U.K.’s Secretary of State. Group representatives said the decision should be made by early March.

The Crown Estate agreed to lease 13 hectares of land to Snowdonia Pumped Hydro last April, at which point the project was expected to be operational by 2019.

SPH now says construction of the plant could begin next year, but that it is still seeking private equity funds to build Glyn Rhonwy without public money.

This new department covers the breadth of the global hydroelectric power industry, with news from a variety of sectors. For the latest updates, visit www.hydroworld.com.