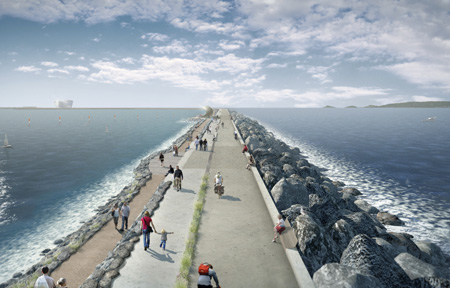 The UK Parliament came under fire last month for its lack of action in issuing a response to an independent review of the Swansea Bay Tidal Lagoon in Wales, potentially thwarting investments into the 320-MW proposal.

The study, led by former Minister of Energy Charles Hendry, was submitted for review in January and notes Swansea Bay – and the emerging tidal energy sector as a whole – could be of immense economic opportunity for the UK.

Parliament has remained mum on the report, however, prompting some members to call for government action lest financiers walk away from what is projected to be a US$1.7 billion investment.

The project was previously accepted for consideration by the UK’s Planning Inspectorate in March 2014, when it qualified as a Nationally Significant Infrastructure Project under the UK’s Planning Act of 2008. Its developer, Tidal Lagoon Swansea Bay PLC, received planning consent from the Department of Energy & Climate Change in June 2015.

“It has been eight months since the publication of the review,” said Rachel Reeves, Labour Member of Parliament for Leeds West. “Can the minister say now when the government will publish its response, as there is a very real risk that the investors needed to fund this project will walk away unless there is a decision made very soon?”

When Bolivian President Evo Morales formally launched operations of the 120-MW Misicuni hydro plant in September, the country moved one step closer to its goal of reducing thermoelectric output.

Ende (the National Electricity Company S.A.) developed the hydro project, now the “largest hydroelectric power plant in the country,” at a cost of US$142 million. The powerhouse contains three 40-MW Pelton turbine-generator units and will be operated by Corani, a subsidiary of Ende. The project is in the Misicuni River basin in El Paso, Quillacollo municipality, Cochabamba province.

The Inter-American Development Bank contributed funding for this project, along with the General Treasurer of the Nation and Ende. Ende says it took about half a century to complete the development of Misicuni.

In addition to generating electrical energy, Misicuni will contribute to providing drinking water and irrigation water.

Dominion Energy Virginia is conducting in-depth studies of two potential sites for a pumped storage hydropower facility in southwest Virginia in the U.S.

The company is considering two possible locations: a 4,100-acre site in Tazewell County and an abandoned mine in Wise County. The potential generating capacity of the facility has not been disclosed.

Dominion Energy filed an application for a preliminary permit with the Federal Energy Regulatory Commission for the Tazewell location in September. The company has contracted with Virginia Tech to conduct the study of the former Bullitt Mine near Appalachia.

Dominion Energy says the preliminary estimate for a single facility could be in the range of $2 billion and that it could provide millions in tax revenues to counties in the state’s coalfield region. The project would also create hundreds of jobs during construction and up to 50 permanent jobs when complete.

The company expects to make a decision on which site to advance by mid-2018.

The California Division of Safety of Dams (DSOD) in the U.S. has released updated information on 1,249 dams under its jurisdiction, including downstream hazard classification, condition assessment and reservoir restriction status for each dam.

According to DSOD, this latest information on dam safety “reflects the most recent physical inspections and comprehensive re-evaluations by DSOD engineers and engineering geologists, as well as technical analyses performed by dam owners.”

The report lists downstream hazard classification for each dam that is based solely on the size of the dam’s reservoir and population that would be impacted by a dam failure. The classification does not reflect the condition of the dam or its structures.

More than half of the dams under DSOD’s jurisdiction are classified as high or extremely high hazard.

A total of 139 countries worldwide could convert to 100% renewable energy – from wind, water and solar – by 2050, according to scientists in the Atmosphere/Energy Program at Stanford University.

To achieve this, these scientists present roadmaps that would:

In an article published online in Joule magazine, they say, “… Every country must have an energy roadmap based on widely available, reliable, zero-emission energy technologies.”

These roadmaps “are far more aggressive than what the Paris agreement calls for, but are still technically and economically feasible,” they say. They are based on a solution of electrifying all energy sectors and providing all electricity with 100% wind, water and solar power.

The authors briefly address power from ocean energy, saying that “ … we assume that two technologies not yet widely used, tidal and wave power, are installed in small amounts in a few countries.”

Regarding the amount of generation needed, the authors do not propose building additional hydro, instead saying the average capacity factors of hydropower plants are assumed to increase from their current world average values of about 42% up to 50%. “In many places, hydropower use is currently suppressed by the availability and use of gas and coal, which will be eliminated here. If current capacity factors are limited by low rainfall, it may also be possible to make up for the deficit with additional run-of-the-river hydro, pumped hydro, or non-hydro [wind, water and solar] energy sources.”

The authors also address “the additional energy-storage capacity needed for balancing time-dependent supply and demand during a year,” but it is not clear how pumped hydro fits in the future mix.

Among the news articles from around the world posted on HydroWorld, which were the most read in August?