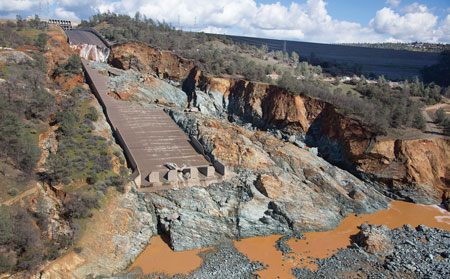 The California Department of Water Resources in the U.S. received authorization in July – from the California Division of Safety of Dams and the Federal Energy Regulatory Commission – to proceed with its final 2017 construction plan for the Lake Oroville Spillways Emergency Recovery Project.

The first phase of construction will be completed by Nov. 1, 2017, DWR says, with the objective of ensuring the main spillway can safely pass Feather River watershed flows this year. This phase involves:

The remaining construction, which also requires federal and state approval, will be completed in 2018 and includes demolishing and reconstructing the uppermost 730-foot-long portion of the main spillway, adding structural concrete to the entire main spillway, resurfacing and hydro blasting the energy dissipaters at the base of the spillway, and construction of a roller-compacted-concrete buttress and splashpad on the emergency spillway.

Repairs to the Tennessee Valley Authority’s Boone Dam have ballooned by at least 50% since work began in 2015, according to statements made by TVA president Bill Johnson during an August earnings call.

The project, intended to address seepage at the structure, began in December 2015, at which point the federally-owned corporation estimated it would cost between $200 million and $300 million, and require between five and seven years to complete.

Now, however, TVA projects a final price tag closer to $450 million and at least five more years of work for completion.

Located on the South Fork Holston River on the border between Tennessee’s Sullivan and Washington counties in the U.S., Boone Dam is a 160-foot-high, 1,532-foot-long structure that was completed in 1952.

TVA discovered seepage under the embankment in October 2014 in the form of a sinkhole at the base of the structure, eventually revealing a complex series of underground geological pathways allowing water from both upstream and downstream sources to cause internal erosion.

The U.S. Trade and Development Agency has announced its support for Saigrene Energy Kenya Ltd., which will help the developer explore the potential for run-of-river hydro projects at five sites in Kenya.

USTDA’s support comes in the form of a grant of unspecified value, which will allow for consulting group Knight Piesold to perform feasibility studies for the five plants. The objective is twofold: While the plants would add a cumulative capacity of 17 MW to the African country’s grid, their development also opens the door for U.S. exports.

Saigrene Energy said it hopes the initiative will also lead to technical training and job creation in Kenya.

The Australian Renewable Energy Agency (ARENA) will provide $2.49 million in funding to attract future investment via a three-year project that will explore the tidal energy potential in Australia.

Global firm Jacobs Engineering Group Inc. has entered into a definitive agreement under which it will acquire all outstanding shares of international consultant CH2M. The cash and stock deal has an enterprise value of about $3.27 billion, including $416 million of CH2M net debt, creating what Jacobs Engineering is calling a “$15 billion global solutions provider.”

Dallas-based Jacobs expects to finance the $2.4 billion transaction through cash on hand, its existing revolving credit facility and $1.2 billion from a new three-year term debt arranged by BNP Paribas and the Bank of Nova Scotia. Jacobs said it expects to have about $900 million in remaining liquidity after the deal is closed.

The transaction is expected to close during the first quarter of Jacobs’ 2018 fiscal year but must first receive regulatory and CH2M stockholder approval.

The US$4.5 billion facility is being built by the China Gezhouba Group Co. Ltd. and continues Chinese investment into the African country’s economy. Angolan infrastruture projects have benefitted from nearly $50 billion in total Chinese investments, according to the Chinese embassy.

Work on Caculo Cabaca is scheduled to take 80 months, and CGGC expects to hire as many as 10,000 workers. CGGC will also operate and maintain the plant for a four-year period after its completion, as well as provide training for Angolan technical personnel.

A quorum has been restored to the Federal Energy Regulatory Commission, following the unanimous confirmation of Neil Chatterjee and Robert Powelson by the U.S. Senate. Four of FERC’s five commissioner seats had been vacant since July, leaving the agency unable to move forward on substantive orders, initiatives and regulations.

Chatterjee most recently served as energy policy advisor to Senate Republican leader Mitch McConnell, while Powelson is a commissioner for the Pennsylvania Public Utility Commission and is president of the National Association of Regulatory Utility Commissioners.

Among the news articles from around the world posted on HydroWorld.com, which were the most read in July?