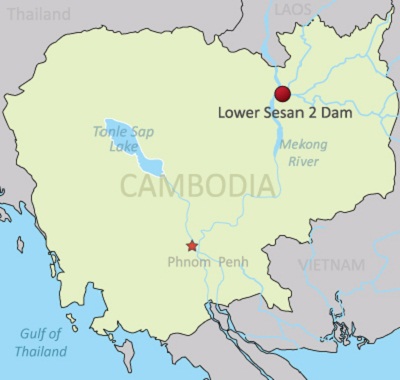 Cambodia is moving forward with development of the Lower Se San 2 hydropower project and is seeking support from surrounding nations.

“Sarawak and Cambodia can work together and share experiences in developing hydropower and the tourism sector,” said the chief minister. “By working together, we can share our common interest to face the critics, especially non-governmental organizations (NGO) and the developed nations.”

This statement was timely as criticism mounts over the development of a proposed dam and 400-MW hydropower plant on the Se San river in northeastern Cambodia.

With only 26% of the country’s population having access to electricity, a hydroelectric power plant could provide a boost to the country on an economic and rural electrification level. The efforts to develop the plant correlate to the government’s two part plan to provide electricity “of any type by the year 2020” and to have grid-quality electricity to 70% of households by 2030.

The government granted approval for the project in November 2012.

Owned by the Hydro Power Lower Se San 2 Co. Ltd, a joint subsidiary of China’s Hydrolancing International Energy and the Royal Group of Cambodia, the Lower Se San 2 Dam will be constructed starting in early 2014.