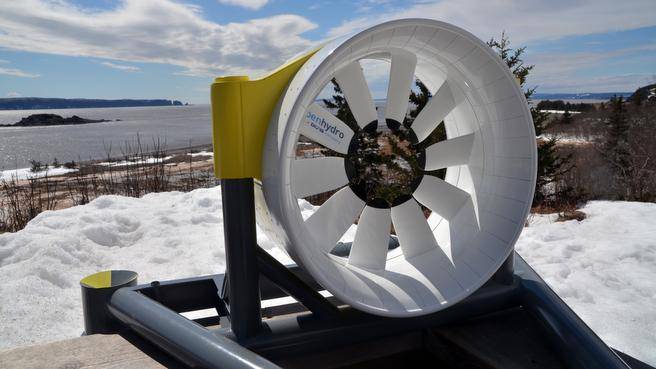 According to an announcement from Cape Sharp Tidal this week, their joint venture between Emera Inc. and OpenHydro is seeking additional information before scheduled deployment of a set of 2-MW Open-Centre marine hydrokinetic (MHK) ducted turbines at the Fundy Ocean Research Center for Energy (FORCE) in the Bay of Fundy, Nova Scotia, Canada.

Cape Sharp Tidal scheduled the move of the five-story-tall turbines from Pictou, the week of June 5, for installation in the Minas Passage in late June or early July. But, Fisheries and Oceans Canada (DFO), area fishermen, scientists and the general public have expressed concerns about appropriate monitoring measures in place prior to moving forward with installing and operating the first two experimental turbines.

According to project details, Cape Sharp Tidal is seeking to use the initial 4-MW farm as the first phase of a commercial-scale project, subject to regulatory approvals.

According to published reports, however, DFO agreed the project should still go ahead.

But, Paul Laberge, project lead for Emera, said the company is placing additional project activity on hold. The company has consulted extensively with area stakeholders, he said, but wants to speak further with all involved before continuing with deployment.

No date has been announced for project continuation and the cost of the delay has not been released.

In April of this year, DFO released their report, Review of the Environmental Effects Monitoring Program for the Fundy Tidal Energy Project. Report findings indicate FORCE’s follow-up baseline report and SLR’s proposed EEMP are lacking in the following areas: