A three-dimensional computational fluid dynamics model of the tailrace at Milford Dam indicated there would be no areas approaching the entrance to the new fish lift where flow velocity prevented fish from entering the lift.

By Laura Rozumalski and Michael Fullarton

Black Bear Hydro Partners retained Baird & Associates in 2011 to provide three-dimensional modeling services in support of development of fish passage enhancements at the company’s 8-MW Milford Hydroelectric Project, on the Penobscot River in Milford, Maine. The fish lift project required modifications to existing structures, with the potential for changes in flow and current regimes in the tailrace. Design and operation of the fish lift will affect the nature of currents and hydrodynamics in the tailrace, with the goal of providing attraction flows that will draw fish to the fish lift entrance and into the attraction chamber. The fish lift is needed to pass fish upstream, to satisfy regulatory requirements included in the Federal Energy Regulatory Commission operating license for this project. The three major migratory fish species considered in this study were Atlantic salmon, Atlantic shad and river herring (alewife and blueback).

The purpose of the numerical modeling activities was to develop and conduct 3D hydraulic modeling of the tailrace below the Milford project. For this study, the computational fluid dynamics (CFD) model FLOW-3D was used given the highly dynamic flow fields and complex 3D structures that characterize the study site. Eight modeling scenarios were developed, one including existing conditions and the other seven representing various flow and generation alternatives to assess the proposed fish lift system. A key objective was to test how different operating conditions will influence hydrodynamics in the tailrace and downstream of the fish lift entrance and attraction chamber.

Results of the hydraulic modeling showed that water velocities along the approach to the proposed fishway entrance did not exceed the swimming capabilities of the slowest target species (river herring), based on sustained swim speed of 3 to 5 ft/sec.1 The fish lift structure and attraction flow generated a relatively consistent current pattern along the eastern tailrace wall and should promote efficient upstream movement of the fish to the fishway entrance. The model results do not show the existence of any adverse eddies at the fishway entrance. Similar fishway entrance configurations have been used at other dams in Maine and Connecticut.

Several tasks were undertaken to support development of the CFD model, including assembly and review of existing data, development of solids models, and a field program to quantify flow and current patterns in the tailrace.

The field program involved a visual inspection of the site and powerhouse, as well as current measurements in the tailrace using the Teledyne RD Instruments StreamPro Acoustic Doppler Current Profiler (ADCP). The ADCP was used to collect discharge and velocity data across the tailrace and throughout the water column. Transects across the tailrace were taken with the unit tethered to a pulley system. The transect data were post-processed using WinRiver II software.

Baird conducted the field program on June 21, 2011. The ADCP unit was run along the same transect line four times and, despite the turbulence, the discharge measurements were within 4% of one another. The tailrace discharge was determined to be 6,180 cubic feet per second (cfs) (based on the average of the four ADCP transects), with a mean velocity of 2.5 ft/sec. This is about 6% greater than the estimated flow of 5,810 cfs, which was derived from a combination of turbine nameplate rating, fish ladder discharge and downstream transport flows. The difference in flow is small, suggesting a good agreement between the measured and estimated flow moving through the powerhouse. The data collected with the ADCP were used to calibrate the CFD model.

The numerical model (see Figure 1 on page 54) was developed to represent operational conditions during the field program and then calibrated against ADCP current measurements. The model domain included the powerhouse and about 250 feet of the tailrace and was contained on either side by an east and west wall. All turbine bays and existing fish passages were included in the model. Momentum sources were used to represent the flow characteristics from the draft tubes and water levels were used to define the downstream boundary. 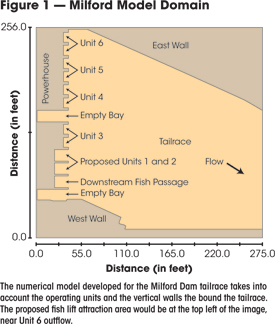 Initial model runs were carried out using a 5-ft grid spacing to minimize model run times. As model calibration results converged on the measured data, the grid resolution was reduced to 2 feet and finally 1 foot. Roughness and resistance terms were considered during calibration, although it should be noted that this parameter did not have a significant impact on the results given the relatively short length of river (less than 300 feet) and the strong flow conditions.

The modeled values compared well within the measured readings as it captured trends in the magnitude and spatial distribution of currents (see Figure 2). The measured data showed the wide range of current direction caused by the large eddy along the western wall of the tailrace – current vectors span the entire range of 0 to 360 degrees. The bulk of flow occurred in the eastern half of the tailrace as Units 3 to 6 were in operation; these flows were characterized by stronger current speeds and more consistent directions with smaller, more localized eddy currents. The location and orientation of the draft tubes in each bay caused upwelling to occur immediately downstream of the powerhouse. This phenomenon was also evident in the CFD model.

Once calibrated, the model was used to investigate the influence of alternative operating and structural configurations on tailrace hydrodynamics and attraction velocities at the proposed fish lift entrance.

The model was initially used to simulate a baseline condition, which was defined by a total flow through the powerhouse of 4,400 cfs. Strong currents were evident in the tailrace along the east wall as Units 4, 5 and 6 were at operational capacity. Predicted velocities along the east side of the tailrace were 4.5 to 5.5 ft/sec. A large eddy current was observed in the western half of the tailrace, which diverted flow from the downstream fish passage toward the east wall. Similar eddy current patterns were measured with the ADCP during the field investigation. Note that most of the existing turbine units are located on the eastern half of the powerhouse, which is why the bulk of the flow is concentrated along the east side of the tailrace.

A range of operational configurations were simulated for the fish lift system that was ultimately proposed at the intersection of the powerhouse and east wall, with an attraction flow of 210 cfs. This included high, average and low river flow conditions, as well as two new turbine units proposed for bays 1 and 2, in addition to the existing four turbines. In total, seven scenarios were modeled. The fish lift entrance source was also refined to follow changes in tailwater elevations. These refinements provided a better representation of surface currents near the fish lift entrance and helped emphasize any vertical components of velocity in the tailrace near the powerhouse, such as surface eddies or upwelling. Figure 3 on page 58 shows the location of the proposed fish life and a two-dimensional map of surface current speeds with all units operating (including the proposed units). 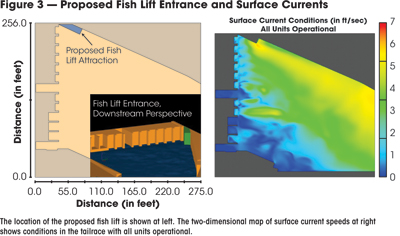 Figure 3 illustrates the modeled current field across the entire tailrace model domain. Many unique flow features can be seen, including flow from the turbine units, discharge from the fish ladder and the proposed lift system. Due to the angled alignment of the powerhouse against the eastern bank, flow is concentrated along the eastern tailrace wall and well-defined. This results in a large slow eddy circulation. A hot spot was evident at the corner of the fish lift system, but this was not a concern and could be alleviated somewhat by moving the entrance closer to the powerhouse. The approach velocity downstream of the fish entrance was relatively constant and should allow for efficient upstream movement into the attraction chamber.

Results of the hydraulic modeling do not show any areas along the approach to the proposed fishway entrance where water velocities are greater than the swimming capabilities of the target fish species. There are isolated areas of higher velocity in the river downstream of the training wall, such as natural bedrock outcrops and riffles.

All model runs show a distinct delineation between the tailrace flows and attraction flows at the fishway entrance. The fishway attraction flow appears to induce a consistent flow along the tailrace wall. This should promote efficient upstream movement by minimizing milling and searching behavior of migrating fish that are swimming upstream along the east tailrace training wall. Similar fishway entrance configurations (single entrance, facing downstream, located in the powerhouse tailrace adjacent to a training wall) have been used at other sites, such as Cataract Dam on the Saco River and Rainbow Dam on the Farmington River.

The zone of higher influence near the fish lift entrance is not of critical concern and is alleviated slightly by moving the entrance farther upstream. To balance desires to have the entrance as close to the powerhouse as possible yet far enough away to avoid draft tube upwelling, and provide attraction flow flexibility, Black Bear Hydro (now owned by Brookfield Renewable Energy Group) moved the opening 5 ft closer to the powerhouse.

The fish lift began operation in April 2014. It has passed fish, although no quantitative data is yet published.

Laura Rozumalski, P.E., is a water resources engineer and Michael Fullarton is an associate with Baird & Associates.