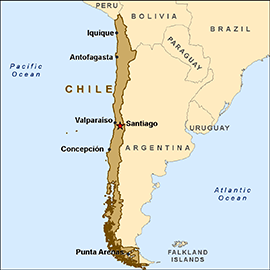 The eight-year project is supported by approximately US$20 million in cash and in-kind funding. Chilean development organization Corporación de Fomento de la Producción (CORFO) will provide significant money and expertise in the venture that will conduct research and development activities on marine hydrokinetics technology (MHK), taking into account the specific natural conditions of the Pacific Ocean in Chile.

According to the U.S. Energy Information Administration (USEIA), Chile is South America’s fifth-largest consumer of energy, but it is only produces a relatively minor amount of fossil fuels. “In 2012, Chile imported 97% of its consumption,” according to USEIA.

Because Chile is heavily dependent on energy imports, the county seeks to develop greater domestic energy production. “Most of Chile’s natural gas imports arrive as liquefied natural gas from Trinidad and Tobago, Qatar, and Yemen. Chile has two regasification terminals: Mejillones, in the north, and Quintero, near the large urban centers of Valparaà­so and Santiago,” said the USEIA.

The Chilean government through its Ministry of Energy and Center for Renewable Energy is encouraging private investment in the country’s ocean energy sector, according to published reports. Ocean Renewable Power Co., headquartered in Portland, Maine, is one of the companies the Chilean organization is using because of the significant tidal and river energy resources estimated at several hundred megawatts off of the southern reaches of the Chilean coast.

By 2019, MERIC hopes to have experience and a consolidated infrastructure that may allow the organization to provide services to local and international industry interested in testing MHK technologies in the Chilean marine environment.