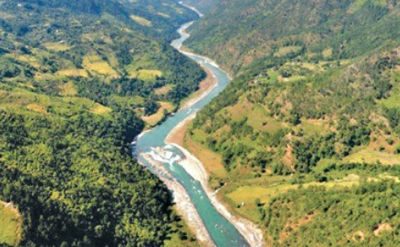 Construction of Nepal’s 36.6-MW Kabeli A hydroelectric plant is under way, following the laying of a foundation stone last week.

The project is located on the Kabeli River between Nepal’s eastern Panchthar and Taplejung districts, and is being constructed to help alleviate the country’s energy deficit.

Kabeli A was one of several hydropower projects shortlisted for funding by the World Bank in the late 1990s. The international lending agency then approved a US$84.6 million loan for its construction in May 2014, at which time it was expected ground would be broken in Spring 2015.

Delays, including a stoppage by Nepal’s Commission for the Investigation of Abuse and Authority (CIAA) in November 2014, have pushed the anticipated completion date to 2020.

A review of the project led the International Hydropower Association to recognize Kabeli A under its Hydropower Sustainability Assessment Protocol in March 2015.