The cost of the proposed scheme is not available, but if approved, work on the project would begin in May 2018 with an expected completion date sometime in July 2018, according to estimates from Greenearth Hydro.

Powys-based Greenearth Hydro in its plans to the council said it would build a project that “includes the construction of a powerhouse adjacent to the waterfall, which contains the hydro turbine and generator. An intake box will be installed to the existing dam and penstock to the powerhouse. A cable will be laid to provide renewable electricity to the visitor’s center.” 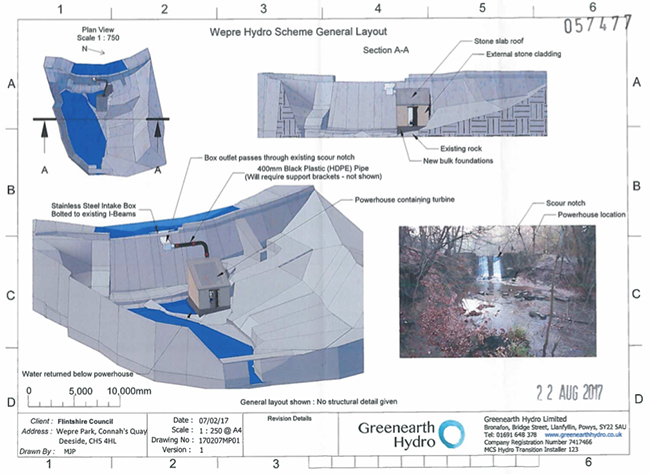 Information from Greenearth Hydro within it submission say the new system would “help to mitigate climate change and will contribute to the targets set out in Flintshire’s carbon management and improvement plans.”

According to Greenearth, in 2016 the Flintshire Council Environment Committee approved Greenearth Hydro to prepare plans for a scheme at a waterfall in Wepre Park after the council reviewed a feasibility study and decided the site would benefit from hydropower.

Wepre Park is home to Ewloe Castle, an 11th century Scheduled Ancient Monument that is a native Welsh castle near the town of Ewloe in Flintshire. The 160-acre park also houses the Visitor’s Center, which is on the site of a hall that was demolished in the 1960s.

In May, HydroWorld.com reported Welsh renewable energy developer Dulas completed the addition of a 70-kW hydropower project to an existing water treatment plant in Myndd Llandygai.

Work on the retrofit began last spring, Dulas said, and was completed with a minimal disruption to the plant’s operation and no loss of provisions from the reservoir.

In 2014 on Culligran Estate about an hour west of Inverness, Scotland, the 700-kW Neaty small hydropower plant, a joint venture between Gilkes Energy and landowner Frank Spencer-Nairn, began operations.