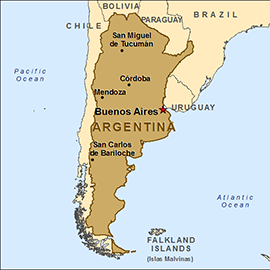 The Argentine government’s energy and environment ministries will move forward with construction of the 1,740-MW Kirchner-Cepernic hydro complex on the Santa Cruz River in Santa Cruz province, Argentina.

China’s state-run Xinhua news agency and BNamericas report the government made the announcement on Monday. A binational consortium that includes China Gezhouba Group, Electroingenierà­a and Hidrocuyo hold the project’s construction contract. Financing for the plants is to come in large part from the China Gezhouba Group Co. Ltd, which is expected to be about US$5 billion.

The Supreme Court suspended major works on the dams in December 2016, pending completion of a new environmental impact study and public hearing.

In May, HydroWorld.com reported the ministries were completing additional environmental impact studies before constructing the project. Prior to posting the results of its ruling, the Supreme Court held hearings in July.

Information on when work will resume on the project and a completion date are not immediately available.

The Nestor Kirchner and Jorge Cepernic projects are to be located about 80 km apart and have capacities of 1,140 MW and 600 MW, respectively. Kirchner is expected to feature a 75-meter-high concrete-faced rockfill dam and Cepernic a 43-meter-high dam.