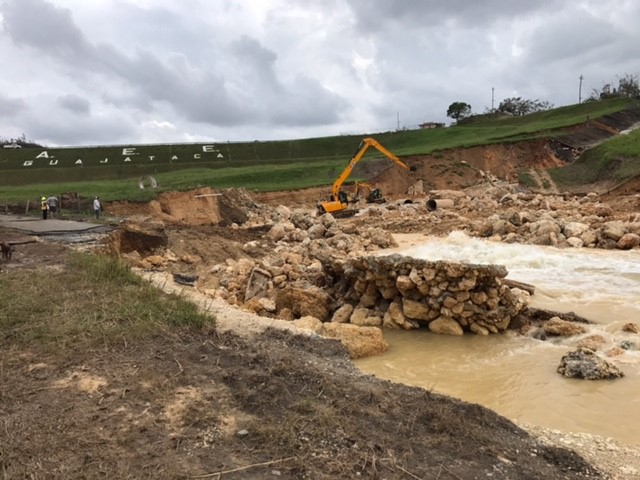 As the Guajataca Dam spillway in Puerto Rico continues to erode after Hurricane Maria’s September deluge of 35 inches of rain in some places, officials from the U.S. Army Corps of Engineers (Corps) have released details of efforts being taken stabilizing the dam’s spillway.

The non-hydropower earthen dam is located in Northwest Puerto Rico, and provides flood-risk management and water supply to more than 350,000 residents. The dam impounds Guajataca River creating Guajataca Reservoir, which was built in 1928. According to Puerto Rico Electric Power Authority (PREPA), the reservoir originally had the capacity to store 48.46 million cubic meters of water for domestic, agricultural and industrial use.

On Tuesday, the Corps said at the direction of the Federal Emergency Management Agency and in support of the government of Puerto Rico: The Corps, Department of Defense and PREPA are taking measures to “slow the erosion of Guajataca Dam’s damaged spillway.” 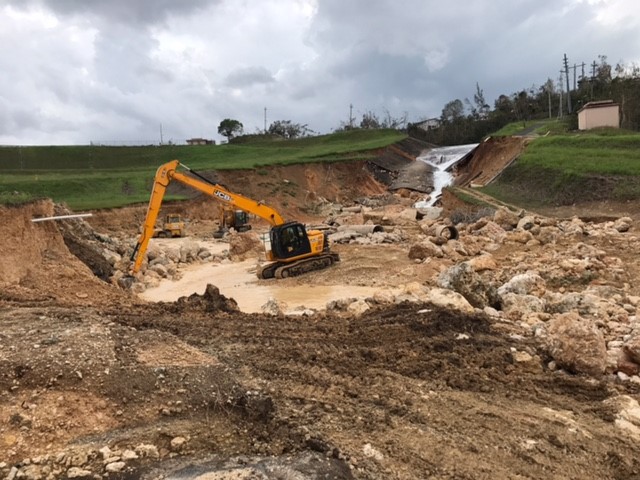 Teams of engineers are working to remove debris from the dam and channel to improve the water’s flow. (Photo/USACE)

The Guajataca Dam spillway stabilization is the second major dam spillway mitigation effort related to precipitation to occur this year at a U.S. controlled dam. In August, HydroWorld.com reported on the timeline of events at the Oroville Dam spillway damage in California, which took place in February. 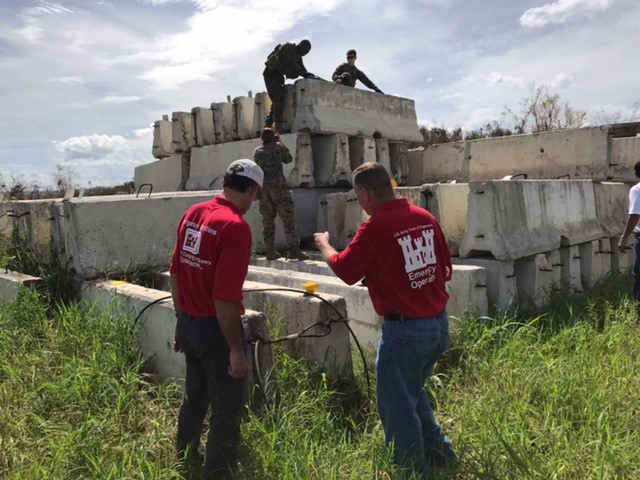 U.S. Army Corps of Engineers personnel attach cables to jersey barriers that will then be sling loaded by helicopters and placed at the bottom of the dam. (Photo/USACE)

According to reports today from the Independent, aircraft are lifting concrete barriers and placing them at the damaged area of the Guajataca Dam.

According to the Corps, stabilizing the spillway to prevent further deterioration will be a two-phase operation.

The U.S. 26th Marine Expedition Unit is currently placing nearly 350 concrete jersey barriers, attaching cables from the barriers to Marine helicopters and lifting the barriers for placement at the bottom of the dam. The Corps will then strategically position the barriers into place against the damaged spillway.

Personnel from the Pennsylvania National Guard will then place hundreds of “supersacks” filled with sand to further reinforce this emergency action. On Sept. 30, the U.S. Transportation Command delivered 900 super sandbags for spillway stabilization to Aguadilla Airport, a joint civil-military airport located on the island in Aguadilla.

Corps engineer in charge of the Guajataca Dam stabilization, Lt. Col. Roberto Solorzarno, in published news reports said, “All that water is just being held by this thin line. If we get maybe another 10 or 11 inches in a few days, then we will really have an issue.”

Keeping the spillway functional, according to the Corps, is important because it channels water around the dam when the water gets too close to the top of the dam.

“We are ready to support PREPA with these Department of Defense assets to accomplish this vital mission for the people of Puerto Rico,” said Col. Jim DeLapp, commander of the Corps’ Puerto Rico Recovery Field Office. “This critical emergency measure is an important first step in stabilizing the dam to allow for further remediation actions.”

According to PREPA, Guajataca Dam is an earthen dam that has a crest 9.5 meters wide, 316 meters long and an elevation of 202.5 meters above mean sea level.

The impoundment creates Guajataca Reservoir, the principal water supply for the Northwestern Puerto Rico. It is located between two towns, about 8 km south of Quebradillas and about 10 km northeast of San Sebastian.

The dam’s spillway is located on the left abutment, and consists of an approach channel; an uncontrolled semicircular ogee crest at an elevation of 196.9 meters above mean sea level, and a tapering trapezoidal concrete chute that terminates at the old river channel.

The outlet works intake, located through the right abutment, consists of a diversion inlet, an intake tower, an intake shaft, a horseshoe tunnel and a gate chamber with two side-by-side 1.22 by 1.22-meter-high pressure gates. Extending from one of the gates is the canal outlet works, which consists of a 54-inch reinforced concrete cylinder pipe that tapers to a 42-inch reinforced concrete cylinder pipe, a flow meter, a 1.37-meter-diameter sleeve valve for regulation and an outlet canal.

Extending from the other gate is the river outlet works, which consists of a horseshoe section tunnel, a transition structure, a 0.91-meter-diameter reinforced pipe, and a terminal structure. The river structure works discharges into Guajataca River, while the canal outlet structure supplies water for municipal needs.

In 1989, Hurricane Hugo hit Puerto Rico, causing overtopping of Carraizo Dam and flooding the hydroelectric facility, rendering it inoperable. The plant remained closed until the Puerto Rico Aqueduct and Sewer Authority elected to redevelop the facility in 2013.