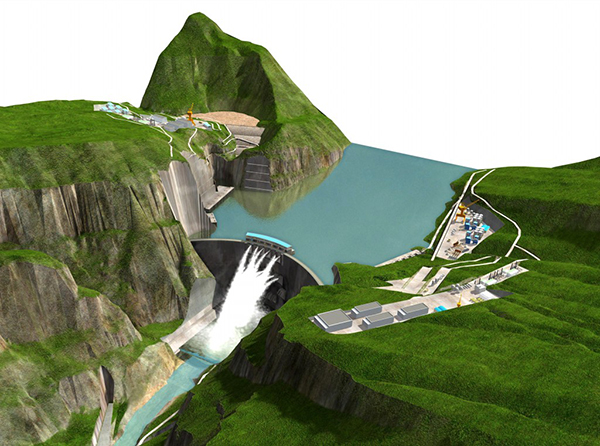 China Three Gorges Corp. (CTGC) has begun construction of the 16-GW Baihetan hydropower station located on the lower reaches of the Jinsha River, between the borders of Sichuan and Yunnan provinces in Southwest China.

China’s state-run news agency, Xinhua, reports construction on the station began today. According to 2016 estimates from China’s National Development and Reform Commission, the project will cost about US$6.3 billion.

According to CTGC, the project’s main structures consist of the dam, flood discharge structures, water diversion and power generation facilities. The dam is a double-curvature arch dam with a maximum height of 277 m, a crest elevation of 827 m, a crest width of 13 m and a maximum bottom width of 72 m.

The underground powerhouse will contain 16 generating units at 1,000 MW each and have an average annual power output of 60.24 TWh, which is equal to two-thirds of Beijing’s electricity consumption in 2015, CTGC said.

The first group of units are expected to begin operating in 2021. The project should be fully-commissioned by the end of 2022.

About 100,000 residents in Sichuan and Yunnan will be relocated to make way for the project that will manage a basin area of 430,000 km2, which is 91% of Jinsha River’s basin area.

During the first week of July in an attempt to ease flood pressure on the Yangtze River, Three Gorges and the 2.9 GW Gezhouba hydro plants shut down a combined 26 generators, according to Xinhua. Three Gorges cut its output from 18.12 GW to 6 GW and Gezhouba from 2.9 GW to 1.5 GW.

In July, Voith Group and CTGC signed an agreement in Berlin, Germany, in which Voith will supply two 350 MW units for the US$1.5 billion 2.1-GW Zhejiang Changlongshan pumped storage hydropower station.

The project is located in Anji County, Zhejiang province, between the cities of Tianhuangping and Shanchuan.