Over four years, multiple entities within the hydropower industry have worked to advance design, construction and installation of a specific “fish-friendly” turbine design. Efforts are under way to find a hydroelectric project operator to install this unit and demonstrate its effectiveness for safely passing fish and producing electricity.

In an ideal operating scenario, every drop of water available to a hydroelectric powerhouse is run through the turbines to generate electricity. However, the need to support high fish passage survival at most hydropower facilities precludes this from happening. In the absence of turbine technology that provides high fish passage on its own, hydro plant owners must rely on such alternative measures as spill or bypasses to protect fish.

To help overcome this problem, the Electric Power Research Institute (EPRI), U.S. Department of Energy (DOE), Alden Research Laboratory Inc., Voith Hydro Inc. and several industry partners have been working to advance design of a “fish-friendly” turbine. This turbine has been conceptualized, tested using physical scale and computational fluid dynamics modeling, redesigned, produced at model scale, and tested again. As a result of this work, the Alden turbine is now ready for installation and testing at a hydroelectric plant, and efforts are under way to find an industry partner to accomplish this next step.

Four years of work have gone into a collaborative research and development project funded by EPRI, DOE and hydropower industry partners such as Brookfield Renewable Power, Dairyland Power Cooperative, Electricite de France, New York Power Authority, New York State Energy Research and Development Authority, Puget Sound Energy, SCANA Corp. and Southern Company. The objective of this project was to complete the developmental engineering required for the “fish-friendly” turbine developed by Alden to prepare it for full-scale deployment and testing.

In 2009, EPRI, in response to a 2008 DOE funding opportunity announcement with cost-sharing support from the hydropower industry, was awarded a $1.2 million DOE grant, matched by an equal amount from EPRI and its industry partners, to conduct engineering development and physical scale model performance testing of the Alden turbine. The developmental engineering included:

– Using computational fluid dynamics (CFD) to convert a conceptual design into a design from which the turbine can be built; and

– Constructing and testing a physical model of the turbine to evaluate its performance characteristics for economic analysis.

The Alden turbine was developed through DOE’s former Advanced Hydro Turbine Systems Program and, more recently, through EPRI’s Waterpower Program and DOE’s Wind & Water Power Program. The turbine was designed to support high fish passage survival, which would offset the need for measures – such as intake screens, fish passage spills and alternative downstream fish bypasses – that are expensive and decrease generation. To reduce injury to fish, the Alden runner has: only three blades, no clearances between the blades and the crown or housing, and, with the exception of small areas around the blade leading edges, pressure and velocity (shear) gradients that meet established bio-criteria for safe fish passage.

Before 2009, numerous studies supported by DOE, EPRI and industry collaboration were conducted to validate the theoretical concept of the turbine. Studies included: CFD modeling, use of a one-third-scale test facility to evaluate the turbine biological and engineering performance, additional conceptual turbine development efforts (in 2006), and laboratory experiments that examined the relationship between turbine blade leading edge geometry and fish injury/survival after blade strike.

– Reducing the number of blades relative to conventional applications;

The blade shapes were developed to meet criteria for pressure change rates, shear rates and minimum pressures through the runner. The blades feature relatively thick semi-circular entrance edges to minimize strike damage to fish, extremely long blades with nearly 180 degrees of blade wrap, and a runner height that is larger than a conventional turbine of similar diameter. Each blade is fixed to a central hub (crown) and an external shroud (band), eliminating all gaps and resulting leakage vortices within the runner passage.

Runner geometry was evaluated according to three distinct design criteria, with fish friendliness being the most important, followed by increased power production, and finally reduced supply costs. Although the runner is being developed to provide a new family of fish-friendly hydro turbines for smaller machines across a range of head and flow applications, Alden and Voith Hydro focused the design effort for potential pilot application at a project with operating conditions corresponding to 92 feet of net head with a discharge rate of 1,500 cubic feet per second (cfs).

Calculations show that the improved flow environment through the final turbine is expected to produce significant efficiency improvements (5% at the design conditions listed above) with the same or slightly improved fish-friendly characteristics as compared with the original Alden concept. While some small performance improvements are predicted for the final distributor, the majority of the efficiency improvement is realized in the final runner and draft tube as a result of the improved runner-draft tube interaction at the selected design condition.

Results of the hydraulic testing also were incorporated into the final sizing of the mechanical equipment. Voith Hydro manufactured the physical model at a scale of 1:8.71 and conducted the tests at a speed of 900 rpm. During testing, a model peak efficiency of 91.85% was recorded. The prototype efficiency adjustment translates into a maximum calculated prototype efficiency of 93.64%.

The final aspect of the developmental engineering included the design for the supporting mechanical and balance of plant equipment for supply of the complete unit. In this phase, finite element analysis (FEA) was performed to determine the static stresses for the stay vanes, wicket gates and runner modifications (see Figure 1). Mechanical design and analysis of the final spiral case and stay ring decks was completed. 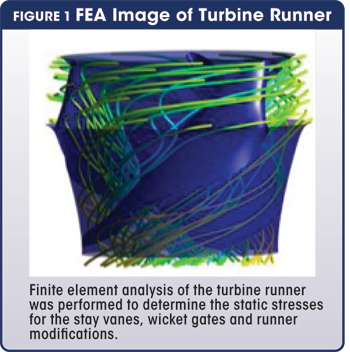 The data on efficiency and power obtained from the physical model testing, scaled up to prototype values, were used to compile the “hill chart” to visually show the best efficiency point (BEP) and range of acceptable operating conditions. CFD simulations of the entire turbine (see Figure 2) were initiated, from the penstock to the draft tube outlet and tailwater. These simulations included the fluid-filled spaces between the outer runner shroud and the casing, as well as between the head cover and runner top, thereby including the same loss sources as in the physical model. 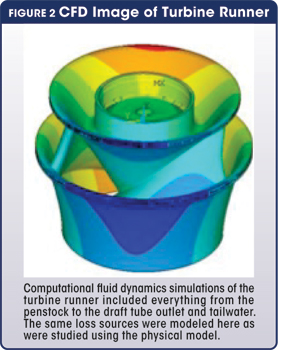 Plotting the resulting efficiencies from the physical model and CFD simulations using non-dimensional head and flow coefficients, which included the turbine diameter and runner rotating speed, aided a direct comparison between the BEP operating conditions and maximum efficiency value. The general shape of the efficiency lines on the “hill chart” was also compared. The CFD hill chart is generally similar in shape to that derived from the physical model test results. However, the CFD model tended to over-predict efficiency for low flows with small gate opening angles. This resulted in displacement of the CFD-derived highest efficiency area to lower flows.

The reasons for these differences are not clear. It may be noted that the plotted efficiency contours are at intervals of only 0.5%, which accentuates visual differences between the contours from the CFD and physical data. The peak efficiency of 93.6% expected for the full scale turbine was well-predicted by the CFD simulations. It is concluded that the CFD simulations are most reliable in predicting the more controlled (coherent) flow patterns near the turbine design point.

This direct comparison between CFD simulations and physical model test data provides useful information for turbine designers and researchers. This kind of validation allows the developed CFD model to be used to explore other issues of concern, such as determining values for local pressures, pressure change rates, shear and the locations where related fish survival criteria are met or exceeded.

Below is a preliminary schedule for installation at a potential test site:

Applicability to other hydro sites

Although the turbine was hydraulically and mechanically designed for a target site condition, it represents a new turbine family with a range of head and flow applications. Figure 3 shows the anticipated turbine application range. 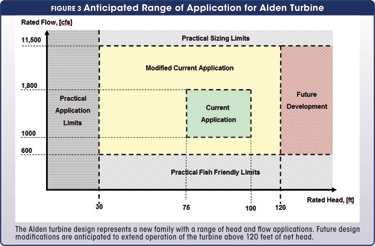 Summary and next steps

The work performed to date has improved the performance characteristics of the Alden turbine while maintaining its fish-friendly characteristics. The preliminary engineering required to make the turbine commercially available has been completed. Design modifications to the turbine components have improved efficiency to almost 94% at the selected design point, while providing the same or slightly improved fish passage survival. These turbine modifications were also selected to decrease manufacturing and supply costs, resulting in a solution that is economically competitive with conventional turbines. The improved turbine is now available for commercial deployment.

In 2011, in response to another DOE funding opportunity announcement, EPRI was selected to receive $1.5 million of support with a cost-share match requirement to install and test the Alden turbine at a site to be determined. (The initial demonstration site was canceled for economic reasons unrelated to the cost of the turbine.) The project’s three-year installation and test plan to verify model test and fish survival predictions are:

– Year 1 (~2013): Final hydraulic design for the demonstration site’s turbine will be completed; a purchase agreement will be implemented between the owner and Voith Hydro; turbine and balance-of-plant equipment fabrication will commence; and preliminary and final demonstration site project design layout, design of mechanical and electrical equipment, and preparation of construction bids will be completed.

– Year 2 (2014-2015): The turbine and balance-of-plant equipment will be completed and delivered; construction of the powerhouse and flow conveyance structures will be completed; the turbine will be installed; and performance test plans (turbine efficiency and mechanical performance and fish survival testing) will be prepared.

– Year 3 (2016-2017): The project will be commissioned, performance testing will be conducted, and the final project report will be delivered.