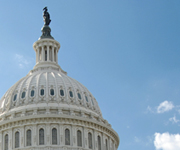 With multiple pieces of hydropower-friendly legislation currently awaiting action in the U.S. Senate and a president committed to using renewables to lower America’s carbon emissions, the addition of hydroelectric-generating components on existing federal facilities seems like a win-win for everyone.

Already, both the U.S. Army Corps of Engineers and Bureau of Reclamation are making concerted efforts to encourage hydropower improvements at their dams and water conveyance facilities, and Congress is working to streamline the process for even more growth.

A panel of officials and executives will meet in Denver, Colo., later this month to discuss the issue.

The session, called, “Development at Federal Facilities in the U.S.”, is part of HydroVision International 2013’s Policies and Regulations track.

The panel will discuss their approaches to development, how projects are impacted by Section 404 and 408 requirements, and how Reclamation’s Lease of Power Privilege works.

“If the Senate does what the industry hopes it will in putting some of these recent bills on President Obama’s desk, it opens a lot of doors developers will want to know about,” said Marla Barnes, event director and publisher of PennWell’s Hydro Group. “This session will better you better understand the process of working with federal infrastructure.”

The discussion begins at 2:30 p.m. on Thursday, July 25, and is one of 73 being offered in HydroVision International 2013’s educational slate that includes seven program tracks, three technical paper tracks and poster gallery.

For more information, or to register as an attendee, visit HydroEvent.com.