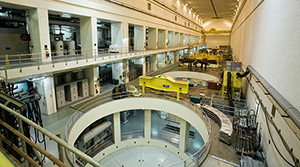 The company is considering two possible locations: a 4,100-acre site in Tazewell County and an abandoned mine in Wise County. The potential generating capacity of the facility has not been disclosed.

Earlier this month, Dominion Energy filed an application for a preliminary permit with the Federal Energy Regulatory Commission for the Tazewell location. The company has contracted with Virginia Tech to conduct the study of the former Bullitt Mine near Appalachia.

“We are on parallel paths with performing studies on these two sites,” said Mark D. Mitchell, vice president of generation and construction for Dominion Energy. He says the company expects to make a decision on which site to advance by mid-2018.

Dominion Energy owns about 2,600 acres of the Tazewell site near East River Mountain. The preliminary permit would allow the company to perform detailed studies of the property and additional parcels needed for the project.

The Bullitt Mine was identified as a potential location based on earlier research by the Virginia Department of Mines, Minerals and Energy. The mine was closed in 1997 and the site is flooded. A new facility could use the mine cavity as the lower reservoir. If this site was selected, Dominion Energy would file a preliminary permit application with FERC in 2018.

Dominion Energy says the preliminary estimate for a single facility could be in the range of $2 billion, and that it could provide millions in tax revenues to counties in the state’s coalfield region. The project would also create hundreds of jobs during construction and up to 50 permanent jobs when complete.

The “on-demand” nature of pumped storage makes it an appealing resource, the company says.

Dominion Energy has a portfolio of about 25,700 MW of generation.

Virginia signed a bill earlier this year authorizing “an investor-owned electric utility” to recover the costs of building one or more pumped storage facility “in the coalfield region of the Commonwealth.”