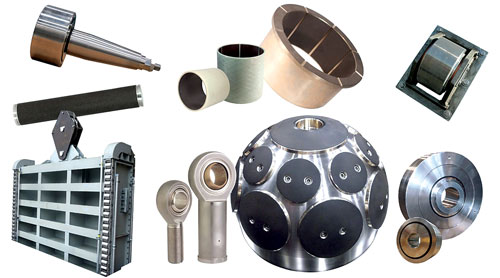 In this roundtable discussion, five hydro project owners and operators provide their perspectives on the use of self-lubricating bearings for various applications at hydropower projects around the world.

Hydro Review spoke with five representatives of hydroelectric power producers from around the world about their use of self-lubricating bearings in their hydropower facilities.

Self-lubricating plain bearings have a lubricant contained within the bearing walls and can run without an external lubricant. There are many forms of self-lubricating bearings. The first, and most common, are sintered metal bearings, which have porous walls. The porous walls draw oil in via capillary action and release the oil when pressure or heat are applied. An example of a sintered metal bearing in action can be seen in self-lubricating chains, which require no additional lubrication during operation.

Another form is a solid one-piece metal bushing with a figure eight groove channel on the inner diameter that is filled with graphite.

A similar bearing replaces the figure eight groove with holes plugged with graphite. This lubricates the bearing inside and out. The last form is a plastic bearing, which has the lubricant molded into the bearing. The lubricant is released as the bearing is run.

This technology is an asset in hydropower.

A study for the U.S. Army Corps of Engineers indicates using self-lubricating bearings eliminates the use of grease lubrication, which lessens the possibility of problems with the environment related to water contamination.1 In addition, maintaining lubricated bearing systems in some applications where access is difficult increases operational costs.2,3

Our sources for this article are:

Nathan Smith, PE, an engineer for Denver Water in Denver, Colo., USA. Denver Water serves about 1.4 million people. Established in 1918, the utility is a public agency and is Colorado’s oldest and largest water utility. Denver Water operates seven hydroelectric power plants at its facilities, generating more than enough energy to power all of the water system’s 22 pump stations, four treatment plants and other major facilities.

Jean-Louis Drommi, electromechanical expert for the Hydro Engineering Center at Electricite de France (EDF). EDF is an integrated electricity company and the largest power producer in France and its hydropower generation accounts for 10% of the company’s power production. EDF supplies energy and services to about 37.1 million customers, 26.2 million of which are in France. EDF generated consolidated sales of €71 billion (US$81 billion) in 2016.

Tyler Barrett, hydro maintenance supervisor for Duke Energy. Duke Energy owns and operates 31 hydropower plants in North America and is one of the largest electric power holding companies in the U.S., supplying and delivering electricity to about 7.4 million U.S. customers. Duke Energy has about 52,700 MW of electric generating capacity in the Carolinas, the Midwest and Florida and operates 31 hydroelectric power plants.

Below is a transcript of this discussion:

Q: How many self-lubricating bearings does your company have installed in your hydro plants, and when did you begin using this technology?

Smith: At Denver Water, we have nine hydropower units and each one of them contains self-lubricating bearings in some capacity or another. I think we started using them about the late 1980s or early 1990s. I know our oldest turbine-generator unit was installed in 1959 and originally had greased bushings on it. We retrofitted it with self-lubricating bearings back in the early 2000s.

Freeman: The Corps’ policy is to replace wicket gate operating mechanism greased bronze bushings with self-lubricating bushings during turbine overhauls/replacements. This has been the Corps’ policy since the late 1990s.

Barrett: We currently have five units at Duke Energy that are equipped with self-lubricating bushings. We have many water-lubricated bearings, many of which were original design.

Tooktoshina: Going through past projects, Thordon material was the original specification in one of our unit refurbishment projects going back to 1982. It would take significant effort to get a log on all of our 23 plants, but all of the turbine-generator units that have been refurbished since 2007 have had Thordon material specified for the wicket gates and wicket gate links.

Q: Regarding the use of self-lubricating bearings at hydro facilities, what is your decision-making process behind choosing this technology (i.e., was there a problem you needed to solve or did you want to adopt this technology for environmental benefits)?

Drommi: For EDF, the decision behind the choice to use self-lubricating bushings is mostly dictated by cost reductions: reduced maintenance cost (no more grease), the long-term lifetime of the bushing, and environmental improvements.

Tooktoshina: In the 2000s, Newfoundland Power used self-lubricating bearings as an environmental initiative for wicket gates because they eliminated the possibility of grease entering into the water passage and moving into the tailrace. This technology also reduced maintenance as an added benefit.

Freeman: The primary goal is the elimination of pollution caused by the leakage of grease and oil to the environment. The secondary goal is to reduce the cost of maintaining bushings (greasing expense and exposure to greasing equipment failures). Self-lubricating bushings selected for installation must have been successfully tested according to a Corps laboratory test procedure, have a history of usage and have experienced no in-service failures.

Barrett: The decision to go to self- lubricating bushings at Duke Energy was a result of other unit work needing to occur and the environmental benefit they add.

Smith: Mostly it’s just reduced maintenance. With the greased bushings, our maintenance personnel have to go out and grease them periodically. With the self-lubricating bushings, our personnel are not tied up always having to be mindful of greasing those and keeping an eye on those. So, it reduces personnel time and also reduces cost.

Q: In what types of equipment are you using self-lubricating bearings?

Freeman: We are using self-lubricating bearings in all the mechanisms that operate the turbine wicket gates, including the wicket gate stem bushings, gate linkage bushings, operating ring guide and thrust plate and servomotor connecting rods.

Tooktoshina: Our primary use for self-lubricating bearings are for wicket gates and wicket gate linkage bushings. We have also used them for turbine guide bearing applications in the past, where they replaced a wood journal.

Drommi: So far, we use the bearings in guide vane bushings and Kaplan runners.

Smith: We’re using them in our hydro turbines, typically for our wicket gate shafts, ports and wicket gate linkages. We have them in valves and gates, like wheeled gates, for the bearings on those wheels. As far as the main bearings for the turbine and generator, those are typically traditional bearings, like hydrodynamic or anti-friction bearings.

Q: What are the benefits of using self-lubricating bearings (e.g., reduced use of lubricants, maintenance requirements, etc.)?

Tooktoshina: We conduct less maintenance, from a preventive maintenance point of view, but also, self-lubricating bearings have increased life and wear properties. Also, there is less use of lubricants, which leads to reduced risk of environmental release. The machinability of the materials is also easy, so we normally keep spares in stock that can be used for multiple plants.

Barrett: The benefit of self-lubricating bearing material is reduced maintenance as they do not require any greasing. The main benefit is the reduced environmental impact. We have not had them in service long enough to prove the durability of the bushings.

Drommi: My answer is the same as my answer to the previous question, with the addition of the fact that there is lesser friction

Smith: For us it is reduced maintenance. It’s kind of a hands off. Especially for the type of application we use it for: components that are seeing lower loads, lower shaft speeds. You are not tying guys up dealing with those. Whereas for the higher load, higher speed, we typically stick with oil for those.

Q: What results have you seen with the use of self-lubricating bearings?

Smith: We have not had any failures. We typically try to do overhauls every 10 to 15 years. And when we pulled those units apart, they were in pretty good condition. So, it’s been pretty successful from a longevity standpoint and also in the reduced maintenance and upkeep of those.

Barrett: It is recommended to design the wicket gate bushings with a quad ring seal (in contrast to an O-ring seal, a quad ring has four distinctive edges) in order to keep any river silt from entering the bushing. If the water quality is poor, the silt can enter the bushing and sand the material away, in turn wearing out the bushing quickly.

Drommi: Our experience at EDF is a bit short to truly answer this question.

Tooktoshina: Desired results have been achieved to date. The bushings from the 1982 project were only removed from service last year, with still some remaining life. However, they were replaced because the machine was apart.

Freeman: Results have been good. Bushings selected based on the results of the Corps laboratory testing have performed without incident.

Q: Do you plan to continue using self-lubricating bearings in your hydro equipment?

Drommi: Yes. That is the way to go, especially for the reduction of oil quantities and oil spill.

Barrett: We plan to continue the use of self-lubricating bearing material on the hydropower units.

Tooktoshina: We continue to specify this material for wicket gate and wicket gate linkage applications when replacements are required.

Tooktoshina: We explore this option for most of our brass-type bushing replacements, including operating ring linkages, etc. Most times, the 10 to 12 week delivery timeframe does not allow for their use during an overhaul that requires one to two week delivery. When wicket gates replacements are planned, that lead time is acceptable in those cases.

Barrett: We may look at trunnion bearings on the butterfly head gates, but that is still up for discussion.

Freeman: We see a potential future application of installing self-lubricating bearings in oil-filled Kaplan hubs to reduce the forces required to operate the blades and to help with stick-slip.

Drommi: Anything that slides is potentially a target for self-lubricating application (such as the embedded side sliding surface of sector gates).

Smith: For expansion and installation of new units, I think we’ll definitely be using them in those applications. As far as existing, I think we have them where we pretty much need them now.

Gregory B. Poindexter is associate editor of Hydro Review.

The audio file at http://bit.ly/2tKaHvi contains an excerpt from Hydro Review’s interview on self-lubricated bearings with Nathan Smith, engineer for Denver Water.