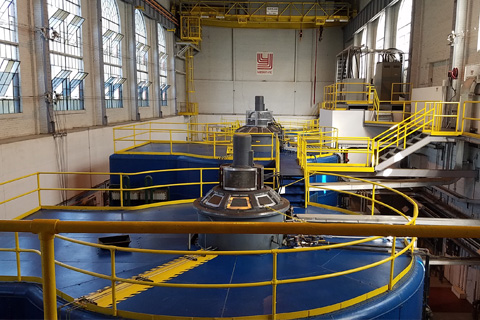 Hydroelectric power is over 130 years old, so what more could be said about it? Apparently a lot.

Hydroelectricity makes up almost half of the industrial-scale renewable energy in this country, yet it does not get the same perks as the “newer kids on the block,” wind and solar. According to our guest, these hydroelectric project repowerings do not get the same regulatory benefits as wind farms, for instance.

That guest would be Dr. Kristina Johnson, co-founder and (former) chief executive officer of Cube Hydro. Before joining Cube Hydro, Dr. Johnson had served as Undersecretary of Energy under President Obama, where she oversaw much of the funds distributed after the American Recovery and Reinvestment Act of 2009.

I interviewed Dr. Johnson over the phone but had a chance to meet her and learn more about Cube Hydro’s operations previously, when I was invited to the Centennial celebration of the Narrows Hydroelectric facility in Badin, N.C., about an hour from Charlotte. During the reception, the neighboring High Rock powerhouse was named in honor of Dr. Johnson.

I wanted to discuss new innovations in hydroelectricity, as well as Dr. Johnson’s thoughts on women in STEM fields. Shortly after our interview, Dr. Johnson began her new role as Chancellor of the SUNY system in New York. I asked her about her thoughts on balancing free speech and the “safe spaces” craze that has gripped college campuses, for better or worse. (This podcast originally aired in September 2017.)