Learn about the state of waterpower generation in Europe, including key trends and important activity. 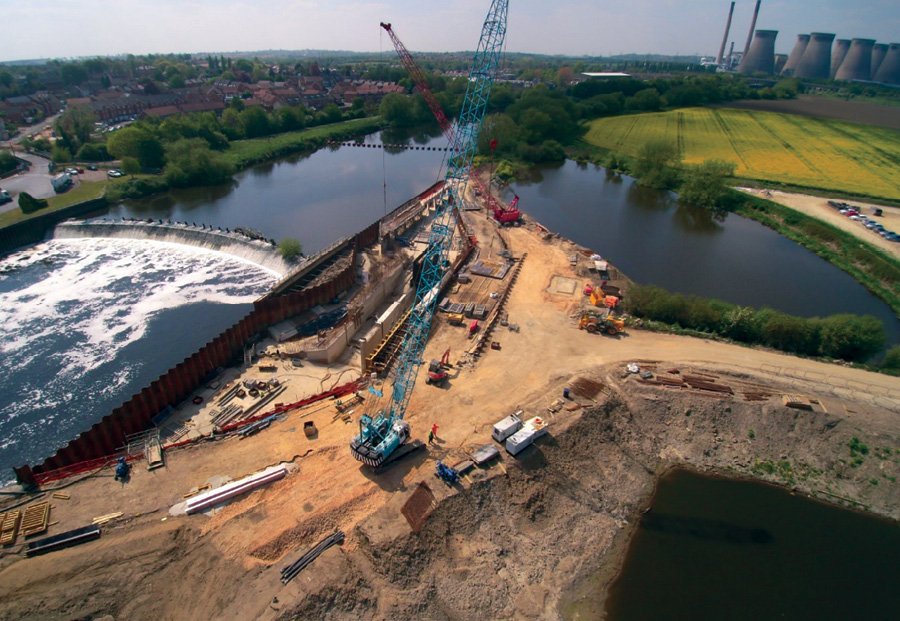 With many European countries leading the way in establishing 100% renewable power goals, hydroelectric power – particularly pumped storage and marine and hydrokinetic energy – is quickly becoming a key consideration in the low-carbon energy mix.

In its most recent Hydropower Status Report, issued in 2017, the International Hydropower Association said renewables account for 29.6% of Europe’s total energy, of which hydro accounted for 10.7%, but both percentages look to increase with continent-wide greenhouse gas reduction milestones set for 2020, 2030 and 2050.

This is already evident in countries like Italy, France and Germany – all of which ranked amongst the International Energy Agency’s top developers and producers of solar and wind generation, per its latest Key World Energy Statistics study, and all of which are also amongst the leaders in European hydro growth.

Wave, ocean and tidal energy also provide an extraordinary source of untapped potential, particularly in the UK, where efforts to build generating sites on a commercial scale have ramped up significantly through recent years.

Perhaps no segment has captured the imaginations of private and public investors more than marine and hydrokinetic energy, given the massive economic windfall the market could create.

While financing for conventional hydro projects remains strong, perhaps no segment has captured the imaginations of private and public investors more than marine and hydrokinetic energy (MHK), given the massive economic windfall the market could create for whichever country should take control of it first.

The UK is particularly keen on establishing itself as a global leader in MHK – in terms of both research and manufacturing – with recent reports from the Crown Estate showing the market could equate to nearly US$7 billion in UK exports by 2050.

Tidal Lagoon Plc, developer of the 320-MW Swansea Bay project in Wales, furthered the case for MHK investments, upping the Crown Estate’s estimates by saying the domestic market alone would eventually be worth $38 billion in combined exports for turbines, generators and associated equipment.

Even at this stage in the development of the MHK market, think tank Marine Energy Pembrokeshire reported investments into the MHK supply chain have already contributed about $30 million for tidal stream energy, $23 million for tidal range energy and $1.5 million for wave energy to the Welsh economy alone.

The UK is not alone in the race to corner this market, however, with France announcing in February that it also intends to make itself a powerhouse in the MHK supply chain through the development of tidal potential along its northern shores.

Acceleration of MHK’s commercial viability has understandably led to a bevy of investments focusing on research and development through the past year, with Wave Energy Scotland, the Marine Renewables Infrastructure Network, the U.K. Coastal Community Fund, and the European Union’s FORESEA and Interreg VA programs, amongst many others, making significant contributions to private companies over the past year.

Europe is perhaps somewhat unique in its continent-wide approach to meeting aggressive decarbonization goals established by the Paris Climate Agreement. As an interim goal, the European Union committed its 28 member states to fulfilling at least 20% of Europe’s total energy needs with renewables by 2020.

This goal, outlined in the EU’s 2016 Renewable Energy Directive, includes conventional and pumped-storage hydro, alongside all forms of MHK. The plan also promotes cooperative mechanisms both in and out of the EU, with an urgency placed on joint projects and support schemes.

European leaders are also working to establish a regional market for electricity through the expansion of power interconnections, which would also likely create new avenues for hydropower as grid operators not only look to protect themselves from the intermittency of other renewables, but to provide power in less developed countries.

This effort is on greatest display in the Balkans, which stand to benefit greatly from European Commission efforts to establish new east-west transmission corridors that would allow for the export of excess power into countries like Albania, Bulgaria, Macedonia and Montenegro.

With hydroelectricity having a long-established foothold both in the UK and Alpine countries, some of Europe’s most notable large-scale new development is taking place in the Eurasia region.

In Georgia, located on the eastern shores of the Black Sea, development of JSC Nenskra Hydro’s 280-MW Nenskra plant continues after significant funding from the European Investment Bank, European Bank for Reconstruction and Development, and Asia Infrastructure Bank was announced earlier this year. Nenskra is one of several hydro plants being developed by private firms in Georgia, with the 23.7-MW Mestiachala 1, 27-MW Mestiachala 2 (owned by a joint venture of the Georgia Renewable Energy Company and Austria’s RP Global Investment called Svaneti Hydro), 333-MW Namakhvani and 100-MW Tvishi (both owned by Clean Energy Group Georgia) also receiving investments or reaching construction milestones through the past year.

Turkey is also home to the 401-MW Main Cetin and 116-MW Lower Cetin plants – both of which remain under construction – although their future was thrown into the lurch in September after a ceasefire between Turkey and the Kurdistan Workers’ Party collapsed. The fighting caused Norwegian developer Statkraft to sell its majority interest in the projects to Turkish group Limak Holding.

Also in Eurasia, Azerbaijan’s focus on developing small hydroelectric resources continues to pay off with the recent commissioning of the 1.5-MW Balakan plant, adding to 14 others with a cumulative capacity of about 15 MW completed over the past several years.

In the UK, developer Barn Energy completed the 500-kW Knottingly plant on the River Aire in England, with the 900-kW Naburn and 1.8-MW Cromwell plants expected to follow suit in the near future.

Also in the UK, London’s Ancala Partners LLP finished work on its 2-MW Loch Eide Mor scheme on the River Leven in the Scottish Highlands, while the company raised the debt facilities for its asset ownership vehicle, Green Highland Hydro, to $63.6 million to further develop its small hydro assets.

“Community hydro” – that is, generally small hydro projects developed with investments from private shareholders – also continues to be a significant emphasis for many countries with the UK. For example, the 123-kW Arrochar Community Hydro project, located near Argyll and Bute, Scotland, is being developed with funding from the general public, with shares available for as little as $350. Power generated by the facility will be sold to the National Grid, with revenues distributed in part back to investors.

Europe is already near the top of the world’s continents in terms of installed pumped-storage capacity, with nearly 51 GW according to World Energy Council data.

Despite the impact pumped storage is already making, however, many European operators are looking even closer at it both as a means of supplementing baseload power and backup for the intermittency of ever-growing wind and solar fleets.

The 99.9-MW Glyn Rhonwy project, under development by Snowdonia Pumped Hydro in Wales, is evidence of this, with the project representing Britain’s first new grid-scale storage facility in more than three decades. The proposal was awarded several key consents by the UK over the past year, leading Snowdonia Pumped Hydro to speculate construction on the project could begin at some point this year should it secure additional funding.

ENGIE also announced an overhaul of its 360-MW Ffestiniog complex in Wales, awarding a $37 million contract to Voith in August to refurbish two of its four generating units. Design, planning and production work is already under way, with Voith saying it expects the on-site phases to begin by the end of this year.

In Bulgaria, Natsionalna Elektricheska Kompania EAD also announced its intention to rehabilitate its 864-MW Chaira plant, opening tenders for the supply and installation of new equipment.

Europe’s conventional hydro projects have also seen their fair share of rehabilitation work through the past year, most recently in Azerbaijan, where upgrades to the 424-MW Mingachevir were completed in February.

Swiss utility Energie Electrique du Simplon SA also finished a $23 million modernization of its Gondo plant that raised its capacity by about 12 MW to 57 MW.

In Georgia, loans totaling about $42.4 million will be used by Engurhesi Ltd. to complete the fourth phase of modernizations at its 1,250-MW Enguri project. Upgrades are to be made to Enguri’s headrace tunnel, switchyard equipment, and penstocks and spillway gate. The money will also be used to repair spillway gates at Engurhesi’s 40-MW Vardnili 2.

Although smaller in scale, Energy Invest Holding is in the early stages of rehabilitating the headworks at its 26-MW Dzora plant in Armenia. The company contracted Poyry in July after noticing damages to concrete structures and mechanical equipment.

Overcoming the economic hurdles of commercial feasibility has always been one of the MHK market’s biggest challenges, but advances by a number of companies in the recent year would indicate the sector is on the cusp of booming.

Much of the discussion is pushed by organizations like the Marine Renewables Infrastructure Network (MaRINET2), which, via funding from the EU’s Horizon 2020 research and innovation program, is driving advances through open calls for R&D opportunities in Scotland. The group awarded $1.5 million to 34 research programs developing MHK-related infrastructure in July and closed a follow-up round of applications in February.

The Funding Ocean Renewable Energy through Strategic European Action (FORESEA) project, with backing from the European Regional Development Fund, also remains a major player. The organization awarded “recommendations for support” to six companies in October and is currently soliciting applications for a fourth and final round of real-world testing.

In terms of actual project development, several made strides toward realization last year, beginning with Naval Energies’ announcement that it will construct a marine energy plant in the Alderney Race near Cherbourg, France.

The region, located off the northwestern tip of the Cotentin Peninsula in the English Channel, holds what is estimated to be the second-largest tidal potential in Europe. Naval Energies seeks to capture some of that potential with what it is calling the Normandie Hydro project. The proposal has previously received funding from the French Environment and Energy Management Agency, which said the plan is to install seven tidal turbines over a 20-year period, ultimately providing a capacity of 14 MW.

To the north, developer Minesto took its first steps toward developing a major tidal energy farm in Wales’ Holyhead Deep by receiving approvals for the installation of a pilot generating unit. The initial 500-kW unit contributes to a lease held by Minesto for a 10-MW installation, al though the Swedish company has said it intends to scale that up to 80 MW.

Also of importance in Wales is the
320-MW Swansea Bay Tidal Lagoon. The project has been in development for more than a decade and was the subject of an exhaustive review published in September, at which point the UK’s House of Commons called upon Parliament to endorse the $1.7 billion proposal. The Welsh government has said it will not offer financial assistance without similar support from the UK, but the UK has yet to take action.