Hydroelectric power is the backbone of British Columbia’s energy mix. More than 85% of the electricity on the transmission grid is supplied by large hydropower plants. The oldest and largest of these hydro facilities is the 10-unit, 2,730-MW GM Shrum Generating Station, owned by Crown provincial utility BC Hydro.

Originally built in the 1960s, GM Shrum is on the Peace River in northeastern British Columbia, about 90 km west of Fort St. John. W.A.C. Bennett Dam impounds the water for the GM Shrum station. The powerhouse is 889 ft long by 154 ft high by 66 ft wide and provides about 25% of BC Hydro’s total electricity production. 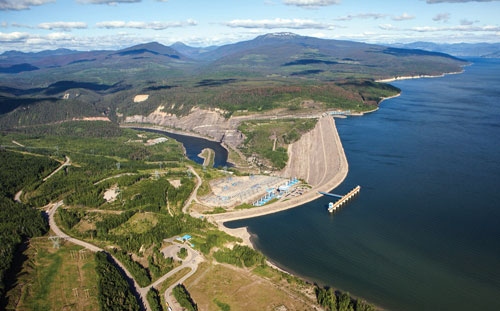 In 2005, BC Hydro embarked on an extensive multi-year, multi-project upgrade of the plant to realize gains in reliability and efficiency for several key generating components and controls. Among the work performed was: electrical upgrades, transformer replacements and unit improvements. Additionally, dam infrastructure improvements including spillway chute repairs and rip-rap upgrades are under way.

GM Shrum is more than 1,000 km from the BC Hydro headquarters in Vancouver and more than 3,000 km from ABB’s project office in Ontario.

Work was to be performed outside of the winter peak demand period. Downtime needed to be minimized, and shutdowns had to be closely coordinated with the grid operator.

About 98% of the electricity produced in British Columbia comes from renewable sources, with 86% produced by hydroelectric stations. More than half of the province’s electricity is supplied from generating stations at three important dams: Mica, Revelstoke, and W.A.C. Bennett.

To ensure that this facility is available and ready for future energy requirements, both the power needed for tomorrow and for the additional 1 million British Columbia residents expected in 20 years, BC Hydro has implemented, or is in the process of implementing, 20 projects to revitalize GM Shrum and W.A.C. Bennett Dam. This article focuses on the station service rehabilitation.

Each of the 10 generating units at GM Shrum is equipped with its own step-up transformer and connected by two 500-kV busbars. The 12-kV station service switchgear assembly is located in the switchyard, with the two incoming power feeds coming from the plant 500-kV bus, stepped down to 12.9 kV (using 20-MVA transformers) and conditioned using a voltage regulator. The 12.9-kV switchgear then feeds the plant 600-V switchgear via four 5-MVA step-down transformers. There are two main 600-V switchgear lineups – one in the powerhouse and one in the substation – as well as auxiliary 600-V lineups for the tailrace substation, spillway substation and intake substation.

Each of the main 600-V lineups is separated into Bus A, Bus B, and Bus E (essential), each backed up by two 900-kW/600-V diesel generators. Powerhouse MCCs, station service transformers, and AC/DC power distribution were also part of the project scope.

Incorporating safety by design was of critical importance to BC Hydro. From the onset, it was the company’s intention that the supplier adopt a safety approach in project execution, from the technical solution to the work performance. The goal was to minimize safety risks to the works and the public as much as possible. To this end, BC Hydro included safety requirements at all stages of the project.

For example, during tender, bidders were required to describe the approach they would take to ensure a safe design and project. During execution, key personnel were required to attend a Safety in Design seminar provided by BC Hydro. Before on-site work began, a full safety analysis was conducted by ABB, including development of a hazard log and assigning ownership for each hazard item.

ABB also incorporated safety aspects into the overall design. A newly-designed type of arc-resistant metal-clad MV switchgear (see Figure 1) that has vacuum circuit breakers was used for this project. ABB’s switchgear includes robust doors, has an internal collection chamber, and uses a plenum chamber to safely vent (see Figure 2 on page 14) the arc-flash-generated gases with minimal damage to personnel or equipment.

All MV and LV switchgear lineups were provided with dedicated ABB arc protection relays. These relays use sensor fiber to optically sense arc flashes quickly and trip the circuit breaker within a few milliseconds.

The transfer between Buses A, B, and E in the powerhouse and substation 600-V switchgear lineups is managed by a relay-based automatic transfer scheme using customer-preferred Schweitzer Engineering Laboratories (SEL) and Beckwith relays, rather than a central controller. This scheme consisted of a series of interlocks and was thoroughly tested prior to delivery to site.

At the time of the station service rehabilitation, upgrading the SCADA system was part of BC Hydro’s future plans. The solution included using smart relays and data concentrators where possible, to make future communications more seamless. The switchgear protection used customer-preferred SEL relays, and an SEL communications processor was included to consolidate data and enable the future control system to connect to multiple relays using a single device.

Each 600-V circuit breaker includes a microprocessor trip unit. These trip units are available with Modbus protocol and were daisy-chained together in the switchgear lineups. Work on the project also included installing an RTU-TCP/IP converter for future Ethernet communications to the upgraded control system.

To best perform the on-site portion of the work, BC Hydro and ABB adopted a site schedule in which personnel worked 21 consecutive days and were off seven days. This allowed the same project team to work together during the installation and commissioning period, which helped ensure continuity and close cooperation. Additionally, this concentrated effort enabled the team to make major progress and achievements in each rotation.

British Columbia’s peak demand period is in the winter and in some cases, certain project activities had to be deferred to the following year. For each generating unit MCC change out, the critical loads were run to the neighboring MCC and powered from its available spare feeders. This approach limited outage time to one day per unit. Once the new MCC was installed and commissioned, the loads were returned to the new MCC, again with only a one-day outage.

All critical loads were fed from the temporary switchgear during replacement of the 600-V switchgear lineup and transformers. Once the new switchgear was online, the loads were returned one-by-one to the new equipment. This did not require any additional outages.

The project used an existing MV ring bus on site to allow half of the existing MV switchgear to be removed while the other half and the tie breaker cubicle remained. This allowed the replacement of one side of the MV switchgear without any power interruption. Each side was installed independently and commissioned.

Design changes were captured in real- time document markups to make sure that updated information was always available. The complete testing of the station service system in 2012 verified that the functionality fully met BC Hydro’s requirements.

Once the GM Shrum upgrades are completed, expected in 2024, generations of British Columbians will have access to reliable power.