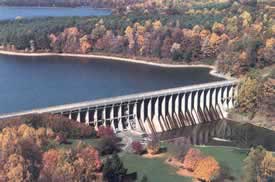 The Federal Energy Regulatory Commission rejected a rehearing request by the licensee of the 400-kW Brighton hydroelectric project, saying Brighton could not escape FERC jurisdiction as a small conduit project because it uses an 80-foot-tall, 995-foot-long dam.

FERC last year rejected an application from KC Brighton LLC, licensee of the 400-kW Brighton project (P-3633) on the Patuxent River in Maryland. KC Brighton had applied to surrender the hydropower license it received from FERC in 1984 and be designated a qualifying conduit project (No. CD14-9) that would be excluded from FERC jurisdiction.

FERC determined that projects seeking complete exclusion from FERC jurisdiction under HREA as “qualifying conduit hydropower facilities” must use a tunnel, canal, pipeline, aqueduct, flume, ditch, or similar manmade water conveyance that is operated for the distribution of water for agricultural, municipal, or industrial consumption and not primarily for the generation of electricity. Further, the power project must not exceed 5 MW and must use only the hydroelectric potential of a non-federally owned conduit. Additionally, the project must not have been issued a hydro license or exemption prior to Aug. 9, 2013, the effective date of the HREA.

In its original Nov. 14 letter to KC Brighton, FERC soundly rejected the Brighton project application, saying the project failed to qualify under the HREA because it includes an 80-foot-tall, 995-foot-long dam, and it was already licensed prior to passage of the HREA on Aug. 9, 2013.

FERC said, as an initial matter, the HREA limits qualifying conduit status to those projects, and project works, that were not licensed or exempted before Aug. 9. Although the dam is leased from the owner, Washington Suburban Sanitary Commission, it has been licensed since 1984.

FERC has created a web page under Hydropower Regulatory Efficiency Act of 2013, http://www.ferc.gov/industries/hydropower/indus-act/efficiency-act.asp, providing guidance to developers on filing a notice of intent to build a qualifying conduit facility, an application for small hydropower exemption, and an application to amend preliminary permit terms.