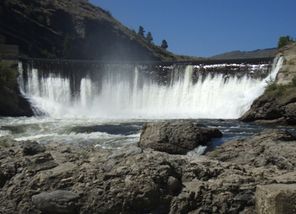 The Federal Energy Regulatory Commission has terminated the operating license issued to the Public Utility District No. 1 of Okanogan County in Washington for construction of the 9-MW Enloe Hydroelectric Project, after the PUD failed to begin construction by the statutory deadline.

This comes as no surprise, given that Okanogan PUD announced in November 2018 that it would not be “reintroducing” hydropower generation at Enloe Dam as initially planned. Enloe Dam originally generated electricity from 1923 to 1958 when it was decommissioned because a transmission line brought less expensive hydropower to Okanogan County.

Enloe Dam is on the Similkameen River near Oroville, Wash.

FERC granted the initial license for the Enloe project in July 2013. The agency subsequently granted a two-year extension of time to start project construction, and in June 2017 Okanogan PUD requested a two-year stay of the commencement and completion of construction deadlines, which FERC granted in September 2017. The licensee had until July 2019 to begin construction.

FERC said the license termination is effective on close of business September 12.