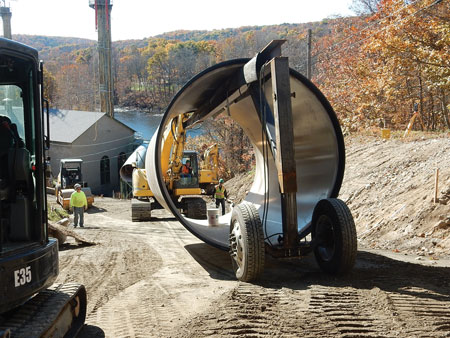 With onerous maintenance requirements for the aged penstocks at its Bulls Bridge plant, FirstLight Power Resources looked at a variety of options and chose to replace both with fiberglass-reinforced penstocks.

By Stuart Piermarini and Erin Boudreaux

In the early 1900s, the New Milford Power Company successfully completed the first commercially viable hydroelectric power plant on the Housatonic River in Connecticut. The project was named Bulls Bridge after the Bull family, which had lived in the region for generations. Ground was broken in spring 1902, and the 8.4-MW plant was in operation by 1903. This historic facility, now owned by FirstLight Power Resources, is part of its five-station hydroelectric operation along the Housatonic River.

Bulls Bridge is a run-of-river facility with a discharge capacity of 1,250 cubic feet per second (cfs). This facility diverts a portion of the river flow upstream of the main dam into a 2.5-mile-long power canal leading to the forebay gatehouse and two penstocks. The pair of original, 420-foot long, 13-foot and 8-foot diameter steel penstocks dropped 98 feet from the forebay to the powerhouse. The plant still generates power with the six original horizontal, double-runner Francis turbines.

The 13-foot diameter penstock rivet seams showed continued leakage, and both pesntocks showed accelerated corrosion in the area where the penstocks’ shells contacted the concrete saddles, which caused holes to form on the shell at the top of the concrete saddles. In 2013 and 2014, numerous metal plate patches and weld repairs were required to mend leaks on the penstocks, but reliability concerns led to the need for rehabilitation or replacement of the hundred-year-old penstocks.

Gomez and Sullivan Engineers of Utica, N.Y., was hired to evaluate the alternatives for replacement or rehabilitation of the steel penstocks. Four alternative solutions were developed and evaluated:

“The alternatives analysis report provided to FirstLight by Gomez and Sullivan recommended either an in-kind replacement of the existing steel pipe or replacement with new fiberglass pipe,” said Ben Sawyer, a civil and structural engineer with Gomez and Sullivan. “FirstLight selected the fiberglass replacement alternative because that alternative was the most cost-effective option that still provided a similar amount of net generation compared to the existing configuration.”

The penstocks were replaced between September 2015 and January 2016 with 10-foot-diameter centrifugally-cast, fiberglass-reinforced, polymer mortar (CCFRPM) pipe. Hobas manufactured 600 feet of this CCFRPM pipe for this replacement project.

Installation posed its own challenges. The steep job site was located in a remote area with a section of the penstock running under an existing highway bridge with low overhead clearance. It was also necessary to construct a temporary road and crane pad to access the penstock replacement area from midway along its route from the forebay to the powerhouse.

An ingenious on-site transportation device used to install the pipe under the bridge was designed by the contractor, Bancroft Contracting Corp. of South Paris, Maine.

“The rig involved a long I-beam connected to a column,” Sawyer said. “The column was composed of two hollow steel square tubes with one sliding inside the other and held in place with steel pins. Wheels were attached to the bottom of the column.

The new penstocks were partially buried two feet above the spring line, utilizing no cradles for support to optimize installation cost. The fill material was placed to about 2 feet above the pipe centerline, leaving 3 feet exposed. The CCFRPM pipe was designed and manufactured with an operating pressure of 50 pounds per square inch (psi) to accommodate the operating pressure of the line.

The penstock was returned to service during January 2015.