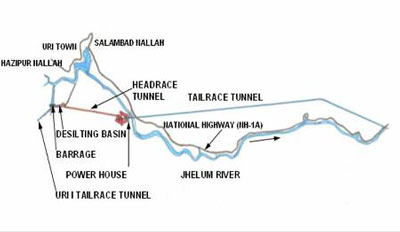 A transformer ignited a fire in the main powerhouse of the 240-MW Uri-II hydroelectric project in the district of Baramulla in Jammu and Kashmir (J&K), India, at 6 a.m. local time on Nov. 20. The fire destroyed part of the powerhouse and forced its four 60-MW generators to shut down at the US$450 million project.

All facility workers are accounted for and there are no reported injuries at this time.

Uri-II is a run-of-river project that has a 52-meter-high concrete gravity dam and an underground powerhouse connected to the dam by a tunnel. The main power station is only accessible through a subterranean tunnel.

Officials on scene reportedly said the initial fire generated such a tremendous amount of smoke that firefighters were unable to reach the powerhouse via the station’s underground access point.

Uri-II was commissioned July 4, 2014, and it is the second power project on the Jhelum River operated by India’s hydro authority, National Hydroelectric Power Corp. (NHPC). It is located downstream from the 480-MW Uri-I hydroelectric project, which began operating in 1997.

According to the Atomic Energy and Alternative Energies Commission and NHPC, the Uri-II hydroelectric project consists of the following: