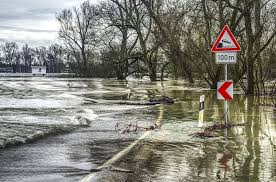 In the first, the earthen spillway dam at the Irving hydro plant in Michigan has failed, according to a report from the Barry County Emergency Management Department on Feb. 23.

The department says it is monitoring the situation and working on getting a better assessment. It says the “river dam” was not affected.

According to Grand Rapids News, western Michigan has been experiencing severe flooding due to heavy rain and warm temperatures melting snow.

Commonwealth Power Company owns the Irving project, but its website provides no specific information on the project.

Data obtained from the Federal Energy Regulatory Commission’s eLibrary shows Irving is on the Thornapple River near Hastings, Mich., and is operated in run of river mode. 2015 data from the Independent Power Producers Coalition of Michigan indicates generating capacity of Irving is 600 kW.

In the second incident, Indiana Michigan Power’s 4.4-MW Buchanan hydroelectric plant was a point of concern with water levels continually rising. News agencies were reporting that Buchanan Dam was reaching its storage capacity and the company said, “People below the dam should be alert to the possibility that it could fail.”

As of Feb. 23 however, the company reported its “previously declared high flow event” was no longer in effect due to decreased flows and lower pond elevations.

That same day, the company said its Berrien Springs hydro plant is still in a high flow emergency.

Buchanan and Berrien Springs are two of six hydro facilities the company operates on the St. Joseph River that provide a total generating capacity of 22.4 MW. All six are run of river, meaning they have relatively small reservoirs and were not designed to store water or provide flood control. Indiana Michigan Power says it will continue to staff these hydro projects around the clock to monitor river levels and dam conditions.

A recent article in Hydro Review provides one utility’s response and lessons learned in the face of flash flooding. Click here to read the article.